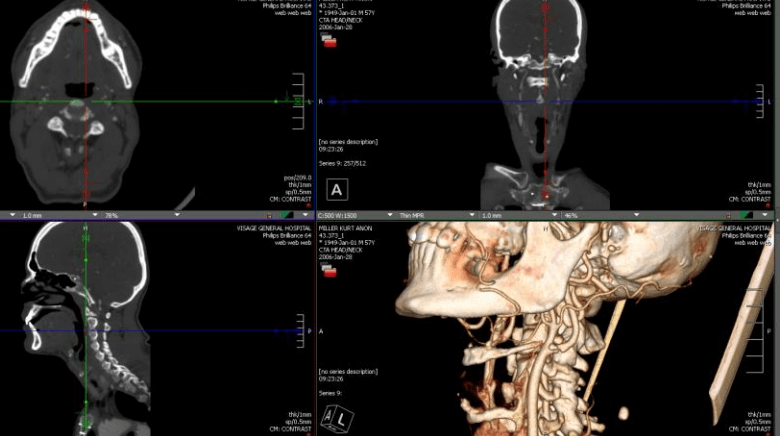 An Ethical Equities Supporter has requested I do more case studies of investments I've made in the past, which I think is good for learning, so here is the first one.

I came across Pro Medicus because I have two beliefs about the long term future.

So I was looking for companies that were working in software and healthcare.

I also look for:

However, on an underlying basis, only made about $1 million in profit.

The big profit was because it sold its part of its Amira business (which it bought in 2009), for a multi-million dollar profit.

It sold the software, but it kept the team of software developers that built the software -- they were now working on software for the visualisation of large radiology files: Visage 7.

Then, in April 2014 it announced a 6 year deal worth $20 million. This was the inflection point.

In July I bought shares. In August it reported profit of $1.5 million (ie, an improvement on the year before, backing out Amira proceeds). It had a market cap of about $90 m, plus over $20 million in the bank.

If you adjust for the cash, it was trading on EV to Earnings of about 46 times -- so it was definitely not cheap on the past metrics. It announced another deal in November, worth $8m. CEO said gross margins on these deals would be around 80%.

The CEO was willing to take time to explain the business to a little-young-nobody like me. My research indicated that both founders sourced some of their energy for life and work activities, from pride and passion. This is important because if majority owners are motivated only by money then they will not share the spoils of success fairly with minority shareholders.

Looking to the numbers; forward gross margins of around $25m had been won in the space of 1 year of launching Visage 7, while the company's entire enterprise value was around $100m.

It was clear if the company kept winning Visage contracts then it was extremely cheap. While I did of course perform a discounted cash flow valuation, the undervaluation this was extremely obvious, given the material gross profit uplift caused by each new contract, and the fact that the company was profitable already. The only it needed to do to be very undervalued, was to keep winning Visage contracts. The key question was whether it would. Given that it was well publicised the entire healthcare industry was moving towards deconstructed picture archiving and communication systems, there was a technological tailwind driving adoption. Thus, further wins seemed likely.

The Journey Since Then

As the company continued to win contracts and grow revenue, the market begun pricing in further wins. Whereas in late 2013 the price arguably reflected announced wins, rather than future wins, by 2019 the price arguably reflects many future wins, including both Visage and the Vendor Neutral Archive product. In this way, the market has become more optimistic and is now willing to pay a higher multiple of (much increased) earnings. You can see in the chart how I've traded the stock over the years. I still hold despite seeing it as too richly valued -- see here for my lament on why.

"The Ethical Equities website contains general financial advice and information only. That means the advice and information does not take into account your objectives, financial situation or needs. Because of that, you should consider if the information is appropriate to you and your needs, before acting on it. In addition, you should obtain and read the product disclosure statement (PDS) of the financial product before making a decision to acquire the financial product. We cannot guarantee the accuracy of the information on this website, including financial, taxation and legal information. Remember, past performance is not a reliable indicator of future performance."