Disinfection specialist Nanosonics (ASX:NAN) has posted another record set of numbers for the first half of 2019, with revenue climbing 36% higher to $40.7m. Pre-tax profit was 195% higher at $11m. You can see in the chart below that the company has quite lumpy profits, but there’s no denying the revenue was good this half. 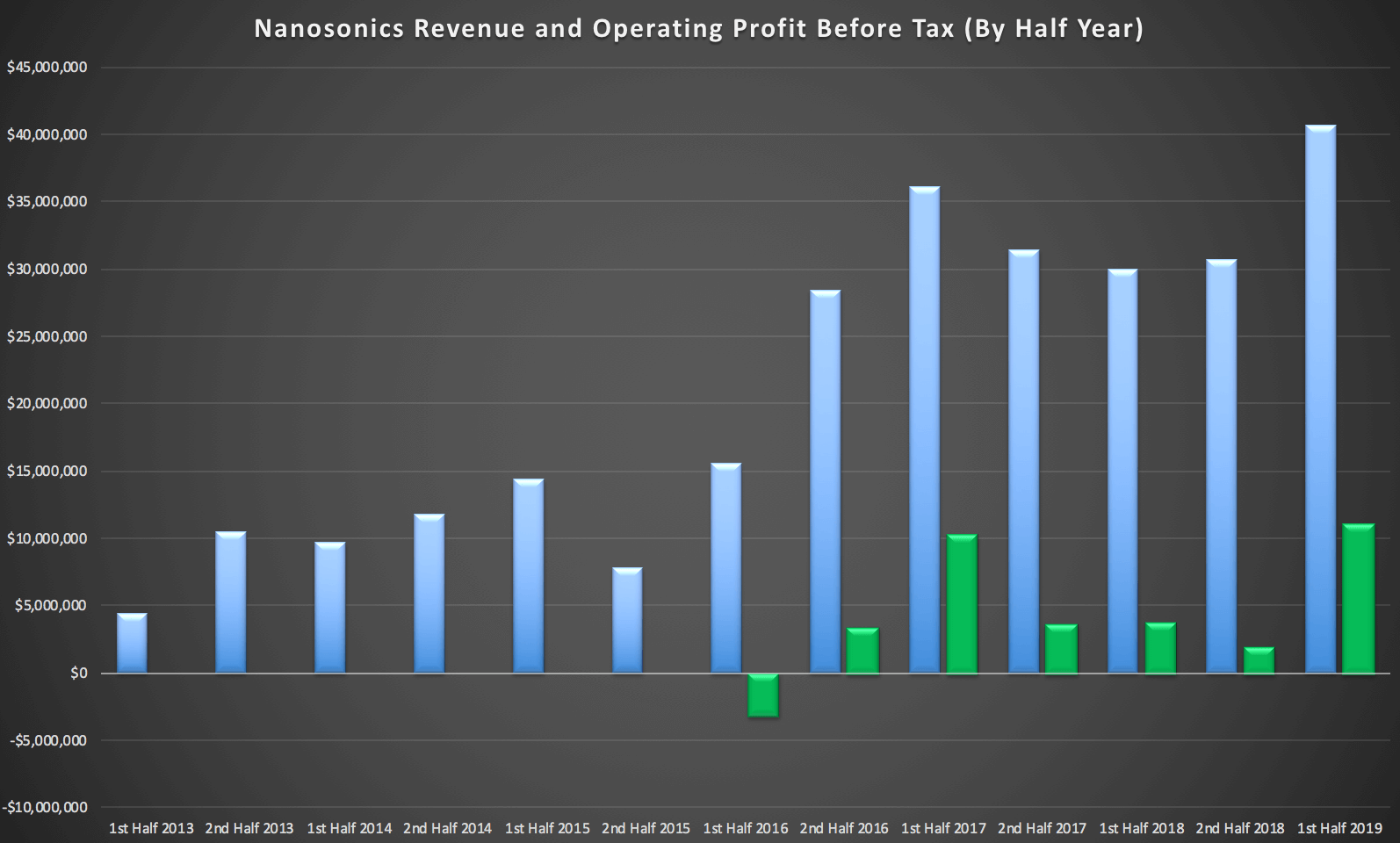 Driving the gain was a 20% boost to the installed base of the groups main product (Trophon), which now sits at 19,310 units, as well as a 59% rise in the level of consumables/service revenue. Indeed, the latter is an especially encouraging result as it is here that Nanosonics derive the majority of revenue (~60%), has the best margins, is recurring in nature, and for which there remains significant pricing power.

Remember, too, that from July this year management have indicated they expect a “material” increase in both volume and margin for consumables, as the new distribution agreement with GE comes into effect.

Looking across the various operating geographies, Nanosonics reported strong, double-digit gains in all areas, with the US (easily the largest at over 90% of revenues) reporting the strongest increase with revenues there up 37% on the previous corresponding period, and consumables sales up 64%.

Encouragingly, for the full year, management expect the North American installed base to expand by a similar amount to FY2018. That implies a fleet of over 18,500 by July 1, 2019. Given my estimate of annual consumables sales per device, that would indicate a full year revenue run rate of over $50m for the US alone at year’s end.

As you can see below, the installed base is still growing, but the rate of growth is decreasing, with just 1400 added in the last half, down from 1520 the half before. When you consider that Nanosonics has only 43% of the potential market opportunity in North America, and has barely entered into other key geographies, you can begin to see why the market has been prepared to give shares in Nanosonics such a hefty premium. For example, the business estimates it has only 2% of the total addressable market in Europe and 4% of the Asia Pacific market.

Then we have the launch of new products (the first of which is expected in another 16 months or so), the replacement cycle for older units, and increased pricing and margins. Oh, and the business remains debt free with an increasingly large mountain of cash -- about $71m as of the latest half.

All that being said, there are some things to be mindful of.

The growth in revenue was exacerbated by the fact that the previous corresponding half was depressed due to the then imminent release of the next generation Trophon product. Resellers were running down inventory and customers delayed orders in anticipation of the newer device, which saw HY2018 revenues slump ~17% from a year earlier.

In comparison to first half 2017, revenues for the latest 6-month period were a more modest 12.7% higher. That’s an annualised growth of ~6%.

Further, although the installed base is still expanding strongly, the pace of growth continues to slow. At the end of FY2018, the annual growth in the Trophon fleet was 25%, or 11% over the preceding 6 months. That compares to 20% and 9%, respectively, for the latest half.

Of course, that’s nothing to sneeze at, but we must be mindful that the lower hanging fruit is typically picked first, and that growth rates always moderate as businesses penetrate further into maturing markets.

The real concern for me, however, has nothing to do with the business. Following a warm response by the market to the latest results, I fear shares are priced for perfection -- and then some.

Now, it’s usually a mistake to get too fussy with high quality, fast growing companies that enjoy very large and untapped addressable markets. Especially for those that can grow the top-line without a corresponding boost to operating costs.

That being said, on a pro-rata basis, shares in Nanosonics are trading at ~15x sales. Based on full year guidance for operating costs, and making some reasonable assumptions around margins and sales growth, the company is on an EV/EBIT multiple of over 100.

Let’s cut it another way. Assume that the installed base continues to grow at 20% per annum for the next three years, and the company lifts its average consumables sales per device to $3000 per annum. We’ll add in $20m in capital sales, apply a operating margin of 75% and keep the cost base unchanged at $50m per annum.

Even with these (very) ambitious assumptions, we’d need Nanosonics to attract an EBIT multiple of at least 30x in 2022 for the current market price to represent reasonable value.

That’s not impossible. Indeed if Europe or Asia experience the same kind of traction as we’ve seen in the US, or new products enjoy a similar success to the Trophon device, we might be under-baking things. But the fact is that a lot of things need to go right for investors at today’s price to get an adequate return on investment. And although new products and geographies hold great promise, they invariably bring added costs and risks, too.

I’m also mindful that nothing attracts competition like high margins and staggering growth. Despite a solid competitive lead and various patent protections, it’s difficult to imagine that Nanosonics will have this market all to itself indefinitely. In the long run, everything is a toaster.

As much as I’m a fan of the business, and it remains a major holding, the risk/reward proposition is becoming far less compelling. So while there’s a real danger in being too fussy with these things, it’s equally reckless to ignore all valuation considerations entirely. It's certainly nice to see the share price action given the stock has proved popular with Strawman users, ranking on the market-beating Strawman Index, even prior to these results.

Disclosure: Andrew Page and Claude Walker own shares in Nanosonics at the time of publication. Neither Claude nor Andrew will trade NAN shares within 2 days of publication of this article. This article contains general investment advice only (under AFSL 501223). Authorised by Claude Walker.