Community-based healthcare roll-up, Zenitas Healthcare Ltd (ASX:ZNT), released its results as well as news of a takeover proposal on Friday in chaotic fashion. The stock went into a trading halt before the market opened amid reports of an offer to acquire the company in the Australian Financial Review. It then traded in two short intervals following the release of its annual report but prior to confirmation of the takeover bid. Anyone who sold their shares during these periods would be pretty angry given the stock was trading around 10% to 15% higher following the crucial news. The ASX should reverse all trades that took place before the offer was announced.

But it’s not particularly good news for those who managed to hold onto their shares either. The takeover proposal is an all cash offer for $1.46 per share adjusted for a final dividend of 1.5 cents. This equates to an enterprise value (EV) of roughly $122 million.

Management did not provide guidance with today’s results, preferring instead to wait until the company’s AGM on 23 November. The only problem is that shareholders are due to vote on the Scheme Implementation Deed in mid November. Shareholders will have to make a decision on whether to sell without any profit guidance for 2019.

Management did provide pro-forma figures which assume a full-year contribution from various acquisitions executed during the year. These are revenue of $130 million and earnings before interest, tax, depreciation and amortisation (EBITDA) of $19 million. The company delivered organic EBITDA growth of 7.3% in 2018 and if we assume a similar performance in 2019, then EBITDA will be over $20 million. After minority interests of $4 million, it seems reasonable to assume that the business is on track to generate over $16 million of EBITDA for owners in 2019.

Therefore, today’s offer implies an EV/EBITDA multiple of 7.5. I think this significantly undervalues the business. According to management, there remain plentiful opportunities for the company to continue to buy up private allied, primary and home care businesses at between 4 and 6 times EBITDA. These would provide terrific returns for investors if, like the businesses Zenitas has acquired to date, they are not only acquired on such high earnings yields but are also growing 5% to 10% organically each year.

Underlying historical figures demonstrate strong growth in earnings-per-share (EPS) suggesting that the strategy is working well. Underlying figures strip out various “one-off” acquisition related costs and should be taken with a pinch of salt but are the best information available.

The graph below requires a little explanation. I calculated a proxy for EPS using the underlying EBITDA figures provided by the company less depreciation, non-controlling interests share of profit and interest.

I did not adjust for tax because Zenitas’ tax rates have fluctuated from half to half. For example, it earned a tax credit in the second half of 2017 and incurred an 18.4% charge in the first half of 2018. I could have applied a 30% tax rate to all periods but since the non-controlling interests are stated after tax, this could also potentially distort the picture. Clearly, tax is a real cost that reduces shareholder profits and the following chart is intended to provide a sense of the underlying trend rather than absolute figures.

The data point for the first half of 2019 is my estimate based on pro-forma run-rate figures provided by Zenitas. 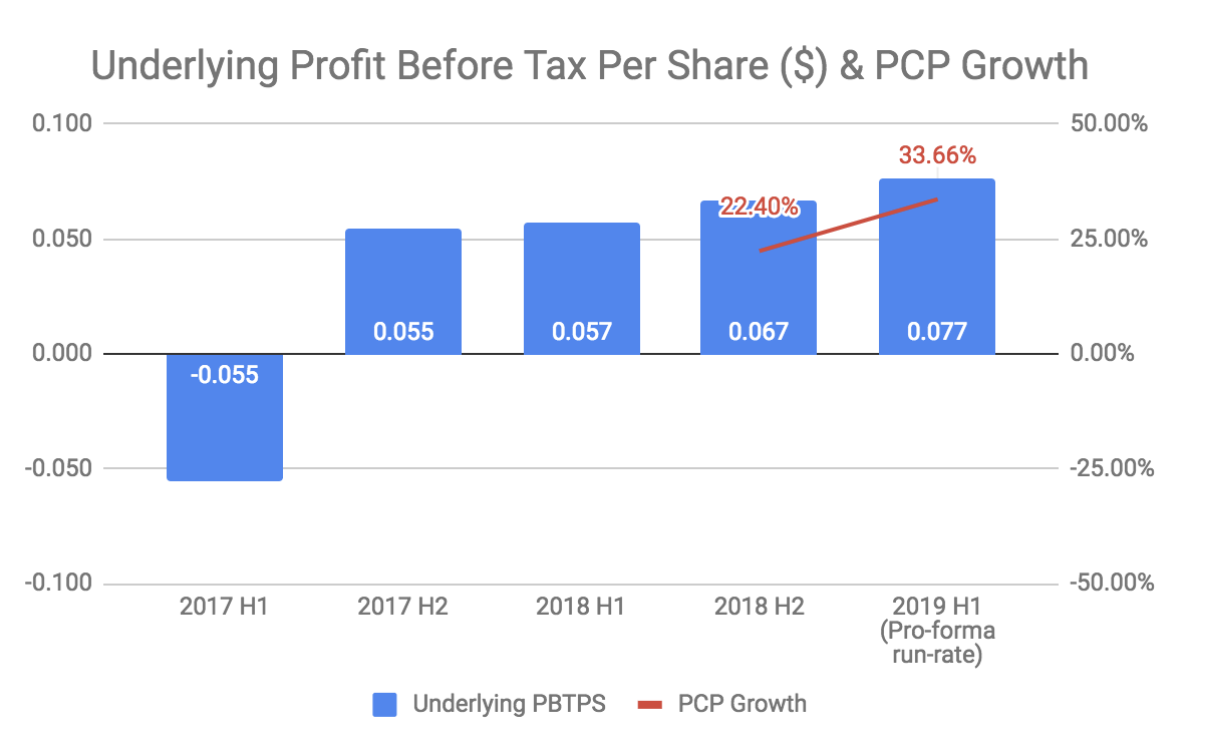 This impressive EPS momentum is not the result of using excessive leverage given the company remains conservatively geared. Net debt is around $12 million versus the pro-forma EBITDA run-rate after minorities of $15 million. Indeed, Zenitas has recently secured a new $68 million facility with NAB replacing an existing arrangement with Westpac thanks to the strength of its balance sheet. This will provide further funding capacity for acquisitions.

Zenitas is now reaching a scale where it can potentially harvest cross-selling synergies across its national network of home, primary, allied and mobile healthcare providers. The trend towards community based care is also still in its infancy.

Yet despite Friday’s takeover proposal arguably undervaluing the company, it has received the backing of the Zenetas Independent Board Committee (IBC). Two board members were unable to recommend the offer due to conflicts of interest (hence the need for the IBC). One is Jonathan Lim, the Managing Partner of Liverpool Partners who are part of the takeover consortium. The other is Zenitas Chairman, Shane Tanner, who is an upstream investor in one of the entities managed by Liverpool Partners which proposes to acquire Zenitas shares.

One member of the IBC, Dr Jonathan Seah, is also chairman of China Medical & HealthCare Group (CMHG) which owns 10.9% of Zenitas. It seems unlikely that CMHG will submit a counter proposal given he has given his support as part of the IBC which unanimously recommends the offer.

There are unlikely to be other bidders either. A caller on Friday’s conference call highlighted that the Scheme Implementation Deed specifies a window of 10 working days in which to receive any counter proposals. This means any other potential suitors would have limited time to carry out due diligence.

I suspect that the scheme will go ahead, but intend to hold for a couple more weeks to at least find out if a competing bid emerges. The only reason I may not hold to cast a vote is if I need to free up capital for other opportunities. I will not sell within 2 trading days of publishing this article.

Note from Claude: I would not be buying shares at the current price, since the most likely outcome is that the company is taken over at a measly 2.8% premium to the current price. There is some possibility of a higher bid, but the way this has been structured leaves me without confidence that  the company is taking the optimal approach. In my opinion it would be better if there was a vote on the scheme after giving guidance in November. I will not sell within 2 trading days of publishing this article -- but I am very likely to sell for at least $1.40, some time after that (albeit not immediately).

Ultimately, this is a somewhat decent outcome for investors; and the thesis for investing is drawing to a close.

Disclosure: Matt Brazier and Claude Walker both own shares in Zenitas at the time of publication. This article contains general investment advice only (under AFSL 501223). Authorised by Claude Walker.

I believe its an opportunistic bid which involves the founding Chairman and other founding director (both whom will be very informed about its future prospects).
The business is starting to gain scale and efficiencies in a sector which has a large tailwind and recent share price weakness which is probably due to communication and setting of acquisition settlement timelines which need not have been made or should have been more conservative.
I agree that FY19 guidance should have been given at the FY18 results (it was last year) to allow the owners of the business to make a fully informed decision at the scheme meeting/vote. I believe Management/Board would have line of sight to provide this information. On run rate numbers/very little growth factored in, this offer appears to me to be at around 7-7.5x FY19 EV/EBITDA (post minorities). The arrangement of a large debt facility (going from 20M+ to 60+M) at a 2% lower interest rate indicates to me some decent sized acquisitions lined up and hence growth prospects. Again I would have liked more detail around the pipeline (which was given at H1FY18 results).
For reference Richards (ex-Greencross founder) is listing Healthia (roll up of MyFootDr podiatry and Balance Physio- mostly QLD) sometime this month. Its listing at a 9XFY19 EDBITDA without any ASX trading history.
The question to ask is why would ZNT shareholders want to sell to a very informed bidder, at this price, when a lot of the hard yards have been done.
Its interesting to also note that this offer is below the share price targets set by their 2 house brokers prior to results/bid. In an updated report by one of them this morning, it states that the offer is 10% below their DCF valuation (which does not factor in large growth/further acquisitions). Where is the control premium?

Thanks for your comments. I know you have followed this company closely for some time and it is always good to read informed views.