I first started thinking about bee populations as a result of Select Harvests Limited (ASX: SHV) because bees are required for the pollination of almond trees.

That process (some time ago now) lead me to Capilano Honey Limited (ASX: CZZ) which divides analysts and commentators into two camps. Those who avoid the puns, and those who spread them.

Edit: Before I get back into the puns, the key questions on my mind are:

The truth of the matter is that I don't have access to my computer so I can't look at my valuations right now, but from memory I got a buy price for Capilano of about $5.40 - $6.00 depending on my inputs. I've recently bought shares at $5.70 because the company announced a dividend of 20c. However, the company is ex div tomorrow so by rights it should drop 20c in price although we will see about that.

The main point of this post is to address the concept that the apiarists make up 35% of the shareholders and this apparently is a problem. People say it is a problem because the company might have an attitude of paying the beekeepers too much. However, because the main constraint on the business is honey supply, I personally think it would be a terrible idea to squeeze apiarists. 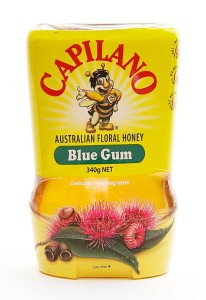 Apparently there is a buzz about the stock, because $10 million worth of shares crossed today at $5.75. 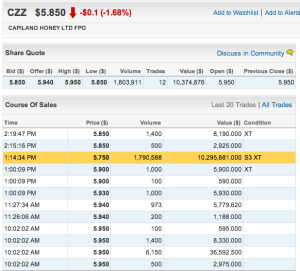 Back to the sticky subject of the apiarist shareholders - they are already selling down. Having seen their shares double or more, it is only natural that they may take some profits. However, they cannot control the company with just 35% of the vote, so I am not too worried about that. In any event, shareholder apiarists would oppose overpaying for honey because it would benefit non-shareholder apiarists at their expense. I am happy to part own their company. They built it and are essential to its success.

That's because honey production is declining everywhere for a number of reasons, pesticides being the main one: they are, after all, designed to kill. In the USA, they have experienced colony collapse because they mistreat their bees and have horrible agricultural practices, but don't get me started. Chinese honey is abundant but unacceptable to people who are sane and understand the risk it will be tainted with antibiotics (used to keep the abused bees healthy) and heavy metals.

Bottom line is you need to love bees to produce good honey, or at least love something about it. It is extremely complicated and physically demanding. It also requires patience. Australian (and NZ) apiarists make some of the best stuff.

Edit: It's also worth noting that we do not have enough Australian honey. Capilano sells cheap (possibly) Chinese or (more likely) Argentinian honey through its Allowrie brand. It has historically imported from Argentina, but the packet just says "imported". I don't like that they do this but there is little choice, especially given some Australians are unwilling to pay for decent produce at the supermarket. This is ridiculous given they will happily buy McMansions, multiple new flat-screens, and gas guzzling SUVs. In any event, there is a serious lack of pure Australian honey, because bees are so delicate - so you either pay up, or eat the inferior imported stuff.

Bees need a clean environment, plenty of flowers and it has to be warm enough to make lots of honey (above 18 celsius) but not too hot either (you don't want it to get above 36 degrees or the little bees become distressed). This is, obviously, the main risk for Australia because summers are getting hotter and hotter. Last year, hives were collapsing because the wax was melting. It is very important that hives are located in a cool spot. There are also a litany of other threats to hives.

El Nino (70% probability) brings on drought and hot weather, which means that Eucalypts don't flower as much. That means that if we go into El Nino, the chances of a honey production rebound are very low. Therefore, if and when El Nino is confirmed, I may look to reduce my Capilano holding.

I didn't go long almonds, nor sandalwood, nor salmon, nor graphite. I went long honey. I wonder how that will turn out.

Update: I was overweight CZZ due to a fit of excitement. I've since reduced to a normal position size (at a profit) due (in part) to the steady accumulation of evidence that El Nino is coming. Still holding.

The author owns shares in Capilano Honey. Nothing on this blog is advice, ever, and may even be plain wrong. The purpose of this blog is to document my thoughts on different companies in an easily accessible way and to make connections with likeminded investors. Edit: Subscribers to the Free Newsletter were sent this post in a monthly newsletter as soon as it was published. Since then Capilano Honey is up over 18% in just over a month.

Pretty embarrassing that I chickened out of my extra large position.

Got to have a bit of conviction!