Why Freedom Insurance Group Ltd (ASX:FIG) Is A Sell

Freedom Insurance (ASX:FIG) is a company that sells insurance through a direct sales model. This article will argue that the buy thesis propounded by a substantial shareholder (who still owns over 10%) was weak when published and is proven wrong today. I do note, however, that I have made worse mistakes.

“Freedom’s name is slightly misleading. This company does everything in the direct-to-customer life insurance market other than writing insurance policies. It creates the product, markets and distributes that product and administers policies. When it comes to writing insurance risk, though, that is handed off to Freedom’s partner Swiss Re.”

While I agree that Freedom’s name is slightly misleading, the similarities in our analysis end there.

What the shareholders do not write about, of course, is that Freedom is a company that has been quite aggressively pushing low value funeral insurance. Not long after the company listed, I signed up for a quote. It became clear to me, quite quickly, that the quotes were not good value. So I stopped looking at the stock.

Going back to basics, let’s take a look at the kind of offers Freedom is advertising on its website: 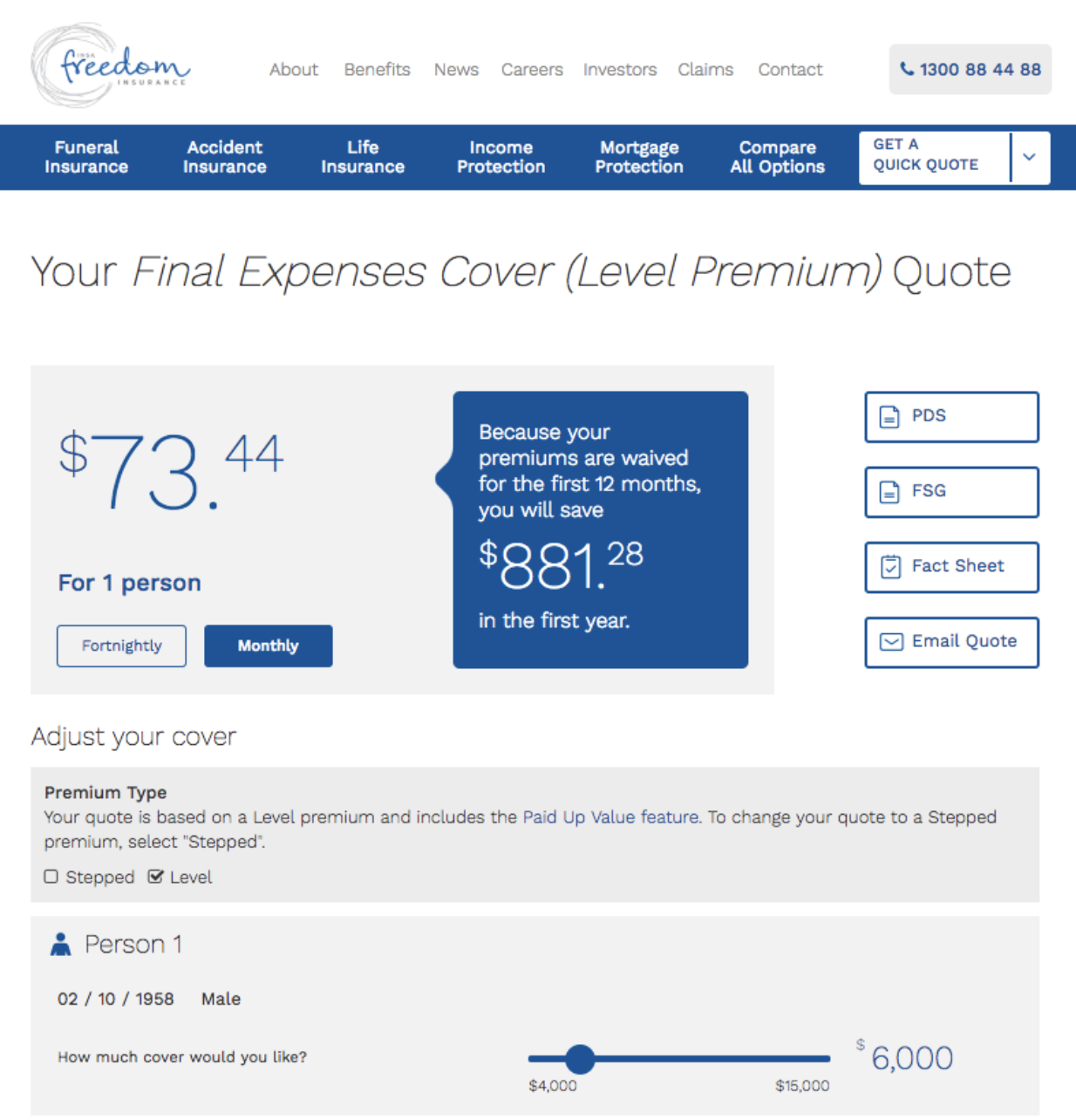 Here is a quote, also for a 60 year old male, from Suncorp for comparison: 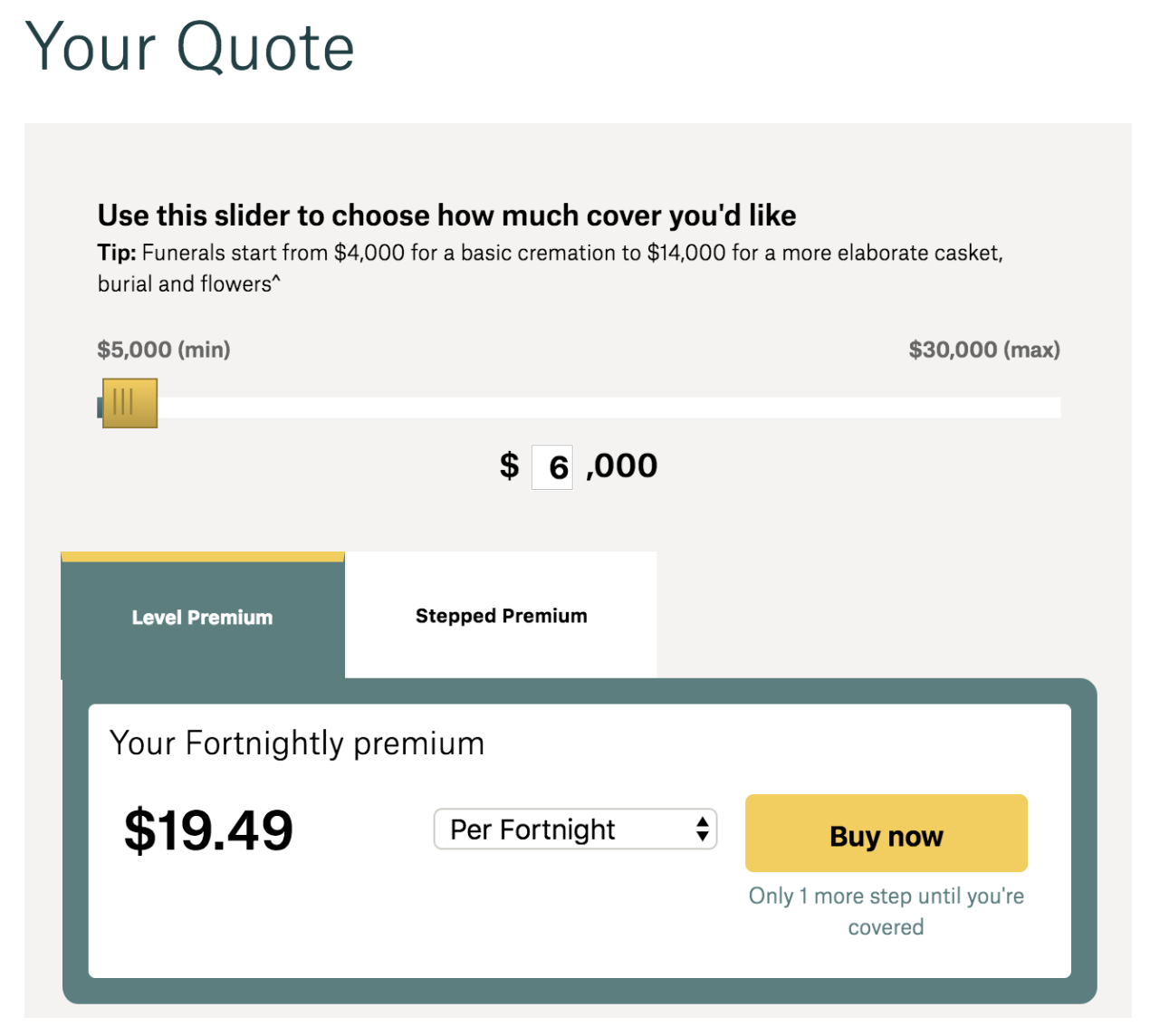 It’s not surprising that when I challenged one vocal and bullish Freedom Insurance shareholder to buy a policy himself, he fell silent.

Why does it matter that Freedom policies are not compelling value?

Well, this is apparently a core tenet of the buy thesis, as propounded by the substantial shareholders I mentioned before. They say:

“The banks and their related parties are under significant political and regulatory pressure due to poor customer outcomes... Commissions have been high, prices poor and policies difficult to understand. As a result, nimble players like Freedom should continue to win market share.”

To this day, I find it strange that someone would write this sort of coverage of Freedom Insurance, when the company sold a similar product at much higher prices than the banks. The truth is that it is Freedom who have been selling insurance at high prices, with difficult to understand policies, including to an intellectually disabled person.

“Freedom should grow”, the major shareholders argued, “even without disrupting the industry.” It’s unclear if the disruption they were talking about means ignoring community standards of behaviour, but I’d assume not.

In contrast to this analysis from a major shareholder, Freedom today announced that -- far from growing -- they would drastically reduce their business. Specifically:

“Based on detailed analysis, the Freedom Board decided to implement a restructuring of the business involving the following elements:

So it’s fair to say that the thesis expounded by one large institutional shareholder is broken. And unlike the (former) CEO, this shareholder has not yet reported any sale of shares. So we know that this large shareholder has two options. One, sell at a massive loss, or two, rewrite the thesis to suit the (now drastically discounted) price.

If they rewrite the thesis it will rely on the trail commissions. To quote again from their thesis:

“The upfront commission and the present value of this entire stream of future payments are both booked immediately as revenue. So in the early years of its existence, the company reports revenues well in excess of actual cashflows. As it matures they should roughly match. And if it stops writing new policies the cashflow will continue flowing for years despite not reporting any accounting revenue.”

However, this assumes that the future commissions have been correctly valued when booked as revenue. It would be reasonable to assume the value of these trail commissions will be impaired if Freedom is compelled by the Royal Commission to make it easier for customers to terminate their policies.

According to the AFR, only a small portion of those who have in the past called up to cancel, succeeded. They say:

“The data showed there were 37,584 calls made to cancel policies in a period of about 12 months. Freedom was able to identify that 28,455 of these calls came from its customers, so it was on this cohort that Orr focused.”

If we assume that 10,000 non-customers miraculously called to cancel policies, then the retention team were still enormously “successful” for their major shareholders. To quote the AFR again:

“But calling up to cancel and actually getting out of a policy were two very different things. Of that 28,455 calls, only 8118 calls resulted in the caller successfully cancelling the policy.”

Well, it means that even after Freedom Insurance sold insurance to a young man with Downs Syndrome, “It took two phone calls and an email from Mr Stewart [his father] before Freedom eventually cancelled the policy.” The current CEO of Freedom admits that it should have been obvious that the young man was disabled, to the original salesperson.

The point here is that the company culture, under the prior CEO and CFO (who have both now resigned), made it hard for people to quit their policies.

I submit that for the book value of those trail commissions to be realistic, you must believe that the regulator and legal system in Australia are so inept, that they will allow Freedom to continue to make it very difficult to cancel these policies. I submit that such a bet is a poor one.

And so the question becomes; what value remains with Freedom shareholders?

I think the answer is close to zero.

The Consumer Action Law Centre submission to the Royal Commission outlines a number of potential causes of action against Freedom insurance. For example, they submit that “Freedom engaged in unconscionable conduct through its systemic practice of selling particularly low-value insurance, combined with a culture and incentive programme that encouraged the use of high pressure sales.”

Further -- and importantly for shareholders -- the CALC submits that the company engaged in “Misleading and deceptive conduct,” such as the “Description of insurance as ‘free’ in sale of insurance to Mr Stewart’s son”.

It would seem screamingly obvious to me that there is the potential for a class action against Freedom Insurance. This would require evidence that this line about “free” insurance was frequently used.

If Freedom is sued for its conduct, in a class action, and the ‘retention’ team is forced to make it easier to cancel policies, then I doubt there will be much left for shareholders.

To hold Freedom shares is a bet against justice, in my view. The value of the net assets of Freedom was about $100 million at the end of June 2018. Liabilities were $35 million.

So, being generous, the net book value is around $67 million (Note: corrected), versus the current market capitalisation of $31 million.

Once you factor in redundancy costs, and the risk that the $73 million “net present value of trail commission” will be written down, I think it is reasonable to argue that Freedom Insurance is very overvalued.

Once you consider in the potential for a class action, then the possible downside is close to 100%, in my opinion.

I avoided Freedom Insurance in part because I object to the impact it has on society, but I don’t think it is good value, anyway.

Please feel free to sign up to the forums and let me know what you think!

The Author of this piece, Claude Walker, does not own shares in Freedom Insurance. This article contains general investment advice only (under AFSL 501223). Authorised by Claude Walker.

Forager? I read their blog and respect their opinion but they got this one wrong.