This growth was assisted by the acquisition of Destinations of the World (DOTW) during the period as well as a full six months contribution from JacTravel acquired in the prior corresponding period. Stripping out the effect of acquisitions, revenue was still up an impressive 21%.

The balance sheet remains strong with $159.5 million held in cash excluding client funds and total debt of $212.9 million, which is more than comfortable in light of the profit figures above.

On the surface, cash flow was weak with operating cash outflow rising 80% to $26.1 million and free cash outflow before acquisitions up 47% to $40.1 million. However, the disparity between cash and profit can largely be explained by a one-off payment to suppliers of $53 million relating to 2018 expenditure. This was flagged back in August and there was a corresponding higher than expected cash inflow in the second half of 2018.

After taking this into account, profit roughly matches cash flow but there are also acquisition related reconciling items so the picture remains clouded. Such opacity in the accounts is typical of most acquisitive businesses and is an additional risk that investors in these types of stocks must bear. Also note the company has previously had conflict with its auditors, so it’s fair to say that it is hard to follow the accounts - there is some risk here. 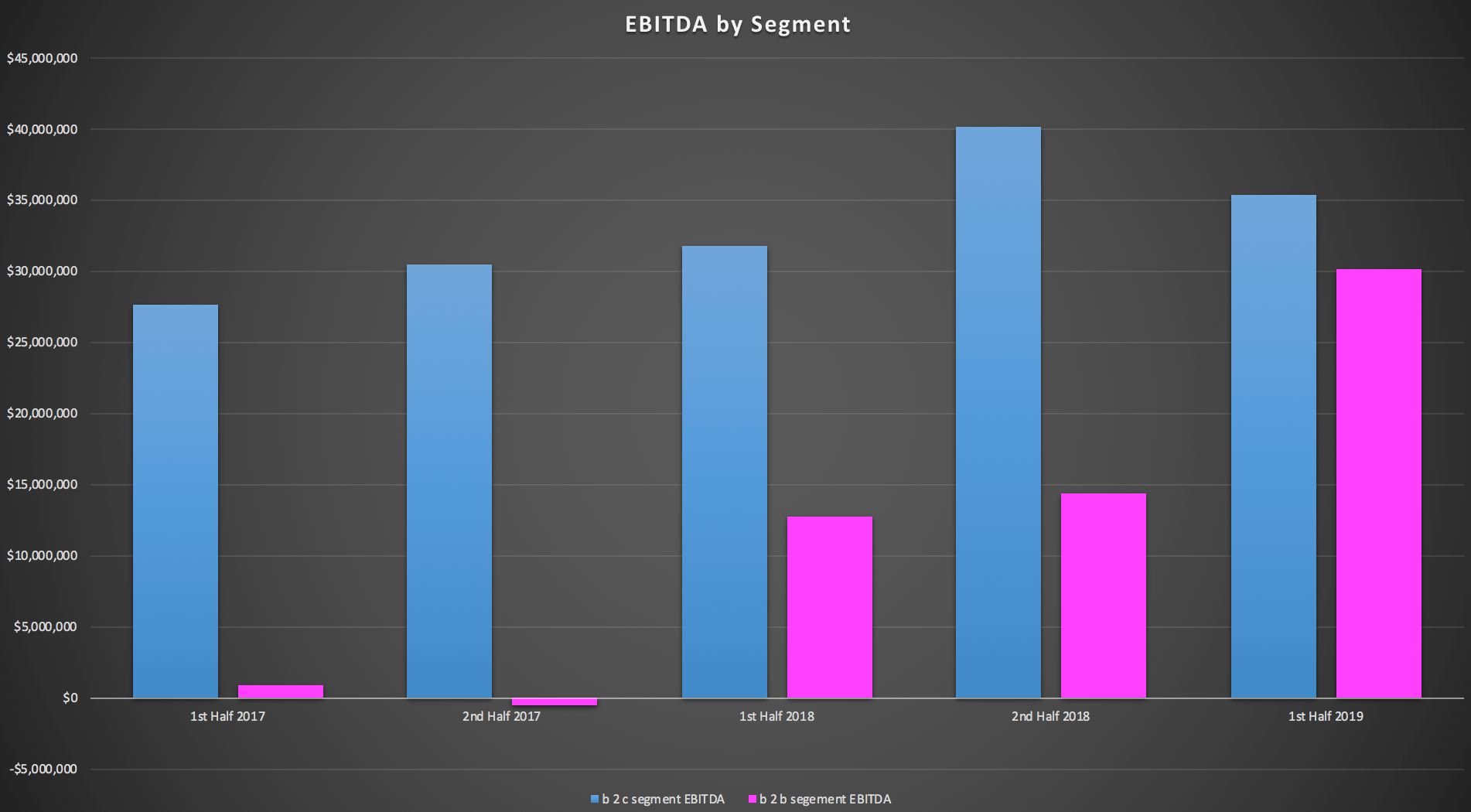 The main driver of growth is the B2B division, WebBeds, which was founded six years ago and now constitutes well over half of the company’s EBITDA on a pro forma basis. This business provides hotel inventory to travel agents and tour companies acquired directly from hotels and from other aggregators.

In order to achieve scale management has aggressively acquired competitors. This has greatly improved the choice of higher margin direct inventory which it can offer clients as well as assisting with geographic expansion. WebBeds is now the second largest player in a highly fragmented sector.

The slower growing B2C division consists of the Webjet online travel agent (OTA) and New Zealand based Online Republic. Webjet OTA recorded a good result with flight bookings growing 4.1% or three times the broader market. Online Republic saw a modest decline in bookings and TTV but an improvement in margins. Notably, EBITDA from the B2C segment was lower half on half, pointing to weak consumer spending. Here lies the risk in the cyclicality of the business. If Australia falls into recession, then EBITDA from the B2C segment will probably continue to decline.

As a result of the incremental revenue from Thomas Cook, a full-year contribution from DOTW and growth opportunities in Asia, the company is guiding at least a $40 million improvement in EBITDA in 2020. This is up from current 2019 guidance of $120 and after adjusting for capex and tax I estimate the stock is trading on a forward EV/NPAT of around 23.

Given guidance of further improving margins in the WebBeds business in the medium term and MD John Guscic’s confident statement in today’s conference call that there will still be plenty of growth potential in the B2B division in ten years time, the stock looks good value even after today’s rise.

The only thing that would hold me back from buying shares in Webjet today is where we are in the business cycle. Global economies are weakening with Italy in recession. Meanwhile, the outlook for the Australian economy continues to deteriorate with house prices sliding.

The B2B business is growing strongly enough that it would probably be relatively unaffected and so I can’t imagine earnings going backwards but there is still scope for disappointment in the next couple of years.

However, for those that are happy to ride the cycle I think that today’s price represents a decent long-term entry point.

A note from Claude:

My thesis for buying Webjet, as outlined in Episode 10 of the Three Wise Monkeys podcast, was that the B2B business had hit profitability and we were at an inflection point as operating leverage would take hold. This turned out to be absolutely correct and has driven a 30% share price rise today. However, the weak B2C results show that Webjet is not immune from macroeconomic factors, even as it continues to win market share. So I am no longer a buyer of Webjet shares. For now, I will continue to Hold.