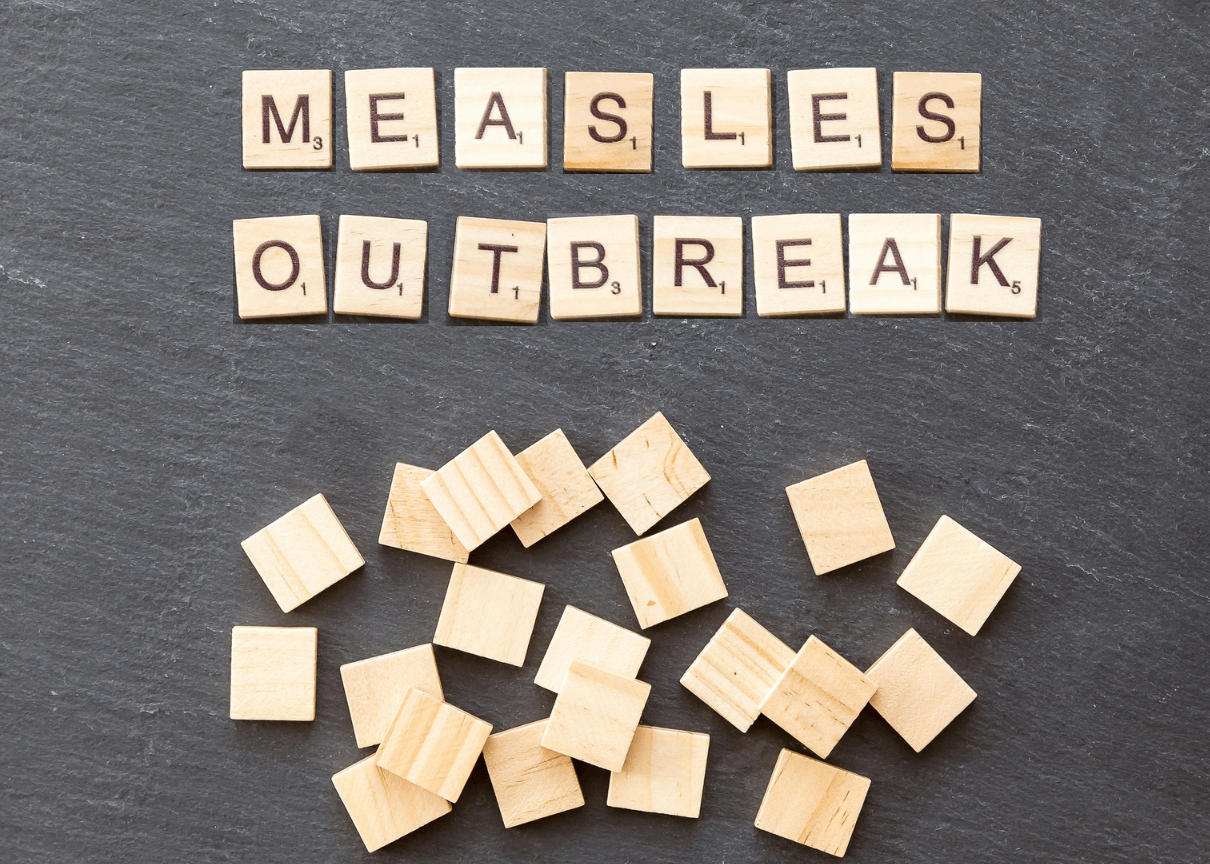 Does Oliver's Real Food Infect Minds With An Anti-Vax Message?

Update: As of March 2019, Jason Gunn has returned as CEO of Oliver's Real Food, after a 9 month hiatus. Since he is a major shareholder of the company, you can be sure that if you eat at an Oliver's restaurant, you are helping him. If you do not wish to support anti-vax in Australia, then you may wish to reconsider visiting Oliver's Real Food.

The investors who own shares in the company should be wondering what has gone wrong at Oliver's Real Foods (ASX:OLI). I doubt they are particularly pleased with the share price.

In my opinion the problem has to do with management.

The basic offering is fast, healthy food, sold at highway rest stops. While Australians (myself included) don’t mind a burger and chips, plenty of us prefer something leaner on occasion, so there are real prospects there. But it didn’t take long for me to discover that Oliver’s veneer of respectability obscured a dark secret: the founder and (recently removed) CEO, Jason Gunn, has a history of using the company to oppose vaccination.

Pro-science blogger Reasonable Hank examined the situation back in 2016. And multiple sources have confirmed to me he is unapologetic in his stance.

Now, in his 1977 Letter to shareholders Warren Buffett said:

“We select our marketable equity securities in much the same way we would evaluate a business for acquisition in its entirety. We want the business to be (1) one that we can understand, (2) with favorable long-term prospects, (3) operated by honest and competent people, and (4) available at a very attractive price.”

One might reasonably argue that Oliver’s Real Foods satisfies three of those four criteria. And there’s no doubt that judging honesty and competence is difficult. But when executive board member Jason Gunn has a history of posting anti-vaccination videos, it does not fill me with confidence. Personally, I believe that this aspect of the business should have been disclosed in the prospectus.

Because it is not just the former CEO who espoused anti-scientific views with regards to public health. It was, and is, the company itself that has spread this propaganda. You can see for yourself, below: 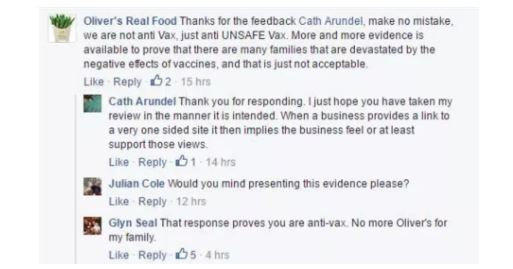 So the company, Oliver’s Real Food said “we are not anti Vax, just anti UNSAFE Vax”. OK then. The natural understanding is that the green bean company is better placed to judge the safety of vaccines than doctors and medical scientists. Who needs university when you have Facebook memes?

Here are two more examples  of the company using Facebook to spread anti-science propaganda, from Reasonable Hank. I presume these posts have since been deleted by the company (multiple investors, including me, have been in touch with Oliver's about the way it uses social media). 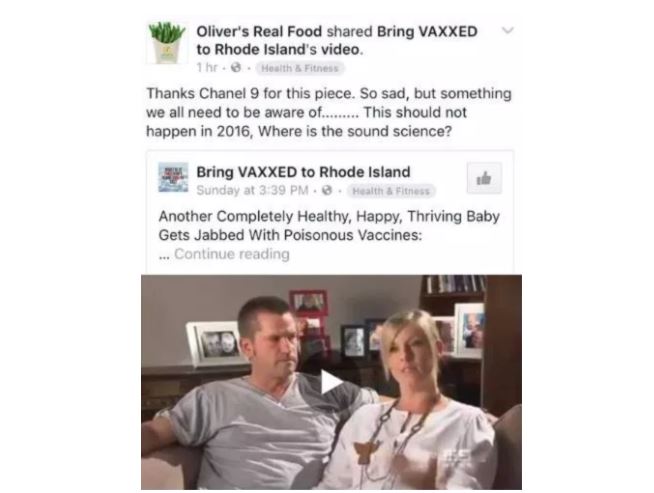 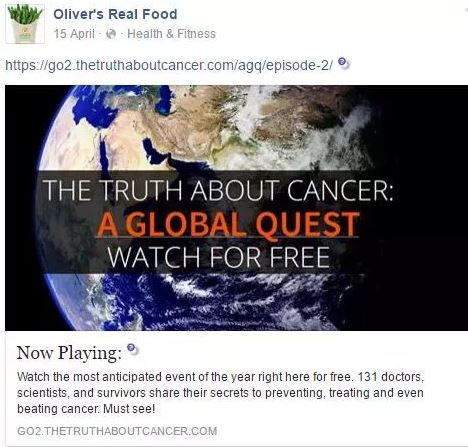 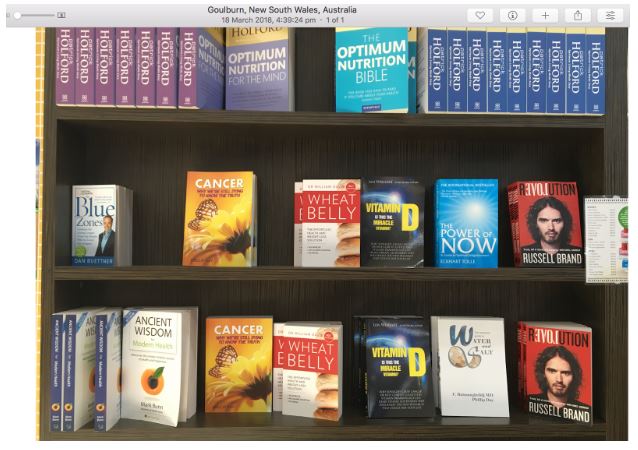 Let us examine an excerpt:

"Breast cancer serves as a poignant yardstick... Can we beat cancer? Yes. It's already done. The knowledge to conquer cancer was understood many decades ago but the facts never made it into the public domain until relatively recently.... and yet amazingly, the truth is still suppressed, lies disseminated, people hounded and jailed in order to protect a voracious and highly profitable corporate agenda."

Righto. So what is the cure for breast cancer, according to the books sold at Oliver’s Unvaccinated Foods?

Ahh yes, vitamin B17, a ‘metabolic treatment’ allegedly suppressed by med science academics and doctors alike. Part of the conspiracy of silence, to profit from selling pharmaceuticals and surgery.

Of course, this theory is not proven.

My first question is this: why is the founder of Oliver's allowed to use the store network, which is a shareholder asset, to spread this misinformation?

And my second question is: are directors fulfilling their fiduciary duties to shareholders by allowing shelf space to be used to display  niche, conspiracy theory books, rather than a more profitable use?

In my opinion Oliver’s has significantly underperformed its potential under the prior CEO. Under new CEO Gregory Madigan, I believe this company has potential to create value for shareholders by serving its customers nutritious meals. In my opinion spreading pseudoscience is unethical, a waste of shelf space in store, and undermines the company’s duty to shareholders, customers, and broader society.

Remember, newborn babies rely on us to vaccinate, in order to protect them from disease. Newborns do not have a sufficiently developed immune system to benefit from vaccines such as the whooping cough vaccine. As the selfish ideology of anti-vaccination spreads, so too will the suffering of our youngest and most vulnerable. Herd immunity helps prevent this:

In my opinion it would be a positive for Oliver’s if Jason Gunn resigned from the board. He is, after all, a man who appears to be either unwilling or unable to understand herd immunity. This company needs surgery, but it could emerge from the operating theatre much healthier.

Nothing on this website is advice, ever. The author does not own shares in Oliver's Real Foods (ASX:OLI). This post is for entertainment (and for my own reference!)

Excellent piece. I bought food at Olivers once. It came with ALKALINE water. The woman at the register said, 'it's just filtered water'. I looked at her and said, 'alkalised water means it has a different pH to regular tap water. Like, sea water or something.' (I'm not a chemist, OK?) I didn't drink the water. I got home and got out my basic gardening pH soil testing kit and tested a cup of tap water and a cup of the Oliver's alkalised water ... the colours were exactly the same - the middle-range neutral pH around 7.
So the alkalised water wasn't alkalised at all, which is straight up misleading.
Plus, if it really *was* alkalised to the point of seawater (let alone milk of magnesia or lye!) . . . well, it would go through you like a dose of salts, wouldn't it?

Update:
A few weeks after this post they sacked him