Disinfection specialist Nanosonics (ASX:NAN) has delivered an 11% drop in sales and a 60% decline in pre-tax profit for the full year ending June 30, 2018. That’s a big decline, but these headline numbers mask what’s really going on.

In the first half, Nanosonics sales were down 17%, a result that was attributed to a particularly strong prior period in which a major distributor undertook a large restocking. The previous corresponding half also benefited from a one-off tax benefit to the tune of $10m.

So it was always going to be tough besting 2017’s full year results. That challenge was made more difficult as distributors and customers delayed orders in anticipation of the Trophon 2 unit, which is being launched this month (earlier than originally anticipated). That left sales growth flat, half on half.

While I’m generally sceptical of excuses for lacklustre sales growth, this issue was flagged back in April when the company first received FDA approval for the second generation Trophon device. Very clearly, in fact.

Another factor is that an increasing number of units are being sold under a Managed Equipment Services (MES) or Rental basis. This greatly reduces the upfront revenue received, but is offset by much greater recurring consumables costs over the term of the agreement (it also lowers the barriers to purchase).

As for the much larger drop in profit, that’s explained by a significant ramp up in costs. For the full year, operating expenses were 15% higher, with the 4th quarter costs almost 44% higher than those expensed in the first. In the current year, management expects costs to come in at $53m, a further 24% jump on last year’s level. Around $13m of this is slated for R&D. 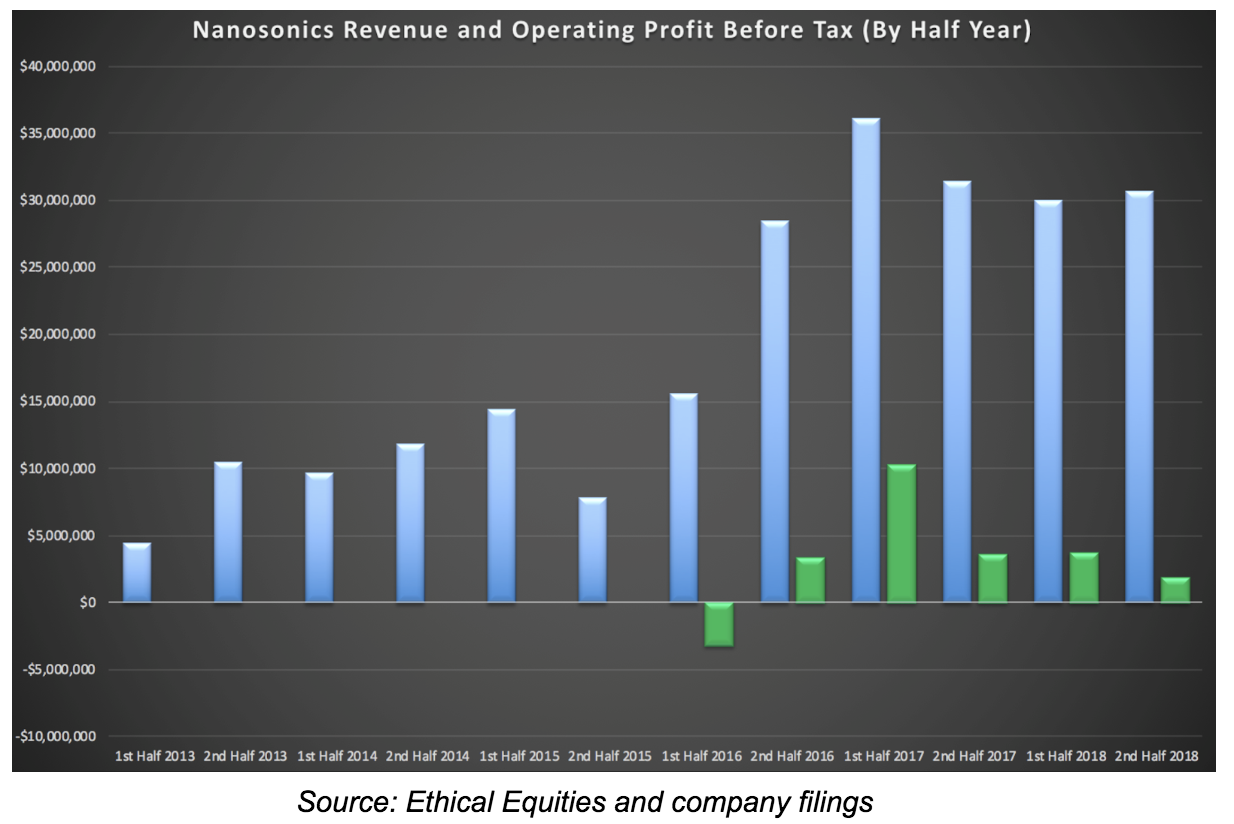 The rationale for the increased operating costs is that they are expanding their headcount to accelerate sales and product development, as well as funding the move into new regions -- a perfectly sensible thing to do as an investment in future growth, but one that doesn’t always work out. Plenty of fast growing hopefuls have misstepped with poor cost control (e.g. catapult).

Given the demonstrated efficacy of the Trophon product, it’s rapid adoption in leading markets, regulatory tailwinds and the advantages of being a first mover, this seems a justifiable move by Nanosonics. But it's something to watch.

What’s core to the bull case on Nanosonics is that the installed base of Trophon devices continues to grow at a sufficient rate. Each machine creates a very high margin recurring revenue stream (I estimate at least 75%) -- one that can be expected to last around five to seven years, with a high rate of retention at the end of the period.

To that end, we saw a 25% boost to the installed base, with a commensurate increase in revenues from consumables. There were 3580 new Trophons in use at the end of June 2018, 90% of which came from the US. That’s down on the 4030 adds in 2017 and the 3880 added the year before that (again explained by deferrals relating to Trophon 2). 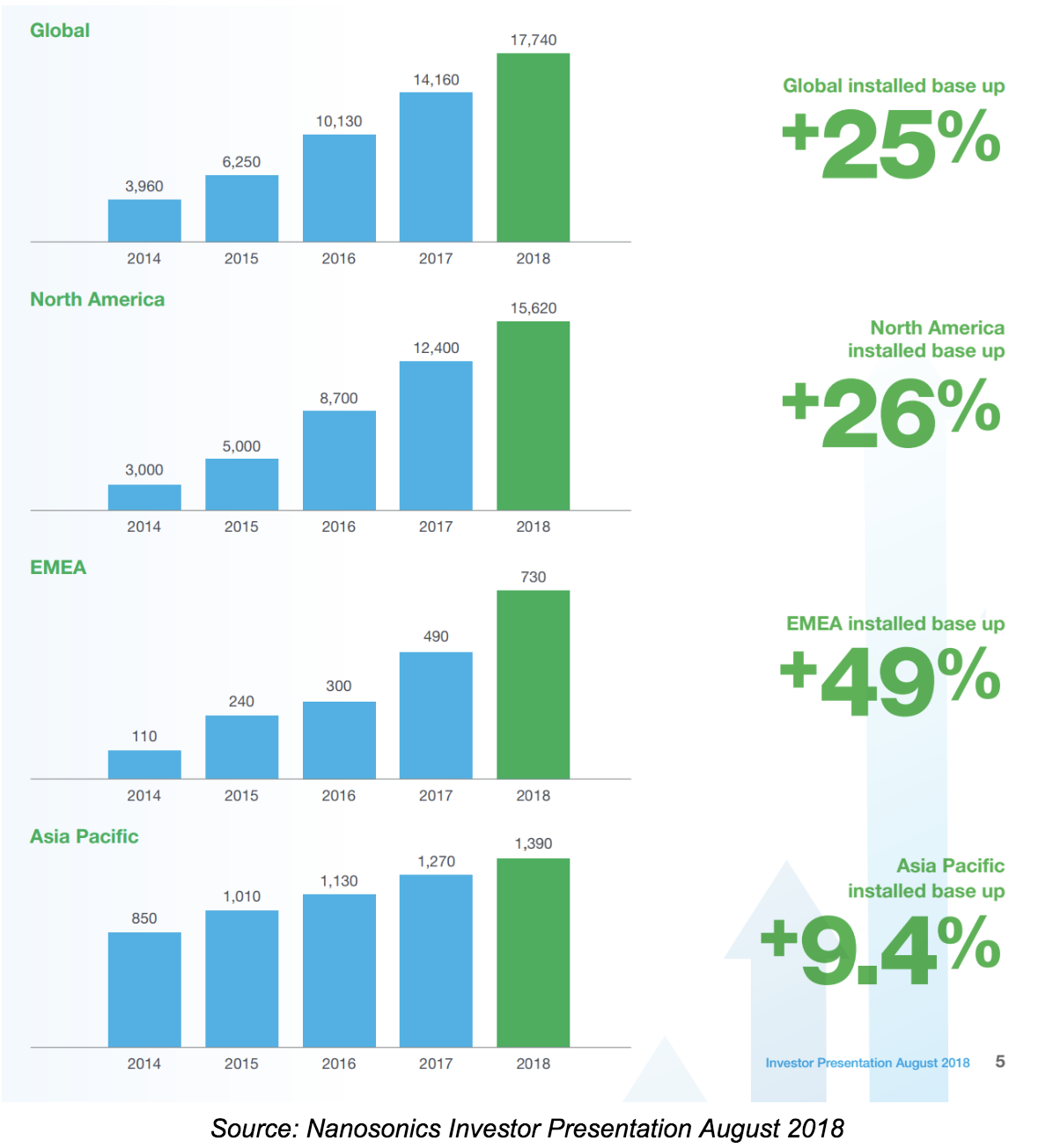 With expanded sales resources, new regions and plenty of runway ahead in existing markets, it's not hard to imagine the installed base to grow by at least 4,000 units per year for the next few years. That’ll be supported as the replacement cycle ramps up; at present around 20% of the fleet is five years or more old.

Nanosonics has previously said that each unit generates around $3000 in consumable sales per year. On the numbers provided in the latest results, that number now looks closer to $2200 (that’s a rough estimate; different sales models, a shifting maturity profile, and different regional pricing make it difficult to know exactly).

But as newer units ramp up and as the sales mix shifts towards MES and rental models, we can expect consumables sales per unit to rise. That’s especially true next year when the new agreement with GE kicks in -- one that will see a “material increase in both consumable sales and margin in North America as of and beyond July 2019”.

Altogether, Nanosonics could be churning out at least $75m per year in high margin recurring revenue by 2021. Likely another $30-40m or so in capital sales (when accounting for FX rates), and still with a lot of potential for expansion. That’s before you assume revenues for any new product releases (they are hoping to have one or two new products by the end of FY2020).

Importantly, Nanosonics remains debt free, is cash flow positive and has $69 million in cash. It seems extremely unlikely that they will need to raise capital to pursue their growth plans, and should get a high return on retained equity.

I’d go as far to say that the business is as close to recession proof as you can get, at least for the consumables sales. Moreover, it has very little exposure to the domestic economy. 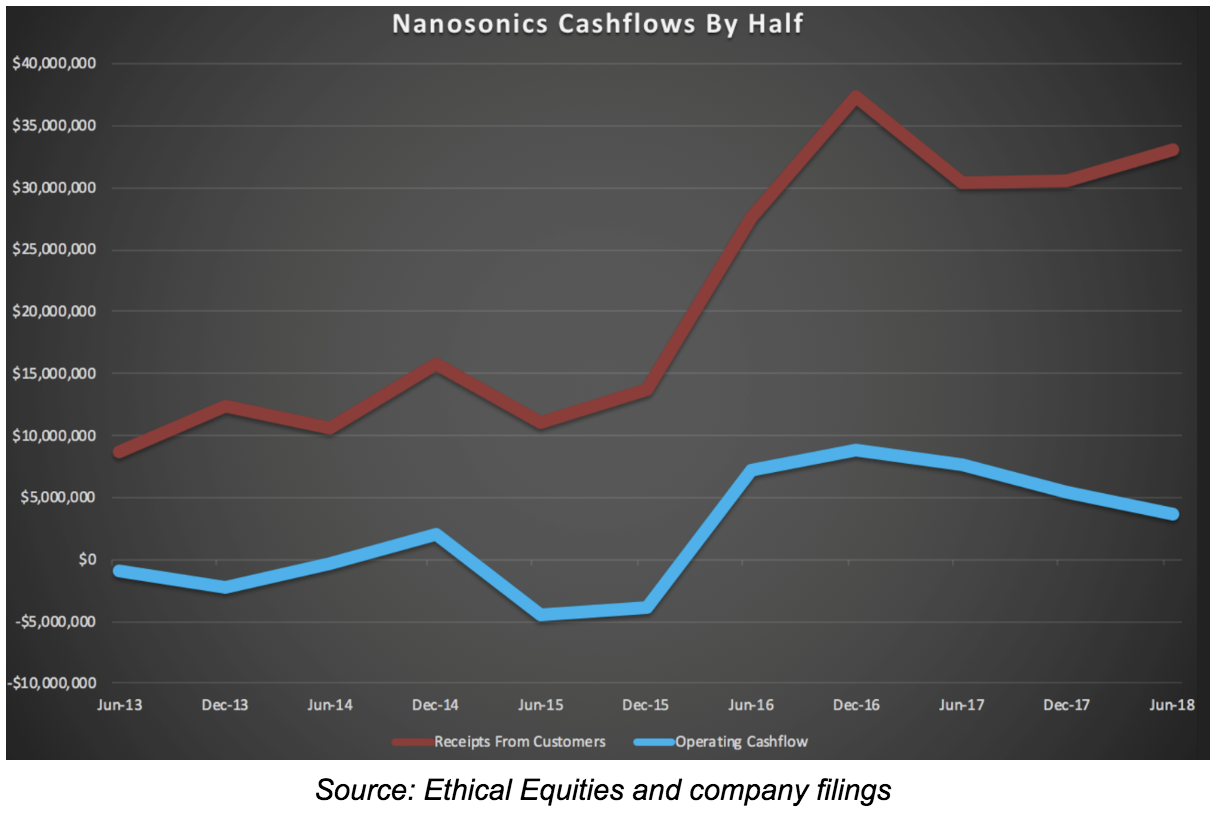 So I’m not too concerned at all by the latest results. In fact, the business’ prospects remain as attractive as ever.

That being said, adjusting both operating costs and unit economic assumptions have led me to lower my fair value estimate.

I reckon Nanosonics is worth around $2.80 per share (down from $3), though that could prove too conservative if sales growth accelerates (and visa versa!). Check out my forecast on Strawman.com for more.

Despite the very high quality nature of earnings and exciting growth potential, shares in Nanosonics are trading on more than 17 times sales. The PE is 183. Growth needs to be extremely strong to justify these multiples. And, if there are any speed bumps along the way -- as there often is -- we could see some pretty significant swings in market price.

I’ve learnt the hard way that you shouldn’t be too fussy on valuation when it comes to high quality businesses, and I’m very much in Nanosonics for the long term. So despite my view that shares are now above fair value, I’m not tempted to sell just yet.

We could easily see shares jump much higher in the short term given current market conditions (who knows?!). But I wouldn’t be tipping any new money into the business at these levels.

A patient investor will likely get a better buying opportunity in the future. If and when that occurs, and assuming the installed base continues to grow as expected, it’s an opportunity to be pursued with gusto.

I will not trade shares within 5 days of publication of this report.

A note from Claude: I’m very glad to have this fine coverage of Nanosonics from Andrew. I note he has made detailed forecasts available. While I may make slightly different assumptions around the numbers, I think his is a high quality and thoughtful analysis. Andrew bought Nanosonics well before I did, but we both bought more at around $2.50. Like Andrew, I am not buying at current prices. And like Andrew I plan to hold my shares at current prices. I will not trade shares in Nanosonics within 5 days of publication of this report.

Disclosure: Andrew Page and Claude Walker own shares in Nanosonics at the time of publication. This article contains general investment advice only (under AFSL 501223). Authorised by Claude Walker.