Clover Corporation (ASX: CLV) owns technology that allows them to turn fish oil into a power. Fish oil is a well-known source of Omega-3 which plays a crucial role in brain function. It is normally contained in breast milk and is included in baby formula, and that’s where Clover comes in. 67% of Sales are into Oceania, and that's where the growth is. The company has two divisions. One is responsible for product innovation, the other, Nu-Mega Ingredients, is responsible for commercializing the products. Note: See this edit regarding the ethics of this company.

R&D spending is likely to be higher in FY2014, and the company faces ongoing margin pressures. Sales will need to continue to grow over the next few years to maintain profits. However, management have been instrumental in drawing attention to this risk, and have not been idle. Gross margins remain well above 30%.

More than a decade ago the company patented several processes known as micro-encapsulation which coated the tuna oil with dairy proteins and thus prevented the oil from exposure to air and subsequent oxidation.  The stable product is a free-flowing powder and is known as Driphorm. A major customer is Nutricia, manufacturers of Karicare infant formula. Clover also supplies Heinz. In February the company announced the renewal, for 5 years, of a supply arrangement that was almost certainly with one of these two companies.

Board and Managment of Clover Corporation

The CEO and Managing Director, Dr Ian Brown has announced that he will retire in FY2014. Two of the board members are also directors of Washington H Soul Pattinson (ASX: SOL). WHSP was a very early shareholder, and continues to hold over 30% of the shares on issue. Board and Management pay has been reasonable and the company has been paying reasonable dividends since 2008. The Directors all have a reasonable number of shares. There are no major corporate governance concerns, other than the dominance of the board by WHSP.

Cashflow and Return on Investment

One of the most impressive things about this company is that despite having an abortive and loss-making joint venture, the overall return on capital investment over the last 10 years has been really strong. Since 2004, the company has generated about $1.35 for every $1 they spend on capital expenditure, and have grown operating cashflow from about $200,000 to $2.8 million in FY2013. However, this figure is misleading. From 2012 to 2013 payables decreased slightly while receivables grew by about $2 million and inventories grew by about $1.7 million. But for this, cashflow would have been $6.5 million. However, to be conservative, I've used $5.25 million as my expected cashflow in FY2014.

I haven't bought Clover shares. However, I'm pretty tempted at current prices. Using a 10% discount rate and 6% growth, I get a buy price of 47c - 50c. It seems likely that cashflow will be up and down in the future, as it has been in the past. However, the evidence suggests that the company will increase sales.

The main reasons I believe cashflow will grow are:
1. Strong demand for infant formula from China, and no obvious reason why customers would change supplier.
2. New product sales are expected in 2014 resulting from 2011 initiatives.
3. New product sales are expected in 2016/2017 from current initiatives (preterm clinical trial).

The main risks are:
1. Loss of a major customer.
2. Decreasing margins due to competition. 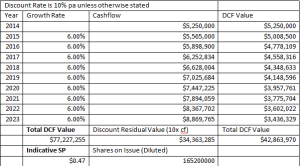 So, is Clover a buy? Comments are welcome!

Update regarding the Ethics of Clover Corporation

It's been pointed out to me that there may be a strong ethical argument against Clover Corporation. The concern is that in developing countries, there is relatively poor awareness that breast milk is better than baby formula. Indeed, the WHO recommends that babies are breastfed for at least 6 months. These articles, published in the South China Morning Post and The Wall Street Journal elucidate the problem.

I'm not sure how bad the damage is. It would certainly be a pity if someone fed their baby artificial formula because they thought it was better than breast milk. On the other hand, the information regarding the health advantages of breastfeeding is so easily accessible (at least on English-language websites) that I hadn't even considered the problem. Another issue is that Clover doesn't disclose enough information about its supply chain.

For now, I will continue to cover Clover Corporation for two reasons: a) It only provides an ingredient in baby formula; and b) I think that the primary reason people use baby formula is because work makes it too difficult to breastfeed.

Hypothesis: If people have the wrong idea about breastfeeding, then it is up to government and social networks to rectify that. As long as advertising is not perpetrating lies, it is not the responsibility of the baby formula companies to explain the benefits of breastfeeding to parents. Feedback welcome.

The Author has no financial interest in Clover Corporation. Nothing on this website is advice, ever. This post is for entertainment (and for my own reference!)

Sign up to the Free Newsletter to receive the best research, first.

CLV is one of those rare gems that has a stable real business underpinned by a prospect of shooting the lights out given its industry and product segment. It has admittedly been through some tough times, but has managed the process well, made realistic decisions and been a consistent investor pleaser in the process.

As a VC and private equity investor I hold this share as one of the few exceptions to the private investment mandate given its potential.

Thanks for your excellent cover on this one! I've been watching Clover for some time and finally opened a position today (48c).

48c is a reasonable price by my estimation. I've been in HK and the people here are very aware of Chinese demand for baby formula: at the airport there are announcements making it clear that there is a limit on how much you can export.

I too have followed Clover Corp for a while, and admire the management team. I realise that they invest in R &amp; D and develop new products continually, but I am not convinced they have an enduring competitive advantage to support their high Return on Equity. Any thoughts?

The main reason I don't own shares in Clover is that I'm worried about their falling gross margin. In other words, I agree with you (although I do think it's a reasonable investment below 50c).

Pretty Glad I didn't buy shares. Here's an excerpt from an email I wrote my friend on March 5:

"I've just been reviewing the Clover situation, and thought I would let you know that I would probably sell my shares if I had any.

I think the FY 2014 results will be hit hard by the recall. I had expected a hit to the first half result but the Chairman said 20 - 30% drop in sales for the full year. Because of operating leverage, that could really smash profits.

While that would be temporary, and the long-term picture looks reasonable, I have a feeling that the market will punish the company anyway."

Am currently reviewing the results.

What are your thought on CLV at this level. Any reason cited for why the CEO is leaving.

I'd be really interested to hear your view on the half yea results :). I wasn't really convinced by the clover results presentation that they had a plan of action to fix sales decline. I had read that in several papers, china was playing with regulations to move some sales to domestic baby formula producers also....

Cheers, and interesting write up

Just as a ponder point of comparison, fonterras sales are already up on the prior year.......and they were the contaminant.........

Terrible results from Clover. Fonterra milk false alarm was a hit it could scarcely afford. Ongoing pressure from margins and it's clear this is a commdity-style play.