When we last checked in on ReadCloud (ASX: RCL) in early September the company had just reported its maiden full year results as a listed entity – having raised $5.5M (post IPO costs) at 20c per share in February.

After touching the vertiginous heights of 62c in mid-August, the shares were down to 47c at the time the FY18 results were released to market, and recently bottomed (he said, optimistically) at 29c. The shares strengthened to 36c ahead of the AGM and closed at this level on Friday. ReadCloud has certainly helped remind shareholders of the volatility prevalent in the small cap sector – which can be magnified by illiquidity, and RCL is a comparatively illiquid stock.

Since the release of the FY18 results, the company has appointed a CFO and also signed a direct distribution agreement with global major publisher Oxford University Press (OUP) for its digital content. ReadCloud had been hosting and distributing OUP content indirectly through RCL resellers (presumably at lower margin than it will be able to generate on OUP content going forward).

We noted in our last RCL piece the 3 tranches of performance rights available to management which were vestable  in halves based on a mix of 2018 and 2019 user, revenue and EBITDA targets; and a 4th tranche based on share price hurdles. Following the achievement of (1) both share price triggers; (2) the achievement of the first of the user targets; and (3) one of the two FY18 financial targets, a large chunk of these performance rights vested and management’s stake in the company increased by around 3%. The FY18 EBITDA hurdle was missed by a mile – as telegraphed in April – not helped by the unexplained large increase in Cost of Sales for FY18.

Business momentum and trying to understand the cashflow profile

As we iterated last time the success or otherwise of a potentially high growth small company like RCL would come down to execution. When FY19 started, the general vibe was that momentum was starting to increase.

What no doubt helped power ReadCloud shares to their August high was the June quarterly cashflow statement released at the end of July, which bullishly disclosed that the company’s sales pipeline ahead of the CY2019 school year was 6 times the size of the CY2018 pipeline 12 months earlier. Conversion of this pipeline would therefore be key. [No sh!t, Gent]

The September quarterly 4C seemed to indicate things were on track, with the company advising that several new large direct schools had been signed, and that via reseller OfficeMax a further several indirect schools had been locked in for the 2019 school year. That seemed like a good start when you consider that 70 schools had been secured by June. ReadCloud then teased OfficeMax’s appointment to a 2-supplier panel for the Catholic Archdiocese in Sydney, which could result in up to a further 38 secondary schools (an OfficeMax-vs- other-panel-member purchasing decision) – though not until the 2020 school year. The company also flagged new reseller agreements executed during the September quarter with 3 new “stationary” (sic)] / book suppliers – which increased the total number of resellers to 7 including OUP above. Better learn how to spell “stationery”, fellas.

Finally, ReadCloud disclosed the signing of a distribution agreement with the Australian Institute of Education & Training (AIET) – a provider of 34 different Vocational Education and Training (VET) courses to approximately 4,000 Year 11 and Year 12 students in more than 90 secondary schools in Victoria, SA and WA. No more acronyms, I promise (NMAIP).

So far, so good, although a little vague and lacking in hard numbers or targets – perhaps not surprising given (a) the lack of detail provided by the company in its short listed life to date, and (b) the low base from which the company grew through FY18.

Cash at September was $3.7M, down from $4.6M at June – reflecting the seasonality profile telegraphed by management: December and March quarters are seasonally the strongest cashflow-wise as schools purchase their school year curricula during these quarters. Readers will remember that cash raised from the IPO in February was $5.5M (so, cash declined by a third in 7 months), and close watchers of the company’s ASX announcements will have noted the increased investment in the ReadCloud platform, and also the increase in MD and CIO salaries for the FY19 year (to $250K, not exactly multi-million ASX Top 50 company salaries to be fair).

And this may well explain some of the share price action over the past few months – fear of a potential capital raising. Without much in the way of revenue or earnings guidance for the current financial year (again, not unusual for a microcap), my eyebrows were certainly twitching at this point. Quarterly cash-burn is outlined below, including the December forecast outflows (only; companies rarely think to provide forecast cash inflows) from the September 4C: 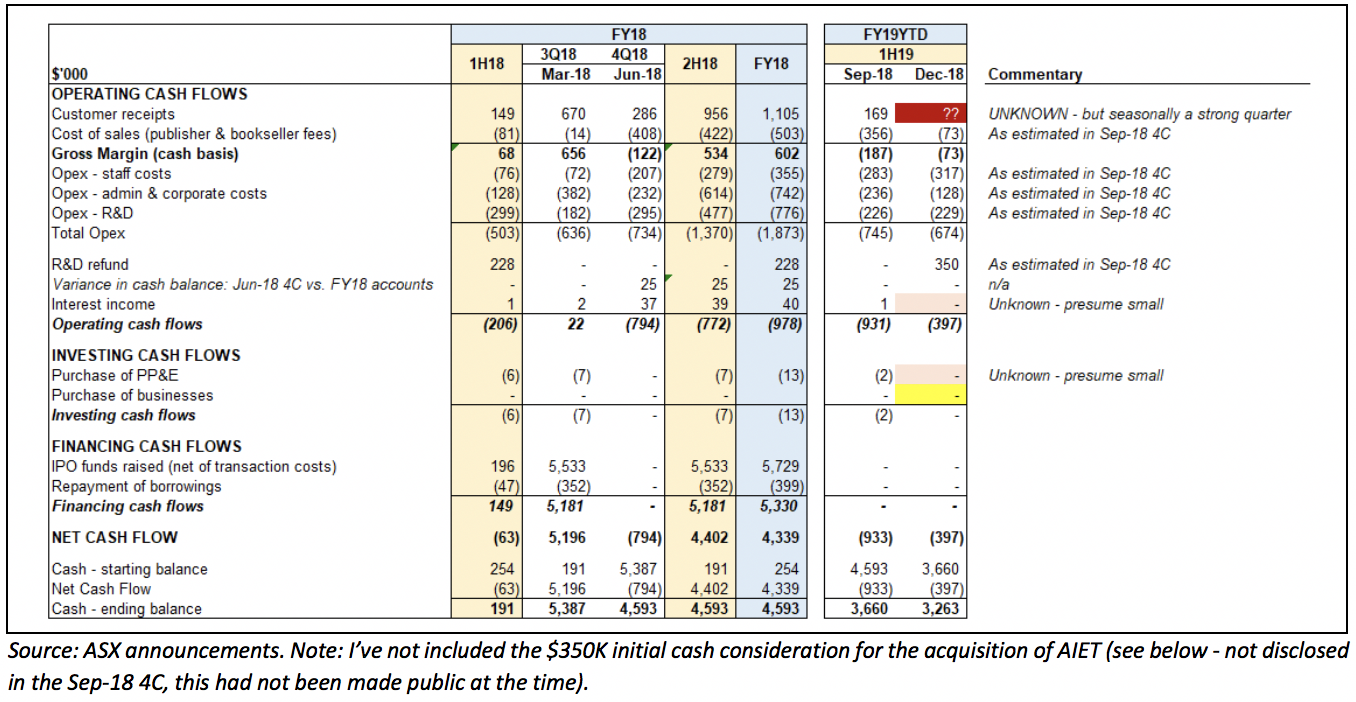 Note the regular disconnect above between Cost of Sales payments (to publishers for content and potentially also to resellers for indirect sales to schools (depending on payment terms)) – this suggests annual / other irregularly timed payments which don’t align with the company’s incoming cash receipts – which don’t make our attempts to forecast the cashflow cycle any easier.

Using management’s estimated R&D refund (which will likely have hard calculations behind it given the company’s track record of achieving R&D refunds historically (which requires the preparation of tax returns and providing supporting information)), and assuming management’s forecast Dec-18 outflows are near the mark, net cash burn if RCL received zero customer receipts for Dec-18 would be just $0.4M. This is obviously extremely unlikely given the known cashflow seasonality profile, and bearing in mind the increased number of schools and resellers over the past several months. December *should* be the best or second best cashflow quarter (RCL hasn’t been listed long enough for outsiders like us to have a definitive handle on this). If anything, the ~$0.7M of customer receipts from the March quarter should be below the mark.

Note that Sep-18 quarterly receipts were higher than that for 1H18 – which gives a sense of the trajectory here. Also note that the FY19 financial hurdles for management’s remaining performance rights are $7.5M of revenue and $2.0M of EBITDA – this is of course no guarantee that the company will get near these targets, but the investment in the sales team in 4QFY18 and the big news below suggest they intend to give it a good old crack. So, based on the above and communicated trajectory – unless sales pipeline conversion is very poor – a capital raising *should not* be required.

But just when you thought you were starting to get a handle on the potential cashflow profile of the business over the next several months, in mid-November ReadCloud announced two materially price sensitive pieces of information:

ReadCloud company disclosed that AIET achieved revenue of ~$1M for FY18 with further growth expected in FY19, and announced that the total potential acquisition cost for AIET (up to ~$3M) was a 4.5x EBIT multiple – suggesting AIET’s forecast EBIT for FY19 is ~$650K. AIET would have to go backwards in FY19 for its vendors to not achieve the full benefit of both earn-outs above. All of a sudden management’s final tranches of performance rights are looking more achievable.

Prima facie, the acquisition of AIET looks like a sound strategic move, providing a complementary product which is sold in ReadCloud’s existing secondary school market. ReadCloud also noted that:

The delay in purchasing decisions for RCL’s school textbook content seemed problematic, but the company iterated that this logistically just extended the selling season by 4 weeks – which sounds reasonable given the schools will still need their digital content, however we won’t definitively be able to confirm that this is a non-issue until early next year.

There are obviously a number of moving parts here. ReadCloud started FY19 with 70 schools and had signed what sounds like a further dozen schools during the September quarter. Add in AIET’s 90 schools and the company would need to sign a further ~30 during the current and last 2 quarters of FY19 to hit the new target of 200 disclosed in the AGM presentation.

The AGM presentation disclaimed that “management is not in a position to provide financial guidance at this point in time” as the company won’t have a meaningful grasp of CY2019 direct and indirect (via reseller) school year sales until January. This is unsurprising given the delayed school purchasing decisions communicated and the AIET acquisition completed last week. Does this mean that ReadCloud will start providing hard financial guidance in the future?

I hope that the release of the company’s December quarter 4C in late January will provide commentary to help shareholders:

(1) understand how the CY2019 school year is shaping up (bearing in mind that sales will probably still being made into February) and the extent (if any) of the impact on sales of the school curriculum changes;

(2) confirm that there are no cashflow concerns or imminent need for more capital; and

(3) see the first financial contribution from AIET (recognising this is likely to be small given the acquisition was only completed in late November). Put it in your diary: that December 4C release in late January could be materially price sensitive – hopefully to the upside for RCL shareholders like myself.

And now, dear readers, here we are back where we were in May – share price-wise. But now we arguably have more reason for optimism,  given the expected uplift in revenue and earnings from the AIET acquisition, as well as the suggested stronger momentum in school textbook volumes in FY19 vs FY18. That optimism will have to suffice for the next couple of months in the likely absence of any further new information. I am optimistic  but I am keenly awaiting the next reporting milestones for confirmation (or otherwise) that my investment thesis for the company is still intact.

Disclosure: I (@Fabregasto ) own shares in ReadCloud and may buy more shares in the future – but not for at least 2 days after the publication of this article.

Claude Walker also owns shares in Readcloud, and will not trade for at least 2 days after the publication of this article.

This article contains general investment advice only (under AFSL 501223). Authorised by Claude Walker.

Interesting how opaque their financial reporting is. Small companies selling one product really shouldn't be that hard to provide guidance for.