ReadCloud (ASX: RCL) released its 4C (quarterly cashflow statement) for the March quarter earlier this week. The 4C didn’t contain much that hadn’t already been telegraphed in the previous quarter’s 4C and the 1H19 results, but did include the company’s expectations for cash outflows in the current June quarter, as well as some vague guidance on customer receipts. The table below presents RCL’s quarterly cashflows since listing early last year: 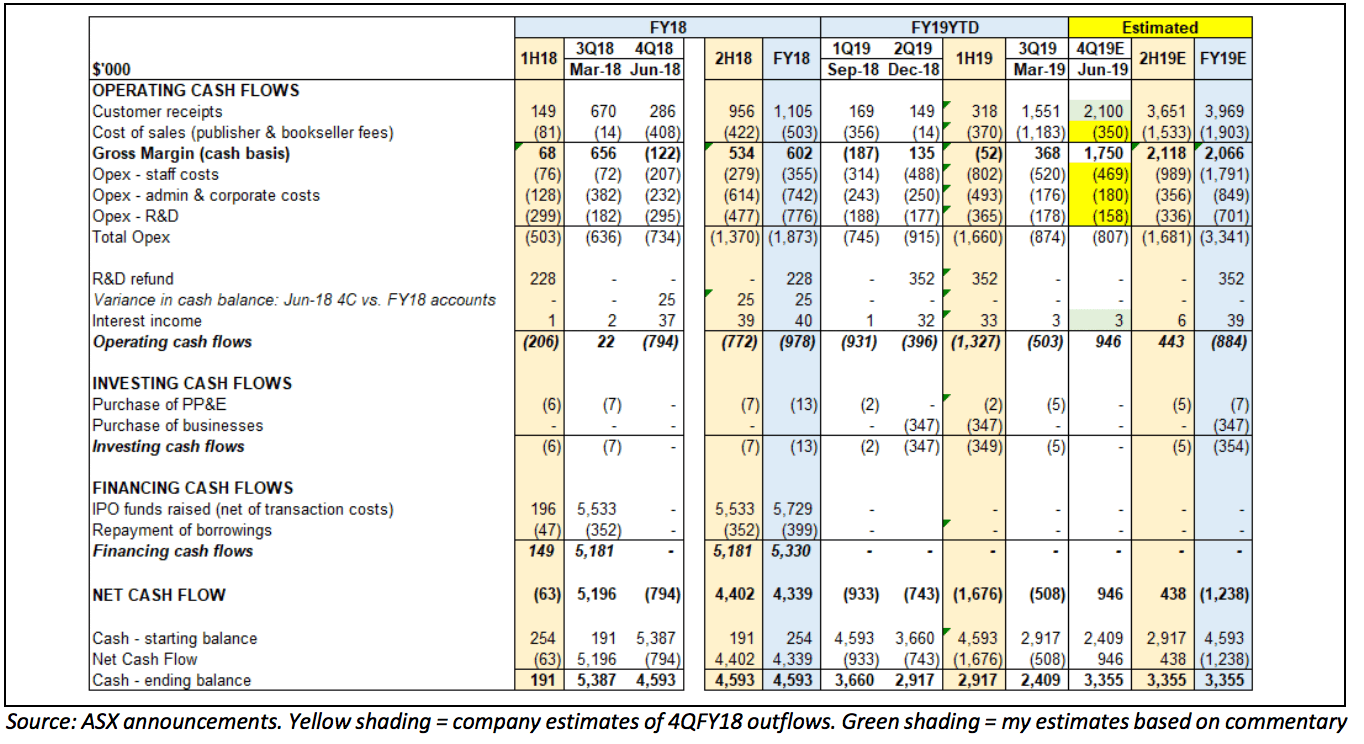 As can be seen above, the company’s cash balance declined $0.5M in the March quarter to $2.4M. However this was driven by seasonally higher payments to publishers and booksellers which had already been flagged in the December 2018 4C (and were broadly in line with estimates). These payments are expected to be 70% lower in the June quarter.

Of note, the company flagged that June quarter customer receipts are “expected to exceed the March quarter”. Assuming this holds true, the company would generate a minimum positive net cash flow of $0.4M for the current quarter (based on ~$1.6M of customer receipts). However, I expect a significant increase in customer receipts for the June quarter – based on 1H19 achieved revenue of $2.3M and management’s forecast of higher revenue for 2H19 (vs 1H19, reiterated in the new quarterly update) – suggesting a range of $4.5M to $5.0M for full year FY19, and incorporating known seasonality in receipts:

In the table above I have included $2.1M of customer receipts as a placeholder for 4Q19 – which would take full year receipts to around $4M. Given that the vast majority of sales are invoiced in the 2nd & 3rd quarters (received respectively in the 3rd and 4th quarters), I wouldn’t expect much straddling of receipts between financial years, and I believe that full year receipts should be broadly in line with full year revenue – suggesting there is upside to my $2.1M estimated receipts above.

The combination of RCL’s outflow forecasts and my receipts assumption above yields a year end cash balance of around $3.4M. This *potentially* looks sufficient to fund operations through the seasonally slower December half of the year (before 2020 school year receipts start flowing into the coffers) – based on a $0.9M opex quarterly run-rate and the seasonally lower publisher/bookseller fees. This would not however leave much in the kitty for increased investment in sales & marketing ahead of the 2020 selling season (which would not surprise me and is arguably justified by the substantial increase in revenue and key metrics in FY19 vs FY18 (discussed below)).

The investor roadshow – flagged at the release of the company’s 1H19 results at the end of February (then, for March) and also in the Operational Update released in early April (for April) – has not yet materialised. Shortly after on Twitter (follow me here for an endless stream of vaguely intelligible nonsense), I placed the odds of a capital raising at 50/50 – and while the expected positive operating cash flow for the current quarter arguably lessens the need, I believe there is still a reasonable chance (30/70 or 40/60) of a fundraise to provide a bit of buffer and more fuel for growth in FY20 and beyond. This is a natural follow-on to an investor roadshow (should that still happen) and it may be that any capital raising takes the form of a placement (i.e. to small-cap fund managers, noting that Thorney is already on the register with 12%) – though that may be naïve/wishful thinking on my part.

The March quarter 4C also included updated customer and operational metrics (summarised below) – with a further 21 schools added since the end of February (mainly by AIET). In total, RCL has increased its school customers by 60% since June 2018 (including AIET in that base) – with a 115% increase in higher margin direct schools, a 48% increase in resellers, and a 54% increase in VET schools since the AIET acquisition was completed in November. Prima facie, this is some pretty impressive growth across all parts of the business.

This is a strong platform from which to enter FY20, with further growth likely from a combination of recent developments, continuing strong momentum and operational improvements:

While shareholders should expect recent rapid growth to decelerate in the near future, I am expecting that another meaningful (i.e. 50%+) increase in revenue for FY20 would see the company reach its cashflow and NPAT breakeven inflection points based on the inherent scalability of the business. As I opined in our last RCL piece, I would personally also like to see some further visibility on key metrics, such as breakdown of revenues between RCL/AIET, Resellers/Direct schools for the core ReadCloud platform, as well as other measurable such as average revenue per school or by student.

We caution that RCL is still a relatively risky investment at this early stage of the company’s life cycle – but note that historical losses have been modest and its market cap is “only” $28M – not at all exorbitant for a fast growing education/encryption software business which is nearing its profit inflection point. FY20 is going to be a pivotal year for the company and I personally remain cautiously optimistic – as such I will continue to hold my position (and may add, subject to the disclaimer below).

We will update readers further in August at the release of ReadCloud’s full year FY19 results – though may report on the June quarter 4C statement should that provide any useful insights on the investment thesis for the company.

Disclosure: I (@Fabregasto ) own shares in ReadCloud and may buy more shares in the future – but not for at least 2 days after the publication of this article. Claude Walker owns shares in Readcloud and will not trade them for at least two days after the publication of this article. This article does not take into account your individual circumstances and contains general investment advice only (under AFSL 501223). Authorised by Claude Walker.