Radiology software company Pro Medicus (ASX:PME) today announced its results for the 1st half of FY 2019.

Over the years I have tracked net profit before tax excluding currency impacts. By that measure, Pro Medicus achieved a half year profit of $8.8 million. However, management have invited us to also look through the impact of the new accounting standard AASB 15. This results in an underlying profit of $9.2 million, an increase of 80% on the prior corresponding period.

You can see how underlying profit has progressed in the chart below (note, it is not adjusted for minor restatements). 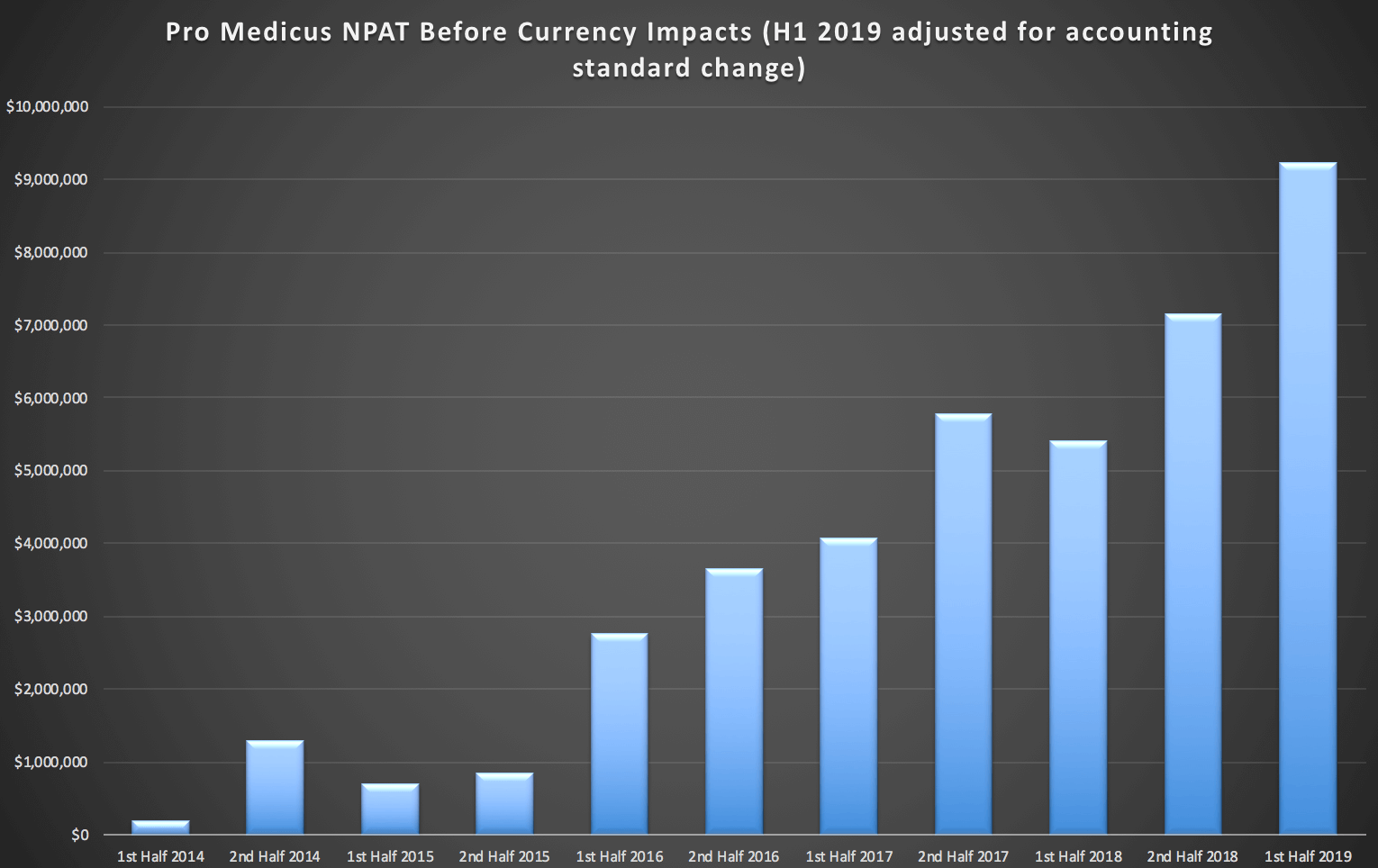 Importantly, the 80% growth rate versus the prior period benefitted from a $3 million capital sale to a German hospital, while the prior period was notably bereft of a large capital sale. On top of that the CEO said that “The last half was a big half for implementations.” These capital sales make revenue and (to a greater extent) profit rather lumpy at times, and help explain why this half may be hard to match, next half.

However, growth in the US should be smoother as most contracts there are pay-per-view and so the revenue is spread evenly over time. As you can see in the chart below, US revenues were up about 10% half on half, and 38% versus the prior corresponding period. That’s a reasonable result, but not as fantastic as the 80% increase.

Closer to home, the Australian business had another good half, with revenue up on the prior corresponding period but down on the preceding half, presumably due to less implementation revenue.

Looking to cashflow, operating cashflow was flat due in part to a payment of $4.1 million that was received just after period end. The CEO said: "of the $8.6m increase in debtors [receivables], $4.1m relates to a payment we expected before the end of the half which arrived in the first week of January.."

If the company had received that payment during the half, then operating cashflow would have roughly matched profit. We can expect receivables to moderate slightly when measured against revenue, during the second half, according to management’s commentary.

Of course, receivables will continue to grow with the business. Free cash flow was very weak for the reasons mentioned above, coming in at $2.6 million. I expect a rebound in the next half.

Importantly, expenditure on software development increased faster than usual, by more than 10% half on half, to $3.6 million. I have generally been a fan of the slow growth in R&D as sometimes companies go overboard with R&D, which reduces the return on investment received.

However, it is very important that the company allows the software developers to enjoy the fruits of their labour by a) paying them well (which it appears they do) b) making them shareholders (which they already do, via the employee incentive scheme) and c) allowing them growth opportunities (which means expanding the team, carefully). The accounts are consistent with this, as are qualitative factors such as the existence of employee satisfaction as a management KPI for short term incentives.

The company has brought forward a fully franked dividend payment by increasing the interim payment to 6 cents per share. This is only interesting because it suggests management are mindful of shareholders. Let me explain:

This move does not cost the company anything, given it has $24.7 million in the bank. Meanwhile  franking credits are worth more to some shareholders now than they will be if the next government reforms tax law to prevent non taxpayers from receiving a refund for franking credits (specifically, these people are mostly elderly people who do not pay tax and expect taxpayers to enrich them further through the rebate of franking credits).

The fact that the company has done something to mitigate this potential shareholder concern, however mundane it may be, reflects well on the board.

This was a particularly good half, with underlying profit coming in above my expectations. It may be difficult for the company to beat this result in the second half, or even in the first half next year, particularly because implementation revenues will now be spread over the course of a contract due to the accounting change mentioned above. The effect of this is to make capital sales the main source of revenue lumpiness.

The company has said they have “a positive view of the next 18 to 24 months,” which is just about the extent of what any good company should give by way of guidance. More importantly, the CEO said that “we’ve had the largest number of new RFP’s [requests for proposals] hit our desk in the most recent half”, so the sales pipeline remains strong. Furthermore, the company thinks they can maintain or improve margins. That’s great.

I think that it is reasonably likely that better buying opportunities will emerge, given that this half benefitted from a fairly lumpy capital sale in Germany. You can see in the chart above that the impact of a capital sale actually caused half year profit to decline from the second half of FY 2017 to the first half of FY 2018. Today’s buyers should have their eyes open to the potential that this half’s high water market is not surpassed next half. I don't know if that possibility is priced in, given the share price is up some 60% since we covered the company favourably in August.

But gazing further into the future Pro Medicus remains the rarest of ASX companies. It is majority owned by its founders who still lead the business. It is has a best in class product that is fast becoming the gold standard, worldwide. And most importantly, its management appears to achieve high levels of honesty and competence. It would appear they treat shareholders as partners in the business. Pro Medicus remains my biggest holding by far, and I am pleased with this report.

The Author of this piece, Claude Walker, owns shares in Pro Medicus and will not trade the stock for at least two days after publication of this article. This article contains general investment advice only (under AFSL 501223). Authorised by Claude Walker.