Vale Mike King -- I wish you lived to see this 10-bagger (for you). So many spiffy pops for you my friend.

Nearmap Ltd (ASX:NEA) released its results for FY 2018 last week and reported an increase in both revenue and losses.

Revenue rose 32% to $54.1 million with annualised contract value (ACV) up 41% to $66.2 million. ACV can be thought of as the revenue run-rate at year end and the fact that it grew faster than revenue bodes well for the future. This growth was driven by a combination of more subscriptions, which increased 13% to 8,863, and a boost to the average revenue per subscription (ARPS), which increased 25% to $7,473. It seems to me that the business is in its infancy given it has an estimated less than 1% share of the expanding global aerial imaging market.

The other side of the ledger looks less appealing. Rising costs meant that net loss after tax more than doubled from $5.3 million to $11.0 million and loss per share deteriorated from 1.4 cents to 2.8 cents. Cash from operations swung from a cash inflow of $3.7 million to a cash outflow of $2.7 million, while free cash outflow increased 89.8% to $12.2 million. The company remains debt free but its cash balance shrank from $28.3 million to $17.5 million during the year.

As a shareholder in Nearmap I am comfortable with the terrible set of numbers in the previous paragraph. This is because the vast majority of the expenditure represents investment in growing what (I believe) is a very high quality business. Nearmap has low incremental cost of sales, 100% recurring revenue and sticky customers. These economics are reflected in the financials of the more mature Australian operation which generated $26.7 million of cash in 2018 and heavily subsidises the US operations, which burned through $22.7 million. An additional $14.8 million was spent on corporate costs and group investments.

Generally speaking, cost of sales for Nearmap consists of the cost of taking aerial images several times a year, stitching them together, storing them and maintaining an online platform where customers login to view them. Pure software businesses often have both fewer and lower direct costs than this, but are similar to Nearmap in that the incremental direct cost per sale is very low. Furthermore, Nearmap’s high capture costs may actually work to its advantage in that they provide a barrier to entry for would-be competitors.

The value of subscription businesses is dependent upon customer retention and in this regard Nearmap scores highly. A particular highlight of the 2018 results was the reduction in churn, which is calculated as a percentage of revenue, from 10.2% to 7.5%. This alone increased portfolio lifetime value (LTV), which is ACV multiplied by gross margin % divided by churn, by 37%. Of course, churn will fluctuate over time and so LTV is inherently unstable.

LTV does not account for indirect costs -- but it is a useful proxy for tracking value creation over time, in my opinion.

Another cause for optimism is that the company’s heavy investment into the US, over recent years, appears to be bearing fruit. ACV more than doubled rising from US$5.3 million to US$12.9 million during the year and as can be seen above, the region is tracking ahead of Australia at the same stage in its life. 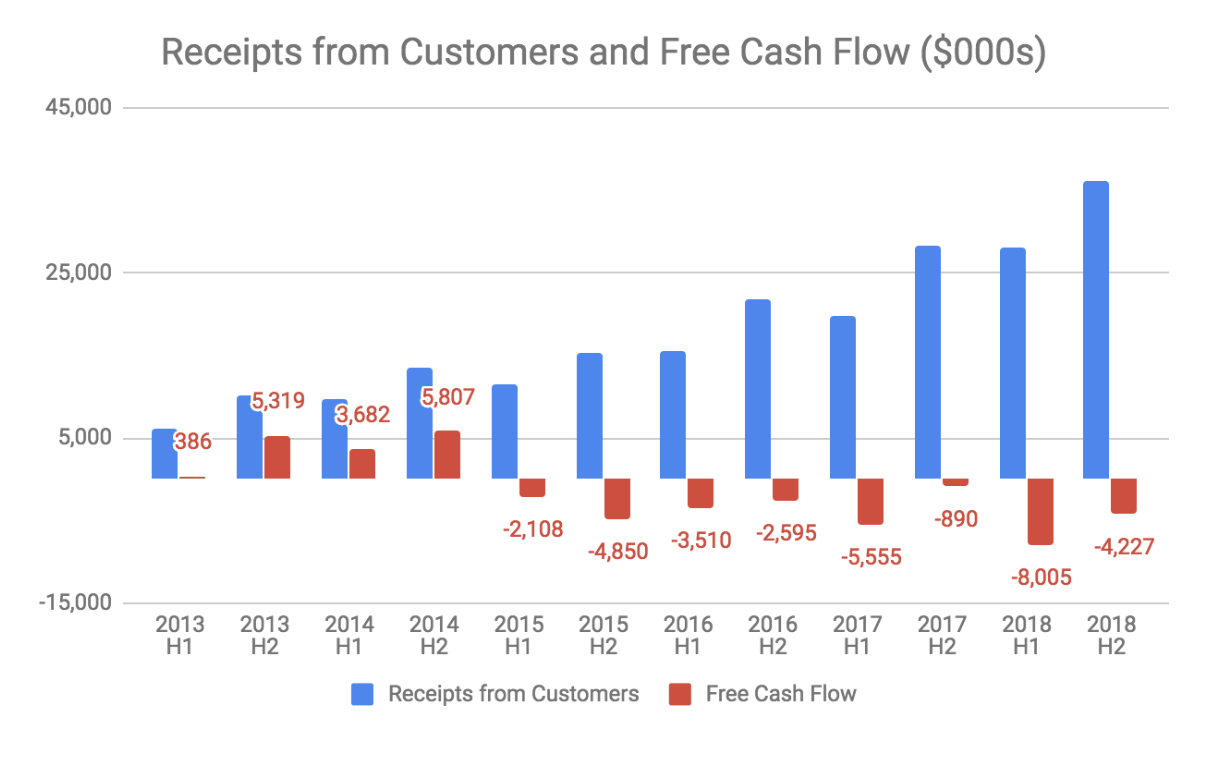 There are two key things of note in the chart above. Firstly, since entering the US market in the first half of 2015, the company has consistently spent more cash than it has generated. Secondly, there is a seasonal pattern to cash receipts, with the first half being weaker than the second half.

Management commented several times that operating cash flow for the second half of the year improved compared to the first half. Given the seasonality this is is misleading and does not necessarily imply an improvement in performance. The prior corresponding period (2017 H2) is a better comparator, and both operating and free cash flows worsened on this basis. However, they also said that the company is expecting to achieve cash flow breakeven in 2019.

The sales team contribution ratio (STCR), which is the ratio of incremental ACV to sales and marketing costs, increased from 90% to 114% in 2018. This metric is useful because each dollar of ACV has an expected life of more ten years based on current churn rates. The improvement for the year suggests that Nearmap may be realising scale benefits from its sales and marketing function.

Nearmap has recently added Oblique and Panorama imagery to its platform and is now developing 3D content. Obliques enable subscribers to measure the height of features and Panorama provides the viewing of an area from any angle. Already, $9 million or 13% of group ACV relates to Oblique or Panorama product features which is further tangible evidence that management are spending money shrewdly.

Nearmap is continuously expanding the range of products and tools available on its imaging platform which enhances the company’s competitive advantage.

Nearmap’s other source of competitive advantage is its growing historical database of images, which spans several years of multiple captures per year across most of the populated parts of the US and Australia. The company has recently announced that it is expanding into New Zealand which will add to this asset and further diversify the business.

For a while I had reservations about Nearmap because of its executive remuneration. In particular, I felt that the non-cash component was excessive and unfairly diluted shareholders’ interests. Today, executive remuneration remains high but the non-cash component has fallen in the past couple of years. Total remuneration should continue to fall as a proportion of revenue as the business grows and I think that management are executing well so am happy for them to be well rewarded. 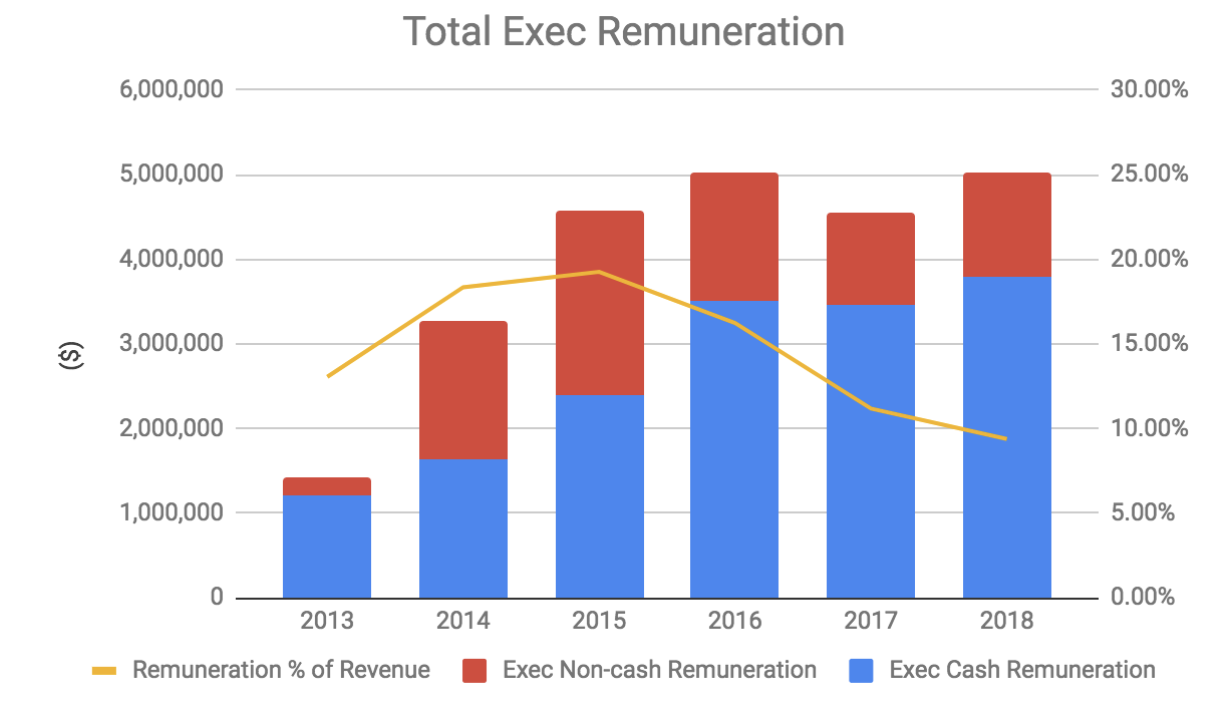 I do have one major concern with my investment in Nearmap. Its current market capitalisation is over $700 million and so for investors to realise significant further gains I think that the company will need to become a quasi-monopoly in the US aerial imagery market. I think there is a good chance of this happening because of the clear superiority of its product and how difficult it will be for others to catch up given its competitive advantage.

However, investors in Nearmap should keep an eye on competition as well as potential substitutes such as satellites and drones. My current view is that neither satellites nor drones pose an immediate risk. Satellites are expensive and struggle to achieve the same clarity due to atmospheric interference and cloud cover. Nearmap has the option of switching to drones if and when it becomes preferable to use them over light aircraft.

“With our unique technology and business model which no other aerial imagery company globally has been able to replicate at scale, Nearmap is well positioned to execute on our vision to become the world’s leading provider of subscription access location intelligence.”

I do think that Nearmap is priced for perfection though, which means the downside risk is large should the company disappoint. I will not be selling my shares whilst the momentum in the stock remains, but should sentiment turn (as evidenced by a falling share price) then I would probably sell. However, I certainly will not sell for at least two trading days following the publication of this article.

I have clearly previously under-estimated the value of the new features Nearmap was adding. Arguably, this company has plenty of room to run: it could easily become a $1 billion company. However, one relevant question is whether they will raise capital again on that journey. I think they might. For that reason I am a little cautious here. It’s hard to value the shares in 10  years time if you have no clue how many there will be.

While the business is supposed to reach breakeven next year, that does not mean it will not raise capital again. Therefore, although I will definitely be keeping some of my Nearmap shares, I am actively looking to sell more of my Nearmap shares (I already sold around 20% of my original holding at $1.50, announced prior here). I will wait at least 2 trading days, and then I’ll probably sell around 20% of my current holding -- but only if (and when) I like the price.

Either way, it will remain one of my larger holdings.

Disclosure: Matt Brazier and Claude Walker both own shares in Nearmap at the time of publication. This article contains general investment advice only (under AFSL 501223). Authorised by Claude Walker.