MNF Group (ASX:MNF) yesterday released its results for FY 2018. Unfortunately for shareholders, they were the least pleasing results I have witnessed from this company. Fortunately, the long term investment thesis remains in place.

The headline numbers saw revenue growth of 15% to $220 million and net profit drop 2% to $11.9 million. Earnings per share -- uncharacteristically -- fell short of guidance, coming in 16.25 cents for your full year. You can see the longer term view, below: 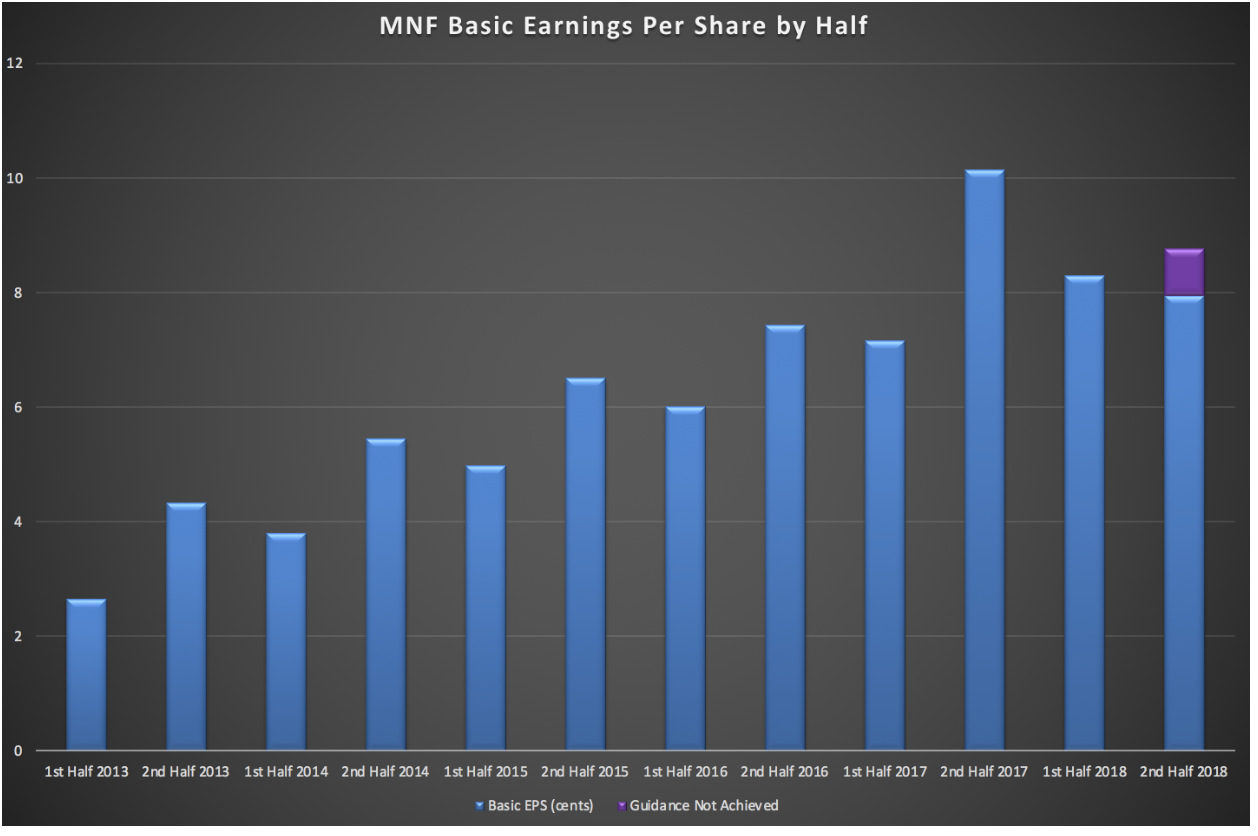 I would not want to discourage management from making long term decisions for growth, but I cannot deny it is clearly disappointing to see earnings per share in the second half fall below 8 cents. This is a substantial half-on-half drop of 20%. Incidentally, that is about how much the share price fell, yesterday. The guidance miss is probably the driver of the share price fall.

Of course, as shown by the purple part of the column on the right, the company had already warned the market that earnings would be lower than one might have hoped. The reason for the lower earnings was the investment in Pennytel.

Pennytel is the new consumer facing mobile reseller. It sells the Telstra network to baby boomers in regional Australia. While I think this is a smart strategy; leveraging the better network and targeting the ‘low data usage’ crew, but the plan is off to a slow start.

The most unfortunate aspect of today’s update was that the Pennytel plan isn’t going as well as hoped. However, I think that the project could still pay off very well even while it falls short of expectations. You can see what the company originally hoped, below: 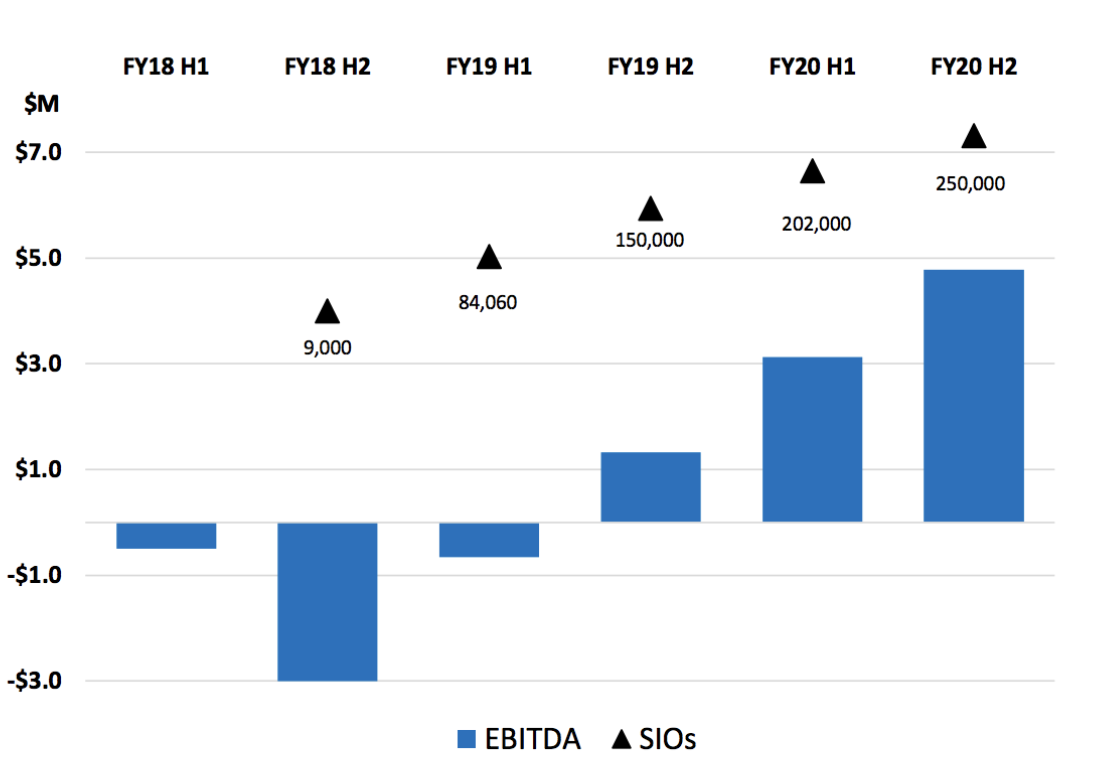 Yesterday on the conference call, the CEO said that the uptake was around half as fast as had been hoped -- and the marketing team is learning. However, I need to clarify whether that ‘half’ was revenue or services. Conservatively, I’ll assume services.

In that case we can assume that there were over 4,000 services. That’s far from ideal, but it is also worth noting that the company is likely achieving a lower ARPU than what it had modelled.

For example, I took this top screenshot in February 2018, and the bottom one yesterday: 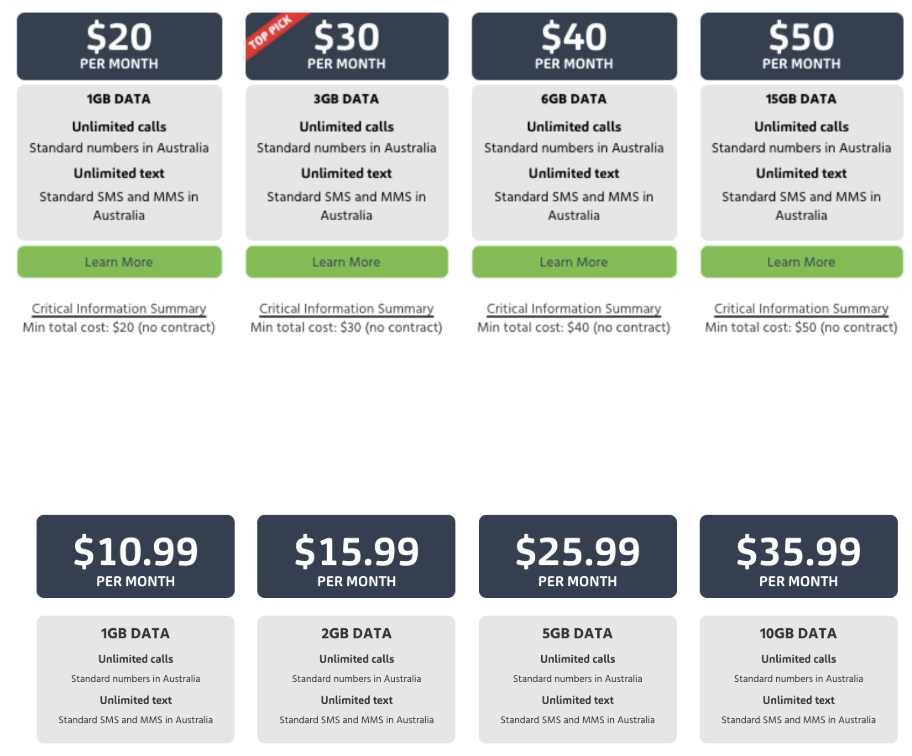 The original business case was based on achieving 250k mobile subscribers by June 2020. I would say there is close to zero chance of that happening without a major increase in projected costs. Having said that, the company has clearly already reacted. It has merged Pennytel with its existing domestic business and consolidated costs.

The report said that the “Residential sub-segment is expected to cost the company approximately $0.5m at EBITDA level as the customer acquisition run rate increases.” Given that this sub-segment contributed about $3 million in gross margin in 2018 (albeit shrinking), I estimate that the company is now budgeting about $6 million to get Pennytel to breakeven, rather than under $4 million. I think that will be hard to achieve, but I also think that there’s a good chance the end result is reasonable, even if nowhere near as good as hoped. This may be a case of aiming for the moon -- missing, but still making it through the clouds.

I have focussed here on the problem area of domestic residential, but the domestic small and medium business segment is the largest contributor to the segment and it is growing. So too is the recently purchased conference call business. Meanwhile, MNF Enterprise is moving to a more recurring revenue model -- all this means that the domestic retail segment was flat, despite the ‘residential’ segment being a drag for now.

Domestic Wholesale -- The Jewel In The Crown

Moving on to happier subjects, the core domestic wholesale business managed to increase its customer numbers over the last six months, after consolidation reduced partner numbers in the first half. 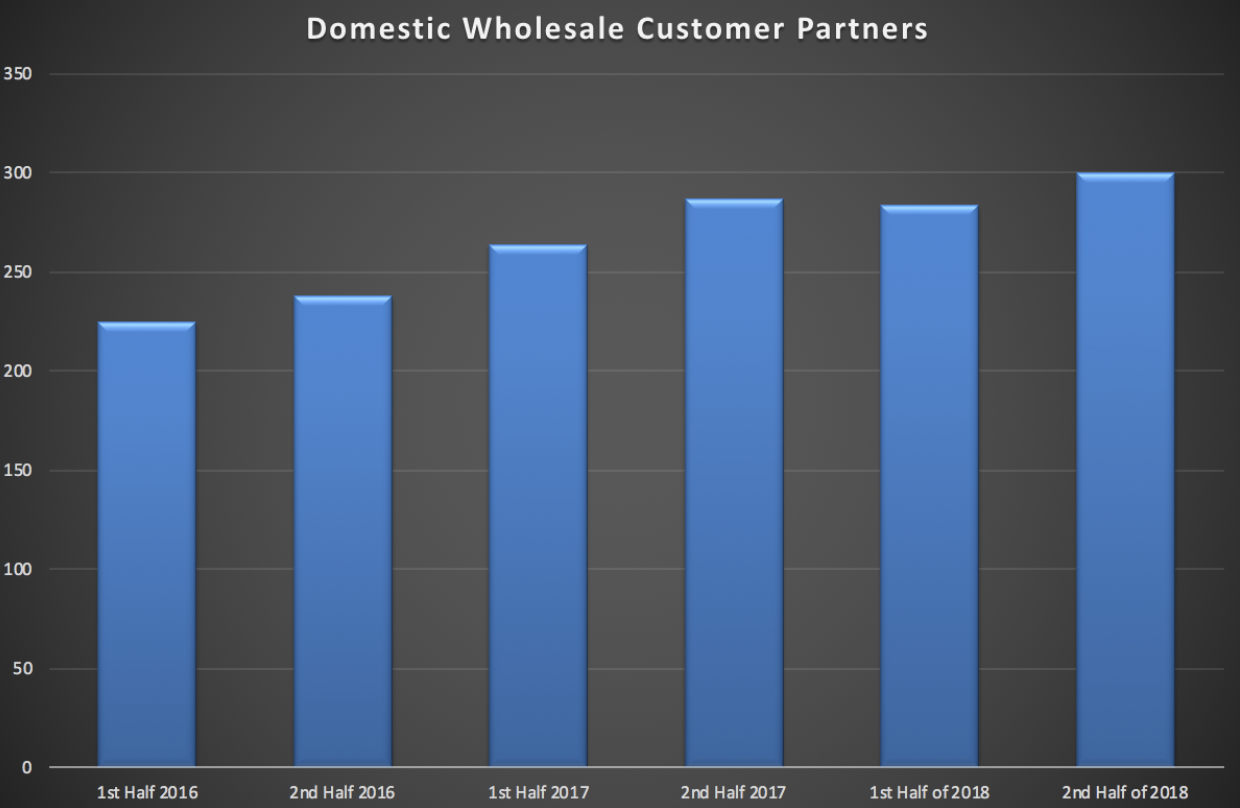 This segment performed extremely well overall, with gross profits up 15%, and a sharp increase in iBoss SaaS customers, as you can see below:

This is the more positive story that the market was focussed on when various small cap funds were talking up the stock. Presumably those same funds have sold or are selling, now that the narrative has changed. Many small-cap funds are more momentum players than long term holders, which is fine; but their prognostications should be taken with a massive pile of salt -- if they are talking about a company, they are probably selling it.

This business grows organically each year and the plan is to replicate it in Singapore. I’m in favour of the plan.

Global wholesale was largely responsible for the gross profit miss. The company had predicted it would make $72.3 million but in the end made $69 million, some $3.3 million short. The fact that this translated to a net profit miss of just $400,000 actually suggests that the company scrambled to find savings -- and fair enough.

The culprit in this uncomfortable spot was the global wholesale business which saw margin compression in the second half. As a result, the second half was actually weaker than the first half, by around $25,000. The year on year growth was 16%; so you could probably forgive them for thinking it would keep growing. The reality is that they made less transaction-based revenue than they thought they would.

Over time, the company is selling more of the software-as-a-service style products, into this segment, so it should become less volatile.

Where To From Here?

This was a tough year for MNF Group. In part, that’s because it reinvested in growth, and in part because the global wholesale segment disappointed. Its cashflow looked bad due to the unwinding of a massive payable sum, received in 2016. Look to the huge cashflow in 2016, if you are concerned by the outflow this year.

Capital expenditure remained within reasonable levels, once again suggesting that the company owns good assets that allow high ROIC growth when combined with the expertise of management and employees. 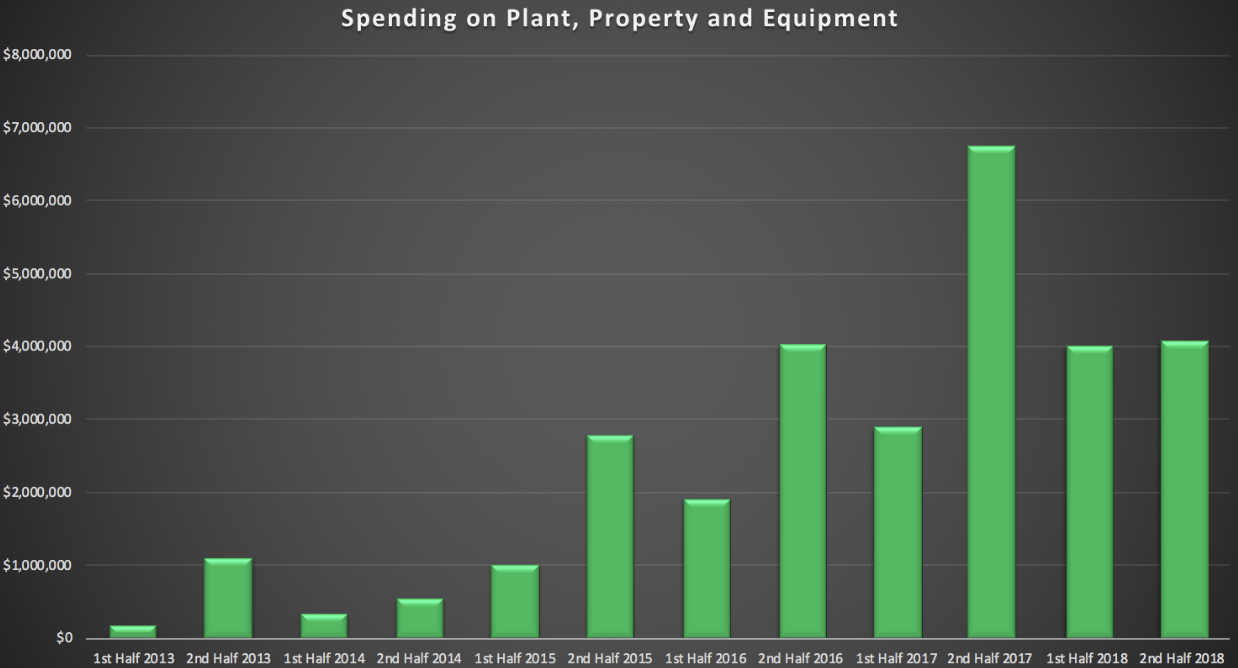 Touching on employees for a moment, I was pleased to hear that the company had managed the consolidation of its residential operations without forcing redundancy on anyone. The fact that this was a priority for the company shows good sense. Companies that are ambivalent about letting people go in tough times will lose more employees to competitors in buoyant times.

The company has moved to address its one segment that is in structural decline. It is always easier on the financials to just let declining business spin off cash, without investing. I am glad that MNF has decided to stay active in the retail space, since it enhances its ability to serve wholesale customers, and leverages tools it builds for its wholesale customers.

This bad year for MNF saw gross profit growth of 17%. The average half-on-half earnings per share growth rate, in the last 4 years, is over 10%. If you narrow that to 3 years, it is still 8.9%.

Either you think it’s game over for MNF Group or you think they will show grit and resilience and continue to build this business.

If the former, sell. If the latter, then I think that we may see some good buying opportunities arise.

Personally, I think that this remains a quality company and -- although it is a large position for me -- I retain an appetite to buy more shares. I think that FY 2019 is likely to be another tough year but we should see improved statutory results in FY 2020 as the Pennytel and Singapore plans become profitable. This could be further delayed if the company makes a big push into NBN. Therefore, short term focussed investors are unlikely to stick with the stock, and sentiment could turn pessimistic.

As a result, I will be looking to buy more shares in MNF Group around $4.15 - $4.65 , all else being equal, at least 2 business days after publishing this post. Keep in mind I already have shares, so I'm going to be patient about the price I have to pay to buy more. I would not rule out paying a higher price if I feel like it, later on, but I am not in any rush.

Disclosure: Claude Walker owns shares in MNF at the time of publication. This article contains general investment advice only (under AFSL 501223). Authorised by Claude Walker.