LaserBond Limited (ASX:LBL) was founded in 1992 by engineer Gregory Hooper along with other members of his family. Brother Wayne Hooper, also an engineer, joined the company in 1994 and the two still run it today. Gregory is responsible for much of the technology the company has developed over the years and Wayne is focused on business strategy and operations.

Essentially, Laserbond uses various techniques to strengthen the surface of heavy duty equipment such as mining drill bits and steel mill rolls. Initially the company was focused on, and developed, its own techniques for thermal spraying. That is where semi-molten droplets of a coating material are sprayed at high velocity onto a substrate material. Since 2001, Laserbond has become a world leader in laser cladding technology which involves bonding a surface material to a substrate using a high power laser. This produces a metallurgical bond and unlike welding is done at low heat minimising damage to the materials. The company also does heat treating, machining and welding.

Laserbond has three operating divisions: services, products and technology. The services business is reclamation work where customers wish to extend the life of equipment. In many cases, Laserbond treated equipment can last more than twice as long. The products division makes new equipment for either OEMs or under Laserbond’s own brand name. These products are designed to last much longer than competing products that have not undergone a similar surface engineering process. Finally, Laserbond manufactures laser cladding rigs which it sells overseas to customers in non-competing industries along with ongoing training and maintenance.

In all cases, Laserbond saves its customers money by extending equipment life at a fraction of the cost of replacement. Although its products are a little more expensive, their lifespan is often multiples of alternatives. The techniques are also environmentally friendly because they use a tiny amount of energy compared with manufacturing new products.

Considering 75% of Laserbond’s revenue is sourced from the mining sector, the business has been surprisingly resilient since listing in 2007. On an organic basis revenue has grown steadily, from $2.6 million in 2003, to around $20 million this year. Even during the mining downturn between 2013 and 2015, revenue was flat whilst most mining services companies suffered steep declines. This suggests customers aren’t willing to cut their expenditures lightly.

Organic profit before tax, excluding non-cash write-downs, has been less consistent, although the company has been profitable every year other than 2016, when it made a small loss. Between 2013 and 2016 Laserbond moved to a new larger manufacturing facility in New South Wales, established a greenfield operation in Adelaide, and invested heavily in staff and capital equipment, ahead of expected growth. All this affected profitability.

Many small and growing businesses experience such profit volatility until they reach a scale where incremental investments become insignificant relative to profits. You can see how this has played out with Laserbond in the image below: 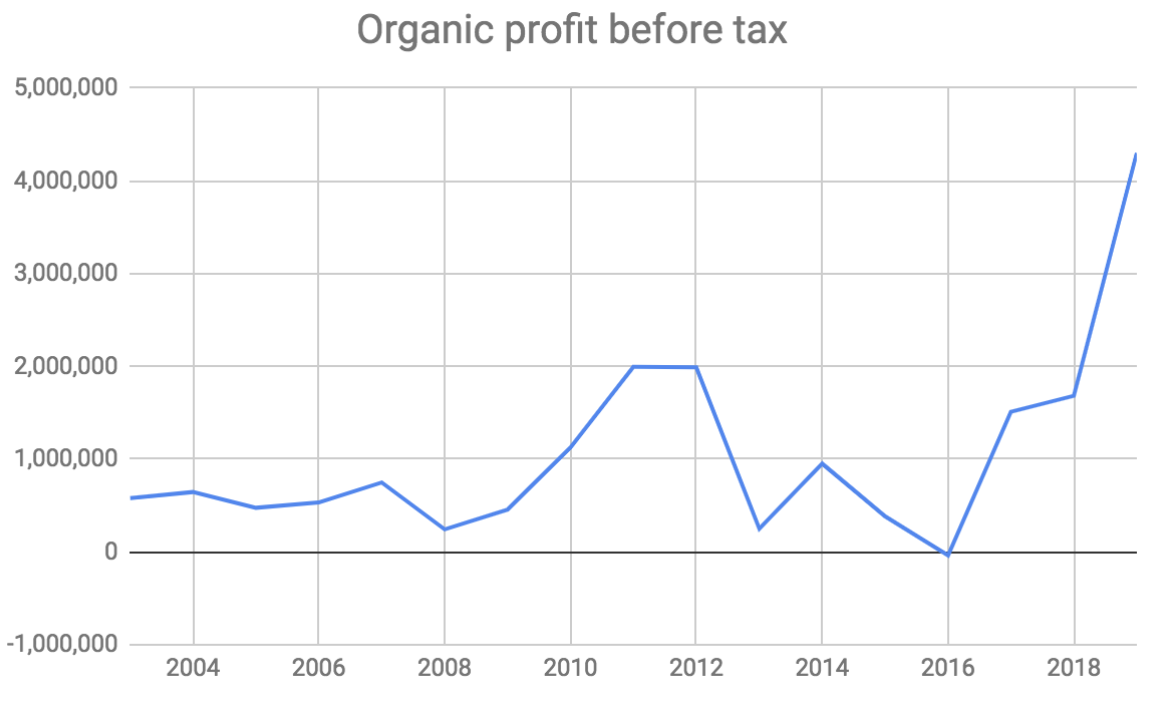 The 2019 figures in the charts above are my estimates and all data excludes contribution from an ill fated acquisition of Peachey’s Engineering made in 2008, and disposed of in 2013. The idea behind buying Peachey’s was to provide a beachhead in Queensland where Laserbond could roll-out its laser cladding and thermal spraying services. The services business is dependent on proximity since the equipment is expensive to transport (products only require a one-way trip).

Laserbond paid $3 million upfront for a business that was expected to deliver $1.4 million in earnings before tax. The trouble was that it was heavily dependent on Rio Tinto’s Alcan aluminium refinery in Gladstone. Shortly after Laserbond acquired Peachey’s, Rio scaled back its aluminium business impacting revenue. At the same time, the Gladstone LNG plant was under construction putting upward pressure on wages for skilled tradesmen and Peachey lost some of its best employees.

When I spoke with Wayne Hooper, I asked why the company was still considering acquisitions following this experience, and given that the greenfield expansion into South Australia had gone so well. He said that lessons had been learned and the next time they will make sure everything is right. We will see, but in any case, it is an acceptable risk since acquisitions are not the core strategy of the company.

Wayne made a comment during our conversation that I thought underscored the innovative nature of Laserbond. When I asked about the risk of selling technology packages overseas and, how to ensure customers continue to pay licenses, he said that customers will need years of support to properly learn the techniques. On top of that, Laserbond manufactures the cladding systems themselves out of necessity, because  when Wayne and his brother first started getting interested in laser cladding, they couldn’t find a company to supply them with the setup they wanted.

Clearly, there is significant key man risk in the business but this is something that management is aware of. This is part of the reason for the ongoing staff recruitment. They have hired an R&D manager with a PhD from Germany and continue to broaden the management team.

I think that Laserbond may be at an inflection point. Historically it has been a niche services business focused on reclamation with obvious limits to scalability. But in the last couple of years it has established the products division which has the potential to grow significantly and yield economies of scale over time.

It hasn’t been entirely smooth progress so far. The company’s down-the-hole hammer products have yet to take off and Wayne said this is because Laserbond doesn’t currently offer the same range as competitors. This is being addressed through a collaboration with Boart Longyear and the University of South Australia which should yield a variety of products that Boart may potentially distribute in the future.

The addressable market for Laserbond’s surface engineering techniques is vast since they can be applied to virtually any piece of heavy equipment. The large manufacturers currently don’t really use the techniques and so Laserbond’s competitors are mainly small innovative services operations like itself. Even after a recent run-up in share price, Laserbond is capitalised at just over $20m with minimal net debt. This compares to recent guidance of at least $1.8 million earnings before interest, tax, depreciation and amortisation (EBITDA) for the first half of 2019. The future looks bright, although there may be a few more bumps in the road along the way.

I greatly appreciate Matt contributing this research into Laserbond, in which we both own shares. In some ways, it reminds me of Kip McGrath Education Centres (ASX:KME), because it is a tiny, family run company that seems to be heading in the right direction. In my experience these kind of companies often fall off the radar of most investors, completely, so the observant and patient investor has the chance to buy shares at attractive prices.

If Laserbond is actually a good quality business, then there will probably be plenty of upside over the long term at current price of 23 cents per share, with a (growing) dividend yield of 2.6%, fully franked. However, I would consider a yield of 3% - 4% to be my target price to buy shares.

But the real value is in following along with the story, because a company this size will almost certainly be forgotten, at times. At those times that I will be looking to buy in my target price range, with a patiently set limit order. The other time I like to buy tiny companies like Laserbond is if there is some sort of good news but the market is slow to react. Both scenarios are worth watching for, in my view.

Disclosure: Matt Brazier and Claude Walker both own shares in Laserbond at the time of publication, and will not sell for at least two days. This article contains general investment advice only (under AFSL 501223). Authorised by Claude Walker.