Not everyone I’ve talked to sees the same value I do in Energy Action (ASX:EAX) so I thought I would share this valuation with my readers; please feel free to let me know what you think.

This article assumes a fair bit of knowledge; if you want the basics, you can find them here and here.

I’ve split the businesses to make an estimate of how they will perform in FY2013. In all my projections, I aim to underestimate results (because I want a margin of safety anyway). I have assumed that sustainability (Activ8+) will actually underperform 1H2013 by 5% in both scenarios. In the low estimate I have simply doubled 1H2013 revenue for Procurement and Monitoring. In the Mid Estimate I have attributed 2nd half improvements of 2.5% and 3% respectively. I have added in the expected contribution of Ward Consulting to Procurement and Monitoring in the 2nd Half, but not attributed any growth to that business.

The purpose of this exercise was to explore the growth rate of the company, based on a conservative set of assumptions. The conclusion, is that FY2013 will be an improvement of 1.2% - 19.4% on FY2012.

Looking beyond FY2013 here are the main reasons that I believe that the company will be able to continue on this growth trajectory.

However, there are some things that could prevent the company growing

These valuations are more conservative than Fosters and Ord Minnett. The discount rate is 10%, and the remainder value is 8x cashflow. The critical factor is that I have simply estimated the starting cashflow. The cashflow last half was $2.4 million, and I think this company is growing.

Key assumptions: Strong Industry Tailwinds, plus improving margins through scale and cross-selling services. Remainder value in 2017 is based on 8x Cashflow, which is a bit unrealistic, because if the company does actually grow every year until then, it would probably be going for a lot more than 8x cashflow. 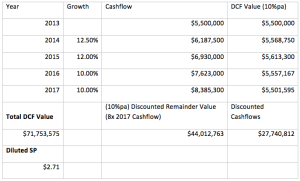 The real question is: will this Energy Action keep growing by at least these amounts for the next four years (and beyond)?

The Author owns shares in Energy Action both directly and indirectly.

Claude, I think you could be more generous in your terminal value and still be conservative. Assuming just 1.5% terminal growth in cash flow along with your 10% discount rate gives a multiple of 11.8x your 2017 CF rather than 8x.

Fair point, thanks for your thoughts.

It could grow more quickly or more slowly than that model suggests. That model is internally inconsistent as I said... unrealistic. Overall, given the generous assumption for cash-flow in 2013, I'm still cautious about the model. And also the investment thesis.