It has been a tough couple of years for GBST Holdings Limited (ASX:GBT) since their former CEO Stephen Lake stepped down in 2015 and this year was no different. Revenues rose just 0.3% to $88.3 million and EBITDA (earnings before interest, tax, depreciation and amortisation) was up 1.7% to $12.2 million.

NPAT (net profit after tax) was down 11.4% to $6.2 million and free cash flow was $3 million, down from $9.2 million last year. The stock trades on a trailing twelve month dividend yield of 2.4% at current prices.

GBST’s results are messy so it is difficult to know which metric to look at to understand business performance. I believe that EBITDA is the best of a bad bunch of choices for the following reasons:

- Shares on issue have risen by less than 1% over the past two years so an earnings based metric is equivalent to an EPS (earnings-per-share) type calculation for the period.
- Similarly the debt structure of the company is largely unchanged with cash falling slightly from $11.7 million to $11.4 million and no debt in either year.
- The company has a falling amortisation charge related to legacy acquisitions which boosted profit before tax by $1.5 million this year compared to last.
- Tax and finance charges are erratic year-to-year. For example last year the company recorded a tax credit of $2 million versus a $1.5 million expense this year.

Despite all of the above, EBITDA is not perfect. In particular it does not account for the fact that last year the company capitalised just $1.2 million of R&D costs compared to $7.3 million this year so arguably this year’s results are even worse. Furthermore, it expensed less R&D this year compared to last, $7.7 million versus $9.6 million.

The reason for the hike in R&D spend is due to a major multi-year investment drive begun when current management took over in 2016. The project is expected to be partially one-off in nature with ongoing maintenance spend estimated at $6 million to $8 million but not before next year when investment will ramp up further. 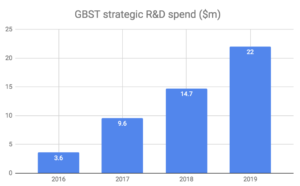 A page in the presentation (click to enlarge) accompanying today’s results summarises what this money is being spent on. As a technology company I personally don’t think it is correct to quarantine such spend since it seems it is mostly to maintain the competitiveness of existing products and is therefore a business-as-usual (BAU) cost (although I acknowledge that the cost is likely to reduce in future). 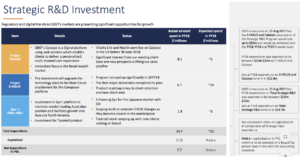 A look at historical revenue trends further supports the view that the R&D spend is a defensive move. 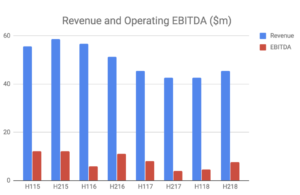 It looks as though GBST could have finally turned a corner in the second half of 2018 although the EBITDA result does not include the additional $7 million of capitalised R&D spend.

The trouble is it is very hard to know what future years will look like. The company separates its revenue into lumpy project related Services income and recurring License income. However, recurring revenue has taken a hit recently as a couple of major GBST lost a couple of major clients in Australia underscoring the company’s customer concentration risk.

A couple of wins in 2017 could indicate improvement in 2019 as License fees flow through. These include Investec Wealth & Asset Management who are in the top three wealth management firms in the UK by assets and who are now using GBST’s wealth management product Composer. Then there are a couple of distribution deals in Japan and the US done in 2018 for the company’s capital markets product Syn~.

The fact that management have elected not to provide guidance underscores the uncertainty as does the fact that the company hired a new CTO, CFO and Head of HR in the 2018 financial year. Then there is the profit impact of the adoption of the new accounting standard AASB15 although this is not expected to be significant.

With a market capitalisation of just shy of $150 million I think that GBST looks fully valued given the company’s lack of growth in recent years and no guarantees going forward. There are better opportunities out there in my opinion.

I do not own GBST shares and I would Sell GBST if I did.

The Author of this piece, Matt Brazier, does not own shares in GBST. This article contains general investment advice only (under AFSL 501223). Authorised by Claude Walker.