Ecofibre (ASX:EOF) today reported its maiden set of full year results as a public company. The company’s share price has been something of a rollercoaster ride over the 4 months since listing: a 70% first day stag profit on its $1.00 IPO price, then essentially 3 months in a sideways range between $1.90 and $2.20 before soaring to $3.60 in early July in advance of its June quarter 4C (quarterly cashflow report). Since the release of its 4C, the stock traded down below $3.00 – no doubt a mix of profit taking; general recent choppy market trading over the past few weeks during which time the broader market has arguably gone “Risk Off” in advance of reporting season; and raised eyebrows at “valuation” (presumed historical P/E multiple of ~300x at a market capitalisation of ~$1 billion). And then yesterday the share price soared 25% to $3.69 (a record close) in response to the FY19 results, before retracing to #3.39, today.

As will be surprising to exactly zero readers, there is strong momentum in the business – as evidenced by FY19 annual revenue growth of more than 500% (spoiler alert: unlikely to continue ad infinitum). The FY19 results and accompanying investor presentation didn’t contain a lot of new operational metrics – the US independent pharmacy channel bar chart at right was included in the June quarter 4C. The key takeaway is still that the Ecofibre pharmacy network of 3,200 stores represents just ~15% of the total US independent pharmacy market and that there is significant further penetration growth available.

It was curious to note that selective bulk white label contract manufacturing for certain “strategic” customers has increased from 10% at 1H19 to 16% for the full year – implying that 2H19 white label and bulk sales comprised 20% of total 2H19 sales. I’ve previously assumed that these sales are typically lower margin than Ananda Professional volumes to distributors and Ananda Hemp sales to consumers via the company’s website – and yet gross margin increased materially from 65% in 1H19 to 76% for FY19.

I was interested to see mentioned in the investor presentation that the company has created a CBD 360 online education portal for the pharmacists and practitioners in its independent pharmacy network – a sensible investment in my view – both in ensuring a well-informed pharmacy sales channel capable of driving sales to consumers, as well as building trust with pharmacists.

In the June quarter 4C (see here for our previous article), the company guided towards full year FY19 revenue of $35.6M and profit before tax of $4.5M – both of which were higher than our back-of-the-envelope estimates from our April initiation report (see here). Ecofibre’s full-year FY19 results are summarised below left. Note that FY19 NPAT is inflated by the first time recognition of Deferred Tax Assets ($2.0M), otherwise NPAT would have been closer to $4.0M.

It’s clear that the company’s current stellar growth trajectory is being driven almost entirely by its US business – which posted growth of 646% to $34M in FY19, demonstrating that Ecofibre’s strategic decision to grow market share through the independent pharmacy channel is working. The investor presentation included a quote from US market research firm Information Resources Inc which suggested Ananda is the “clear market share leader of CBD products across all US retail pharmacies (as measured by sales)” – however I wasn’t able to track down this report, and I imagine the market is extremely fragmented at such a nascent stage. Hopefully the company will share further information from this type of market research in the future.

The Australian business still increased revenue by 24% in FY19 – albeit off a very small base of ~$1M. Ecofibre’s investor presentation did disclose that the Australian business will commence supplying to Woolworths’ private label Macro Foods brand from August 2019 onwards – which I expect to materially increase the volumes of this business going forward and hopefully tip it into profitability in its own right.

As previously noted, the Hemp Black business (in partnership with Thomas Jefferson University, a top 20 shareholder in the company) is pre-revenue. FY20 will prove a pivotal year for this division with early commercialisation activities about to commence. The company has previously been highly secretive around potential future products for Hemp Black, alluding to confidentiality required by patent law – but the investor presentation for the first time referred to 5 “core” Hemp Black products:

CEO Eric Wang has previously stated his belief that Hemp Black will eventually become the largest revenue generator for the company. I am also cautiously optimistic on this given the thousands of years of human history of utilising hemp fibre for industrial uses such as clothing and building materials. It’s going to be another 12 months at least before we’re able to more accurately gauge the revenue potential of this division in any event.

The company provided no hard numerical FY20 guidance – not surprising given how fast revenue is growing and the number of moving parts in such a nascent hyper-growth market (as we’ve noted previously). Note that Ecofibre did not provide any formal FY19 forecast guidance in its prospectus, waiting instead until the release of its March quarter 4C in mid-April to provide revenue, gross profit and opex ranges for the forecast year to 30 June.

Clearly the lack of formal guidance is unhelpful for any Deep Value investors chewing through their fingernails with extreme frustration/puzzlement while watching from the sidelines. As Wise Monkey Matt Joass has noted in his seminal piece on Inflection Points however, traditional value metrics (both historical and 1-year forward) appear ludicrous for companies which have just become profitable (as Ecofibre has for the first time in the year just passed).

So what range of FY20E potential outcomes might be acceptable in the context of Ecofibre’s current $1.1 billion market valuation (at today’s $3.69 share price)? The following bewildering – even to me – table ponders a number of different scenarios:

But… 60 scenarios is too many!! So, the table at the very bottom then estimates what FY20E NPAT *might* look like for EBITDA of $10M, $20M, $30M, $40M and $50M (all within the EBITDA possibilities presented) making certain assumptions re below-EBITDA items (see fine print below table): 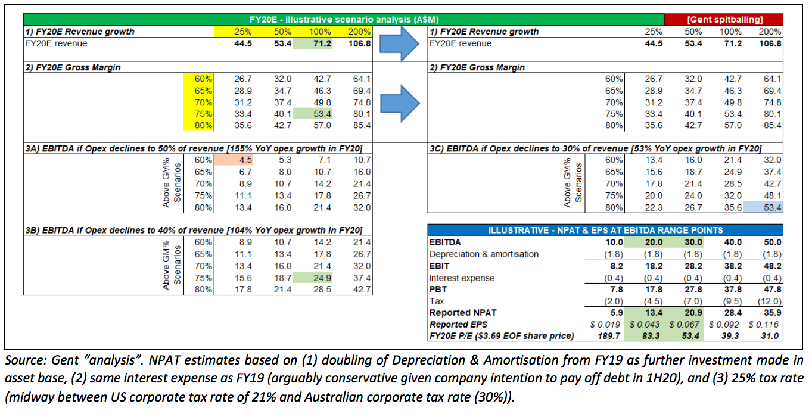 The above is clearly the by-product of the combination of several assumptions regarding (fast) moving parts – a meaningful variation in any one of which (even including effective tax rate) could significantly move the needle from an FY20E EPS perspective.

I think FY20E EBITDA of $20-30M is certainly possible however (noting that EBITDA increased by ~$14M in FY19). For illustrative purposes (see green shaded cells), a combination of:

……would deliver EBITDA of $24.9M For FY20E, and NPAT of ~$17M (per fine print assumptions re below-EBITDA items above) – being the mid-point between $20M and $30M EBITDA in the bottom table. Ecofibre would then be trading on a ~65x forward P/E at its current share price of $3.69 – but then would have almost tripled NPAT in FY20E (or more than quadrupled if you removed the one-off tax-benefit). I don’t think it’s extremely far-fetched that the company could generate EBITDA of $30M-$40M in FY20E (cc: @AussieBaggies) – at which point the current forward P/E is probably closer to 45x. Note however that as the business scales, it will require significant focus from management to rein in costs and pull the right levers to protect profitability in this high-growth environment.

Please note that this section on FY20E is merely some “thought bubbles” round what potential revenue growth and margin assumptions could be encapsulated by the company’s current market valuation. This of course ignores any value attribution to Hemp Black – which is unlikely to generate any revenue until FY21E – and about which I am personally very optimistic.

I continue to be optimistic about Ecofibre. I added a little more to my position in early June around $2.00 (though not as much as my gut was telling me to – for which I am now kicking myself).

At a current historical FY19A P/E multiple of ~168x (including the benefit of the one-off tax gain), the company is clearly not going to be a Deep Value staple any time soon – but readers will know that we are focused on relative growth profiles of companies which look forward more than one year (often a few years out) to try to determine if we are buying Growth at a Reasonable Price (“GARP”). Fast-growing companies are simply not available to buy at mid-teen P/E multiples and so we must be prepared to pay a higher multiple for this growth.

**If** Ecofibre can continue to grow its top line at 100% (or more) for the next 2-3 years as the CBD market expands, I would expect the share price to be considerably higher than it is today despite the frothy FY20E forward multiple. Sceptics may opine that the current share price projects a continuation of FY19’s impressive growth rates into FY20 – but actually it doesn’t: a 500% revenue increase in FY20 (to revenue of >$200M) would probably generate NPAT of ~$50M using the spaghetti of assumptions above – at which point the company would be trading on a P/E of ~23x currently. **For the avoidance of doubt, I absolutely do not believe the company can continue to grow revenue at 500% in FY20**.

The company has pledged to give shareholders increased clarity on FY20E forecasts as the year unfolds – but I’d be surprised if we got any meaningful FY20E guidance until after the release of 1HFY20 results in February (mid-February at that given how refreshingly punctual (read: non-tardy) management have been in releasing 4Cs and results so far. For the meantime I will continue to hold my $EOF shareholding – although I expect the share price to continue to bounce around a lot (I expect some profit taking shortly with buyers in June having generated returns in less than 2 months of 70-80%).

Accordingly, we continue to hold Ecofibre, but only as an appropriately sized very high risk investment, especially given the current optimism in the share price.

Disclosure: Both I (@Fabregasto ) and Claude Walker hold shares in Ecofibre and will not sell for at least 2 days after the publication of this article.

If you don't yet use Sharesight, please consider signing up for a trial on this link, and we will get a small contribution if you do decide to use the service longer term, (which in turn should save you money with your accountant, or time if you do your own tax.) Better yet, you can get 2 months free added to an annual subscription.