Elixinol Global (ASX: EXL) released its full year FY18 results today and followed up with an illuminating investor call. The share price climbed ~7% to $3.55 in response (not far from the all-time high of $3.69 reached earlier this month) – though there arguably wasn’t a whole heap of new or surprising information in today’s news.

EXL had already flagged full year revenue of $37M (as detailed in our report on the company’s 4C in late January) - however it was pleasing to see $0.7M of underlying EBITDA of $0.7M for the year (albeit after a considerable investment in ramping up capabilities ahead of the growth expected in the business for the new year – including continuing to fund the start-up Nunyara medicinal cannabis business). We flagged this likely investment in our previous report:

“…… readers should be cognisant that given the significant market opportunity available to Elixinol as a result of the opening up the US hemp market, it’s also possible that near term profitability is deliberately put on the backburner while the company invests in its supply chain and sales & marketing capabilities to meet the accelerating demand for hemp-based products – with the expectation that this would hopefully result in a significant boost to market share and profitability over the medium term.”

The table below summarises FY18 performance for the business, and splits the financials between the two main businesses: Elixinol in the US (which accounted for 87% of full year sales and all of the group’s profitability) and Hemp Foods Australia (“HFA”). 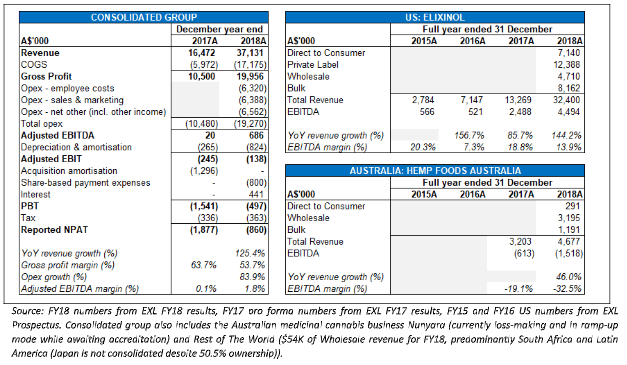 Providing true comparable historical financials for EXL is made difficult by:

So we’ll work with what we have. We can see that the lion’s share of group growth in FY18 was generated in the US business – recording an impressive 144% growth rate. However, the EBITDA margin declined from 19% to 14%, due to a combination of significant growth in lower margin private label volumes and increased investment in sales & marketing costs (including a complete makeover for the consumer-facing website and a large promotional campaign). The company is positioning for a substantial expansion of the market in 2019, particularly following the signing of the Farm Bill just before Christmas and the resulting opening up of the mainstream retail market. Interestingly, the company reported that the US product range had increased by 50% from 30 at August 2018 to 45 currently, with further products to be launched this year.

The Australian business also recorded an impressive lift in sales versus FY17 – however a restructuring of, and additional investment in, the sales & marketing function dragged EBITDA for HFA to a $1.5M loss. A number of new products were launched by HFA in late 2018 and early 2019, and management has high hopes for continued strong growth in 2019.

No financials were reported for the fledgling Nunyara medicinal cannabis business – there is no real update since the release of the December quarterly cashflow report. The company is still waiting to receive licenses from the Australian Office of Drug Control for medicinal cannabis cultivation and manufacturing. In the meantime, the ramp up of this business continues with construction of the “state-of-the-art” (per management) 5,000m2 fully integrated greenhouse cultivation, extraction and manufacturing facility scheduled to commence this year. Management expect to commence production (1-2 tonnes of medicinal cannabis in Year 1) and sales in 2020, and described the facility as designed in a way as to enable rapid modular expansion should market demand warrant it (a good example of long-term planning).

Operating cashflow was -$5.7M for FY18 – which includes prepayments to suppliers in order to lock in hemp requirements for 2019.

Earlier this month Elixinol announced its expansion into Europe – via the establishment of sales offices in the UK, Spain and the Netherlands, a sales team of 12 and a European MD. This followed the company’s $40M capital raising late last year to fund future growth opportunities. The company has been selling into Europe via distributors since 2017, but has decided to take control of its destiny in this region, so to speak. Supply will come from locally-based contract manufacturers. EXL has an ambitious goal of becoming a top-5 CBD business in Europe in 2019.

The investor call and investor presentation also touched on recent developments and initiatives that were already known – but which in combination point to a year of further growth in 2019:

Management did also reveal the recent launch of a new range of CBD powdered drink mixes (rapidly dissolvable in water) – comprising three daily drinks: Create for the morning, Build for during the day, and Dream at bedtime. Based on the CEO’s enthusiasm for this product on the investor call, the company has high hopes for this new product.

And finally the company did also flag likely expansion into Asia (outside of Japan, where EXL is already the #1 brand) and Latin America in the near term – which could provide a meaningful catalyst for increased sales and earnings and a higher share price.

The most important takeaway for me personally from today’s investor call however was management’s acknowledgement of a significant number of new competitors entering the market in response to the relaxation of the regulatory regime in the US. This wasn’t surprising given the enormous potential of cannabis products in many verticals from food & beverages, to medicine and cosmetics. The investor presentation and results announcement contained updated medium term market size estimates for both the US ($22 billion in 2022 per the Brightfield Group) and Europe €116 billion by 2028) markets.

It’s these sorts of mind boggling numbers which attract the attention of new market entrants and quicken the heartbeat of excited investors. That's fair enough, but we need to remember that it’s difficult to accurately predict medium term volumes for such a fast-growing space, and that these are likely estimates of the total market including segments (such as alcoholic beverages and tobacco being just one example) in which EXL does not currently play.

It will be interesting to see how successfully the company can defend and grow its market share as the market expands at a rapid rate and new competitors flood into the space – and the impact that this will have on margins. On the investor call, management iterated that it was “very confident” of the company’s market positioning. This confidence is based on its long history (comparatively, having launched in the US in 2014), brand equity, existing market share, large production capacity, ability scale, and also the significant investment being made to expand its sales & marketing activities to drive sales.

The company gave no hard guidance for FY19 – which was not unexpected given the rapid growth environment and the sheer number of moving parts here – but the CEO did sound very bullish on the opportunity ahead of the company. The combination of the huge growth potential of the market and Elixinol’s progress to date are reasons to be optimistic, in my view. As such, this paragraph from our initial report on the company still holds true in my view:

“We still think that EXL is a comparatively smarter post-hype (or first wave of hype) way to play the potential cannabis boom – as the only listed ASX cannabis player which is (1) generating meaningful revenue, and (2) profitable, albeit only recently and potentially with meaningful near term profitability deliberately pushed back while the company attempts a Land Grab in the US market.”

Given the significant run in the share price from $1.34 in September to $3.55 today, I would expect a some profit taking – especially as there may not be any share price catalysts until the release of the company’s March quarter cashflow in late April (unless the company announces new developments separately of course). As a “pot stock” I would also expect a degree of share price volatility over the course of 2019 as the market grapples with how to value a fast-growing company like this (as we await further financial updates on progress) – so we continue to recommend the company only to readers with a higher appetite for risk. Personally, I will continue to hold my EXL shares while I wait to understand how successful the company is in delivering on its growth ambitions.

Note from Claude: I have nothing further to add other than to say that the valuation makes me nervous, especially since we haven't really had a set of clean results as a result of acquisitions and the IPO. As yet I have not sold any shares, but I am not buying at these prices, and I may choose to reduce my position size at some point in the future.

Disclosure: I (@Fabregasto ) have a position in Elixinol – though sadly not added to since our initiation report or the previous December 4C update – and may add to my position in the future – though not for at least 2 days after the publication of this article. Claude Walker also owns shares in Elixinol (and will not trade within 2 business days of publishing this article).

This article contains general investment advice only (under AFSL 501223). Authorised by Claude Walker.