Losses for the year blew out to a massive $17.3 million, down from $13.6 million last year. A veritable explosion in pay to employees more than explains the difference, with expenditure on salaries and the like up $10 million (or 35%) to $38 million. And that's before you consider the increased occupancy expenses, partially related to a brand new office.

The only bright point was that revenue was up around 25% to over $76 million. I would have thought a company earning this kind of revenue should be able to make profits, so it's very confusing that lost over $17 million over the last 12 months. The company itself commented that "Control over labour and travel expenses remains important to overall organisational productivity given these items accounted for approximately 71% of total operating expenses in FY18".

Shareholders must recall that directors Igor Van De Griendt and Shaun Holthouse sold over $9 million worth of shares between them in January this year at $1.55, after the end of the financial half year, but before the company reported those results. The stock price plummeted when those results were released on February 22. According to the table below Igor Van De Griendt received $407,032 in total remuneration for 2018, and Shaun Holthouse received $336,551.

In the same financial year that they sold stock and received this remuneration, the share price of the company dropped over 60%. Since July 2016, the company has raised capital at $3, then $2, then $1.10. All those who bought those shares in those offerings are now sitting on a paper loss at $1.08.  The remuneration report seems to suggest that those two directors will be paid less in the current financial year. However, the chairman Adir Shiffman looks set to receive $300,000 for his services in FY 2019, just as he did in FY 2018.

Importantly, Catapult books costs associated with rental wearable units through its investing cashflow. In 2018 "the Group wrote off rental units with a net book value of $137,290". They also depreciated the existing fleet by $2.3 million but added over $3.1 million, suggesting that charge will rise in the future. There was also $1.5 million in share based remuneration expense. These factors partially explain why cashflow is stronger than statutory profits.

Having said that, it is certainly positive that the company has produced positive operating cashflow, which was $6.4 million for the year. However, free cashflow was negative at -$9.6 million.

Catapult does not make it easy to calculate the number of elite units sold each half or quarter, anymore. However, they said the subscription mix 57% of total units sold and we can see that 5,330 subscription units were sold during the year. This implies about 9350 units for the full year. The company has stopped reporting unit sales quarterly. Therefore, in the chart below, I've assumed that quarterly sales equal 50% of half yearly sales and used the data from the first half to estimate the third and fourth quarters. 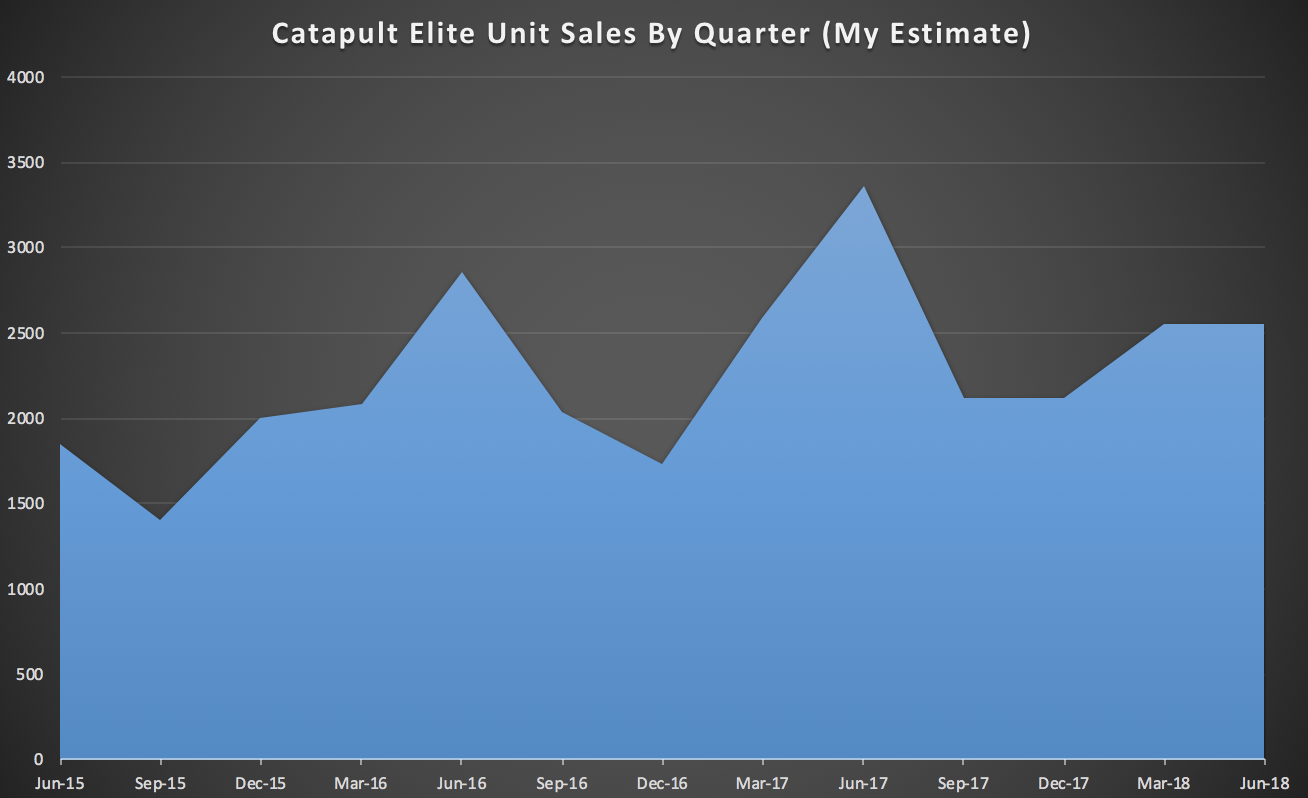 I regret having overestimated this business (sorry), and I am tempted to sell my shares just to be done with it. The reality is I made a bad call and I lost money for my readers. I've lost a lot of sleep over the years since I said the stock was a buy.I apologise unreservedly for the error.

While my first mistake was to call it a 'Buy' my second mistake was not to fix the error as soon as the evidence was there that I was off the mark.

I should have been more skeptical, and I should have found the article where the Chairman said 'I feel the excitement around wearables is just general activity fracas and may or may not turn out to be a real market'. And then I should have changed my view to Sell as soon as it became apparent they would invest heavily in that space.

I take some heart, however, that annual recurring revenue grew over 16% to $53.4 million. This is a $200 million company with net cash of over $25 million.

Overall, I remain uninspired by this investment. It has become more of an experiment in psychology and an example that I too am capable of bagholder psychology. However, my thinking is that hypothetically you could fire the board, and some of management, and cut a lot of costs out of the business, and probably achieve margins on 15% quite quickly, albeit without growth. Assuming that the company can maintain revenue of just $50 million in that scenario (which seems conservative given actual revenue was over $75 million), then you could quite plausibly have a company making $7.5 million in profit. If we assume multiple of 10 times earnings then that would probably give us a bottom end price where a financial pirate surely willing to step in to salvage what they may.

The playbook would be to take it private for a low price, dress it up nicely, and then sell it back to public market for perhaps 20x earnings in a few years (having added leverage).

Therefore, I would certainly not tell anyone to buy this stock.

Looking towards a more optimistic outcome, in the hands of more shareholder friendly management, I could see continued revenue growth (adding at least $10m per year) and some cost reductions. In that scenario we could probably have a company making some decent profits in 5 years, which is probably the sort of path that management are implying they are aiming for.

The company says they are "on track to generate positive cash flow at the Group level by FY21." This seems like a low bar given the various dynamics at play that mean cashflow is stronger than profits. It reminds me of "aim for the stars, hit the moon" -- only -- "aim for the toes, hit the ankle".

Probably the most bullish comment in the whole presentation is that they expect "double digit percentage growth in ARR". This reminds me of another company -- Appen (ASX:APX) that expected double digit growth and blew it out of the water. But when Catapult says it, I can't help thinking they mean closer to 10% than 50%. We'll see, I guess.

Even assuming 10% growth, we should see ARR go from $53.4 million to $58.8. At current prices that would put it on 3.4 times recurring revenue. It therefore could not be more evident that the market is rating Catapult as perhaps one of the lowest quality recurring revenue companies on the ASX. I don't believe that is true, so I'll probably keep holding my shares until the stock trades on (at least) 5 times ARR. However, I'd like to emphasise the point that I really might sell my shares in this company. I may sell without advanced warning: so consider this notice of my utter non-commitment to hold on.

I will however commit to hold on for another week past this very ambivalent post. But psychologically it's hard to justify deploying capital into a company I'm so uninspired by. Mathematically I think it's probably the right decision, but it's hard to say. I'm definitely unsure about this one.

Feel free to vote here to tell me what you think I should do.

Since I have been rather negative about these results, I guess it's only fair to but the other side of the story. I've not had much success getting Catapult management to talk to me (surprise, surprise) so here's what I got for you:

Very proud of Joe Powell, Mark Hall and the team for their achievements in 2018. It’s a wonderful achievement.
Side note: Interesting to hear the different questions on our growth story from institutional investors, often very dependent on where they are based geographically. https://t.co/Y1ILS6G0SX

Sell claude. You said it yourself that this company is too busy jetsetting and renting new offices to actually focus on profits. And senior management have basically using their insider knowledge to their own benefit. So what is there to like about it. The technology also has minimal barriers to entry. You can do half the stuff it does with a smartphone or a fitbit. It smells of lemons. Cut your losses and put your energy elsewhere.