It's been some time now since the Gentrack Group Ltd (ASX:GTK) FY 2018 annual results were released to market.

I discussed the results in this podcast, but I thought it might be useful to put some thoughts in writing.

As you can see below, growth on operating metrics by segment was fairly muted when you consider the recent acquisitions. 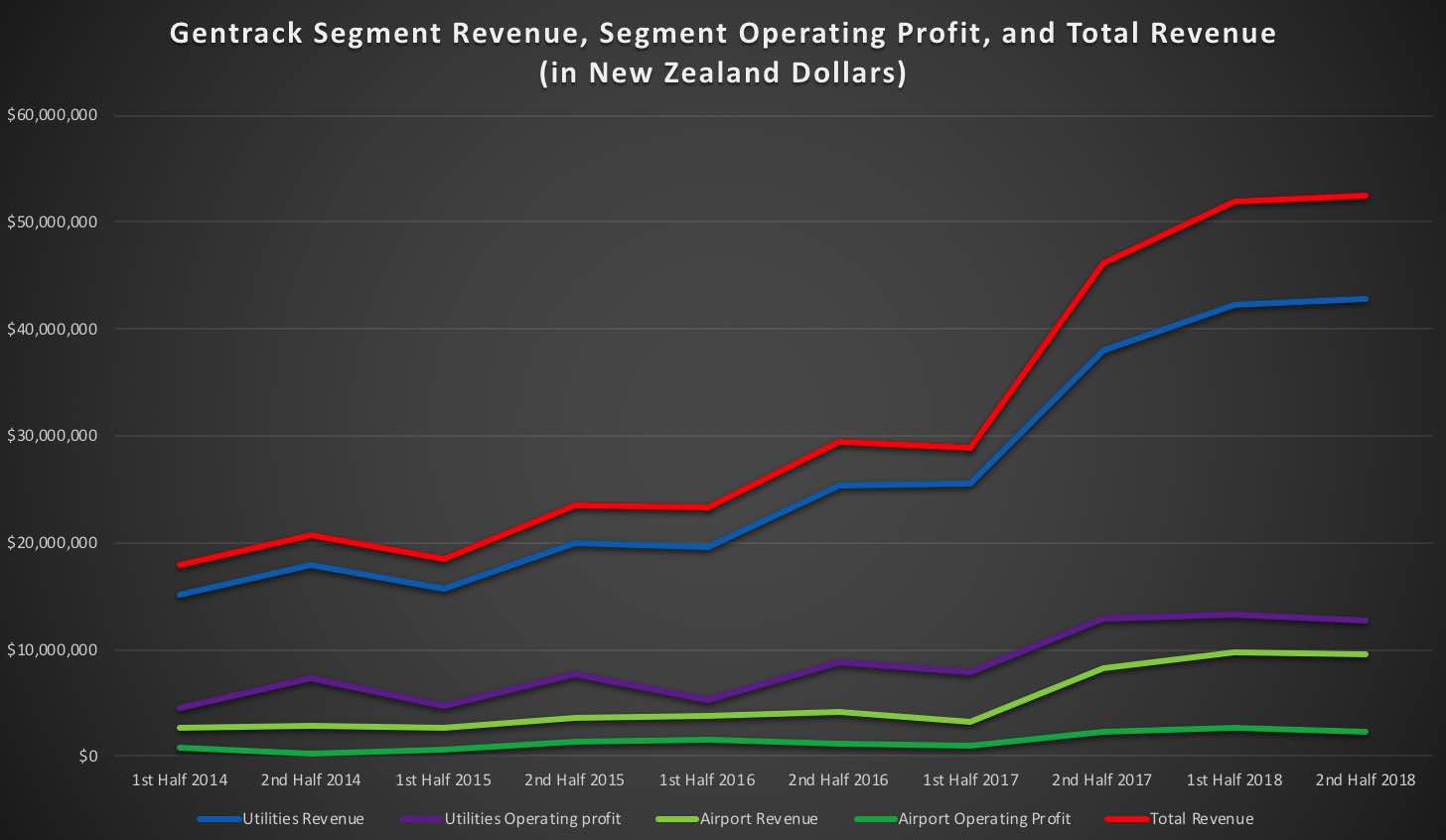 While the business has continued to grow, once you take into account the dilution associated with the capital raising of around NZD$90 million at A$5.69, these key metrics are all down on a per share basis.

Whilst it is de rigueur for investors to focus on per-share metrics based on a weighted number of shares, given that Gentrack is buying strategically and for growth, rather than for multiple arbitrage, I don't think it is particularly useful.

If we (perhaps harshly -- that's me) simply use the number of shares on issue (98,525,216) to calculate per share earnings, then we get just over 14 kiwi cents per share. That's about 13.2 cents per share at current exchange rates.

Put like this, you can see that the stock is still optimistically priced at A$4.80, which is over 36 times earnings.

Now, that means the stock is pretty expensive today, especially considering it fell short of broker analyst estimates, as you can see below.

For this reason, I think that in the short term there is plenty of potential downside. This view is compounded by the fact that on the earnings call the management forecast a tough 2019, with upgrade cycles in Australia unfavourable, and Brexit weighing on the UK business.

Why, then, would I buy more stock?

In my experience successful small-cap investing is all about finding those few multi-year winners, holding them, and preferably adding along the way (or else having a large enough initial position that you remain heavily weighted towards to long term winners.)

Gentrack is a profitable, cashflow positive software company with recurring revenue of about $64 million (all figures in NZD money unless otherwise stated). It has software-as-a-service style revenue of over $50 million, and this figure is growing quickly as it converts its customer base from licensing deals to software-as-a-service deals. Crucially, that process takes revenue and profit away from the near term, and pushes it to the long term.

Not only does this process depress today's profit to the benefit of tomorrow's but it also makes it easier for the company to continuously integrate new products from acquired firms, and cross sell them into the existing customer base.

This strategy makes sense. As an enterprise software company serving large utilities around the world, Gentrack has an important off-the-books asset; the trust of those companies.

The company is leveraging this by acquiring up-and-coming software companies in its space for high multiples. This is actually the opposite of multiple arbitrage, since Gentrack is typically buying companies on a higher multiple than it trades. This is arguably justified because Gentrack is actually trying to add value to the acquired businesses, by integrating and cross-selling their software. To my mind, this compares favourably to a company like Hansen Technologies (ASX:HSN) which tries to buy more mature businesses at a lower multiple. That strategy worked well when the Australian dollar was at multi-decade highs, and enterprise software company valuations were relatively low coming out of the GFC. But it works less well today, as can be seen by Hansen's lack of earnings-per-share growth.

Of course, the comparison is rather moot since the market assigns a much higher multiple to Gentrack -- there's no real edge here.

What I think is my edge in owning and accumulating Gentrack is that it displays the qualities of being a well run high quality stock that can keep growing for many years.

For example, it does not give specific guidance, suggesting it is not a slave to brokers. The chairman participated in the most recent capital raising, at well above current prices, suggesting that there is high level confidence in the strategy and direction of the company. Unlike many software companies, it has been able to grow revenue from $38 million to $104 million in four years, all while paying a dividend. In these heady days of valuing companies on revenue (regardless of the achievable steady-state net profit margins), that's rarer than you might think.

One of the worst examples of the brain-rot infecting software company investors is the apparent assumption that every software company can (one day, at least) achieve net profit margins of 10% - 20%. However, for non-critical software companies with questionable value-add, and a high cost of customer acquisition, this is far from fait accompli. When investors buy stocks like Livetiles (ASX:LVT) or Livehire (ASX:LVH) on valuations of hundreds of millions, they are essentially assuming eventual profit margins which, in my view, are very unlikely to be every achieved.

What Gentrack has, unlike this companies, is the ability to grow profitably for a very long time period. While fund managers might be thinking three or five years ahead, at most, I actually believe Gentrack could still be growing at well above GDP in 15 years, and there is very little chance that that is priced in.

Second, and most importantly, the strategy of buying faster growing unprofitable small software companies is one that only really pays off when you make the killer-purchase. Because humans have trouble understanding (and valuing) exponential growth, and because that growth is always uncertain, it is inevitable that Gentrack will overpay for some of its acquisitions (as is the case with CA+).

However, if Gentrack can pay a fair price for a great software product, then really put a rocket under its development and growth through the application of Gentrack's development teams (and sales department) then one or more of these acquisitions could turn out to be an absolute bargain.

To understand this reality you need to think about what it is like to be a small software company competing against large companies for the business of even larger utilities. It's hard. Very very hard.

You have neither relationships nor (in some cases) adequate access to software developers. You may be dependent on a few talented individuals for the development and upkeep of your product. You can barely afford the salespeople you need, and you're a relatively unproven -- even if you have the best product there is the old adage "you don't get fired for choosing IBM" working against you. For these companies to gain a few million (or tens of millions) in annual recurring revenue is no mean feat -- and its a smart time from Gentrack to buy, in my opinion. At that stage the product is somewhat legitimised in the market.

With over $10 million in cash and the capacity to borrow against predictable cashflows, Gentrack can continue to buy as opportunities arise.

I have kept space to buy more Gentrack shares over the next few years, since I think it may disappoint in a "risk off" environment. But I also increased my holding on the sell-off and I continue to think of the company as a core holding. If the company traded for less than 25 times earnings on poor sentiment I would have an appetite for building a large position. At current prices I think it's slightly undervalued on a long term view.

Disclosure: The Author, Claude Walker, owns shares in Gentrack at the time of publication. This article contains general investment advice only (under AFSL 501223). Authorised by Claude Walker.

Claude,
Thanks for the time you put into these forums. I'm learning a lot. But I have an issue with your view on Gentrack. As you have pointed out the path to expansion for Gentrack software is via the takeover of competitors. What this does is build up a huge value for intangibles on the Balance Sheet at the same time as saddling them with multiple versions of similar software. Their role then is to maintain each version. Sometimes software that works well "on top" is written badly underneath and this makes it difficult to maintain, particularly when you're new to the code supporting the application. Every advisor who supports software companies such as Gentrack have the "scaling" thing as their premise for future growth i.e. write the code once and sell it many times. Clawing back the intangible costs via the economies of scale is a slow process when multiple versions of code are an integral part of the day to day success. In your podcast the other day (GTK) you mentioned the employment of (I think) about 130 new employees. How does that align with the economies of scale thing. I've not seen many real software growth stories on the ASX for this reason. In fact it's riddled with slowing down stories (ADA, HSN, IRI, GBT ….) and they all rationalise the slowdown with some bad luck excuse when I think that for most of the time it's an issue with the business model. I've worked in software development, software implementation, software training etc so I've seen a fair bit of what it's like and it's a tough gig. Don't want to sound too negative but I thought it might be helpful to make you think about it momentarily rather than just sit back and keep my thoughts to myself.

I think this is completely reasonable and a very fine point. It has occurred to me also. I don't own Adacel, Hansen, Integrated Research or GBST -- but I do own Gentrack.

First of all I think they do a lot of in house development -- the huge increase in developers actually preceded the software purchases. As for how hard software is under the bonnet I completely agree with what you're saying. It's hard to know how much tech debt a software company has allowed to built up as the only people who will really know are the software engineers and management. In that regard I take it as a positive that a real array of Gentrack management participated in the last capital raising; I don't think that is something you would do if you saw a crippling amount of tech debt under the bonnet.

In terms of the economies of scale I completely agree that there is virtually no evidence that revenues are scaling over maintenance costs for Gentrack, and the complete opposite happened with GBST. Meanwhile Adacel just didn't invest in the product at all and now it cannot sell it. On the bright side, with Gentrack revenue does appear to be growing despite some failed acquisitions. There is evidence that there are economies of scale in selling, since oftentimes the solutions are complementary and aimed at the same clients. Furthermore, I also think it's too early to really tell if they are doing the right thing in terms of the code base, or not. Ultimately for this kind of company management must be willing to prioritise the elimination of burdensome tech debt over short term results. I am sure with his high ownership the chairman should be on board with that but whether that is flowing through the large team or not is more debatable.