Cash was down 23.4% to $12.5 million following the payment of $9.5 million of dividends and $2.0 million spent on buying back shares during the year. The company announced a final dividend of 2.5 cents as well as a special dividend of 5.0 cents bringing the total dividends declared in the year to 9.5 cents versus 11.75 cents last year, or a yield of 5.6% at current prices.

While NPAT and EPS both fell compared to 2017, underlying profitability actually improved. This difference is due to tax with a $1.4 million tax benefit recorded in 2017 compared to a $1.8 million tax expense for this year. Profit before tax (PBT) improved 29.8% to $10.2 million although this is still below the 2016 peak of $10.8 million. The company has available tax losses in Australia and tax credits in Canada in addition to $3.9 million of deferred tax assets on its balance sheet. These have an estimated value of $11.8 million and $10.1 million respectively and should reduce tax payments in future years.

Adacel typically generates more than two thirds of its revenue from North America with much of the remainder originating outside Australia. Therefore, the business is exposed to currency fluctuations and in particular the relationship between the Australian and US dollars. The Aussie has weakened around 8% against the US dollar in the past year and a continuation of this trend would be good news for Adacel’s Australian investors.

The company generates lumpy one-off revenue from the sale of its systems as well as recurring service fees once a system is installed. As the base of installed systems has grown over the years, so has the defensive quality of the business. 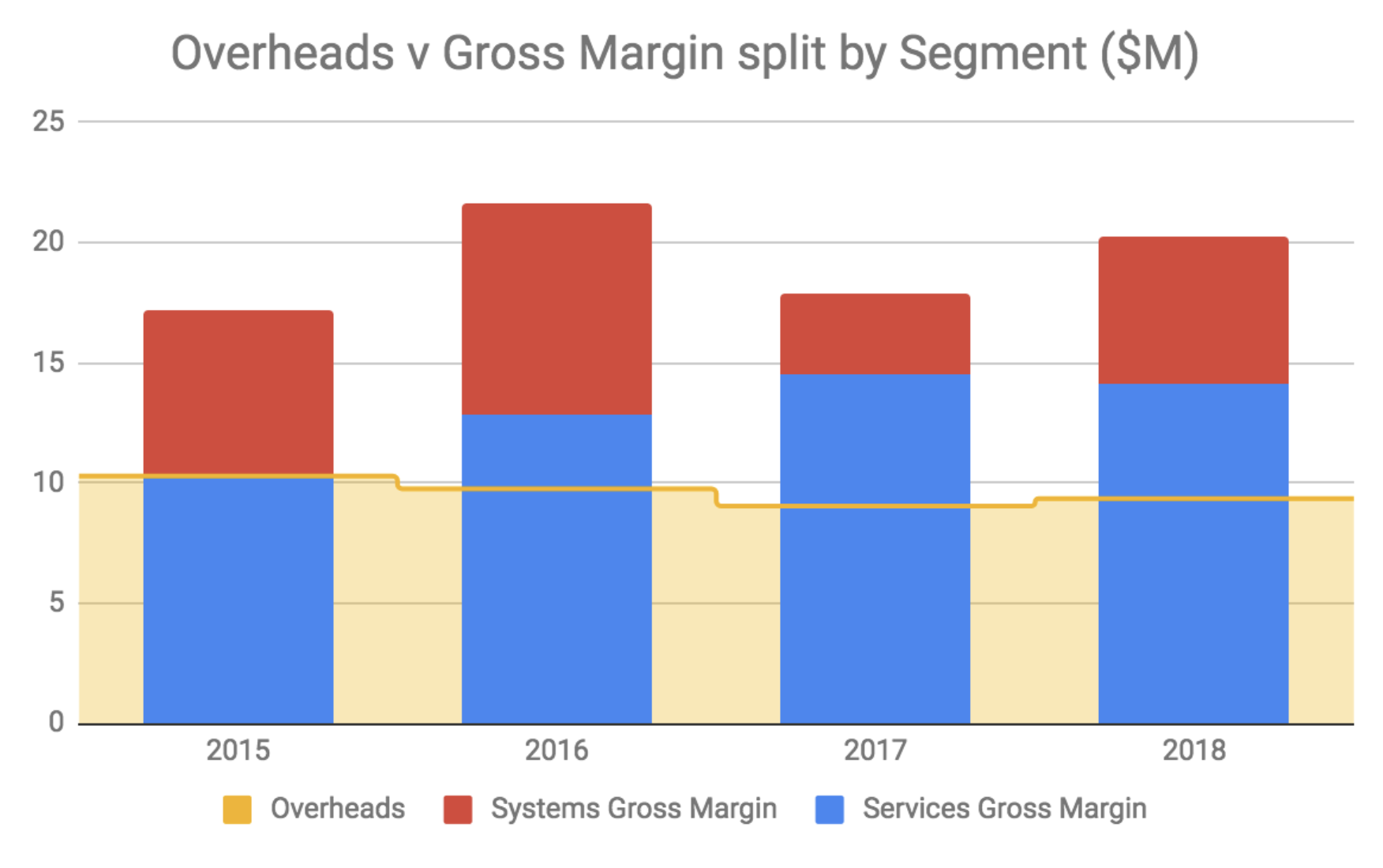 Note the chart above shows the tight cost control on display with overheads lower today than they were in 2015. This also highlights the scalability of the business.

As can be seen above, the stable services business now comfortably covers overheads and Adacel is far less dependent on the contribution from system sales compared to before 2015. Come the next recession, the company’s profit is not going to fall off a cliff, as was once the case.

It was good to see the services revenue return to half-on-half growth, after a weak first half. 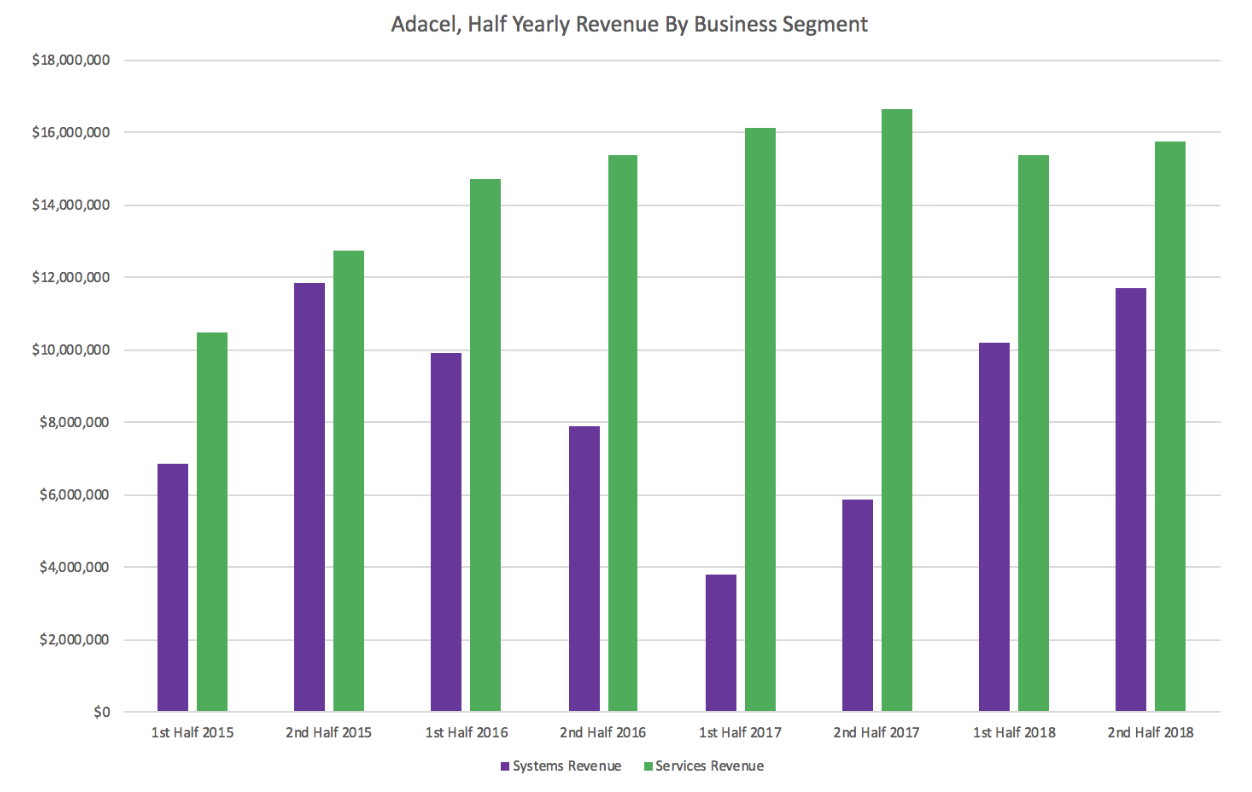 Adacel’s investing cash flow history provides further evidence of fiscal discipline. The company expenses almost all R&D investment and tangible fixed asset requirements are minimal. The ability to generate strong free cash flow enables Adacel to pay attractive dividends and is one of its best qualities from an investor point of view. 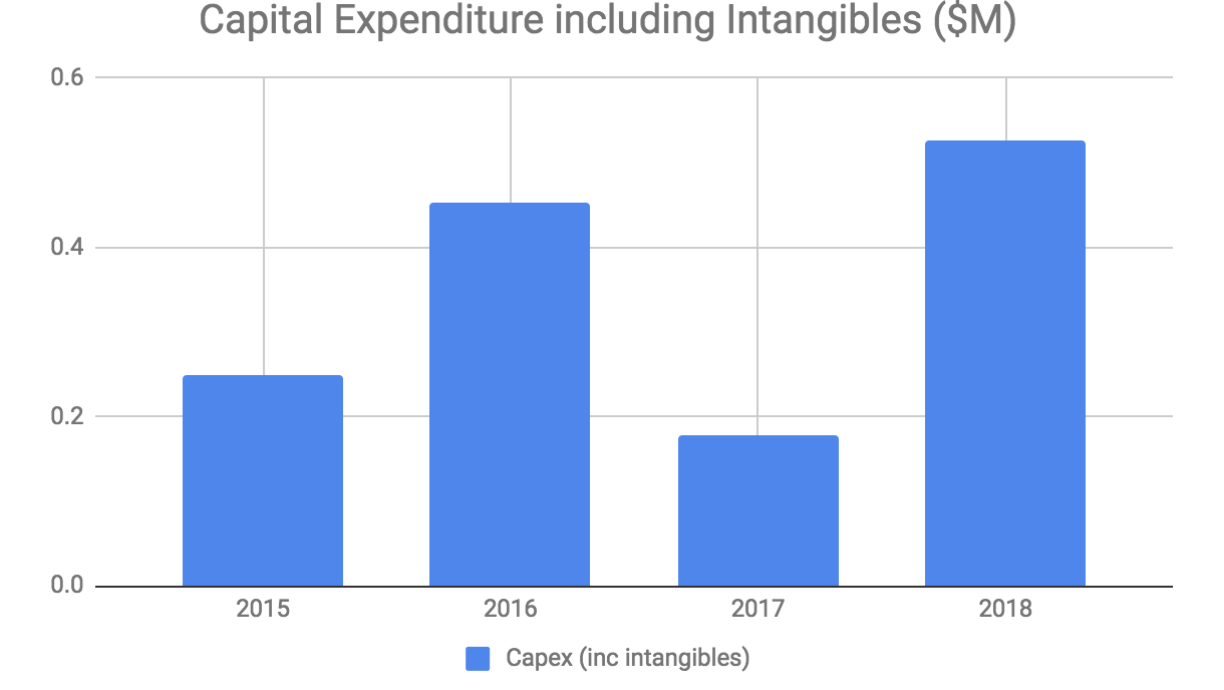 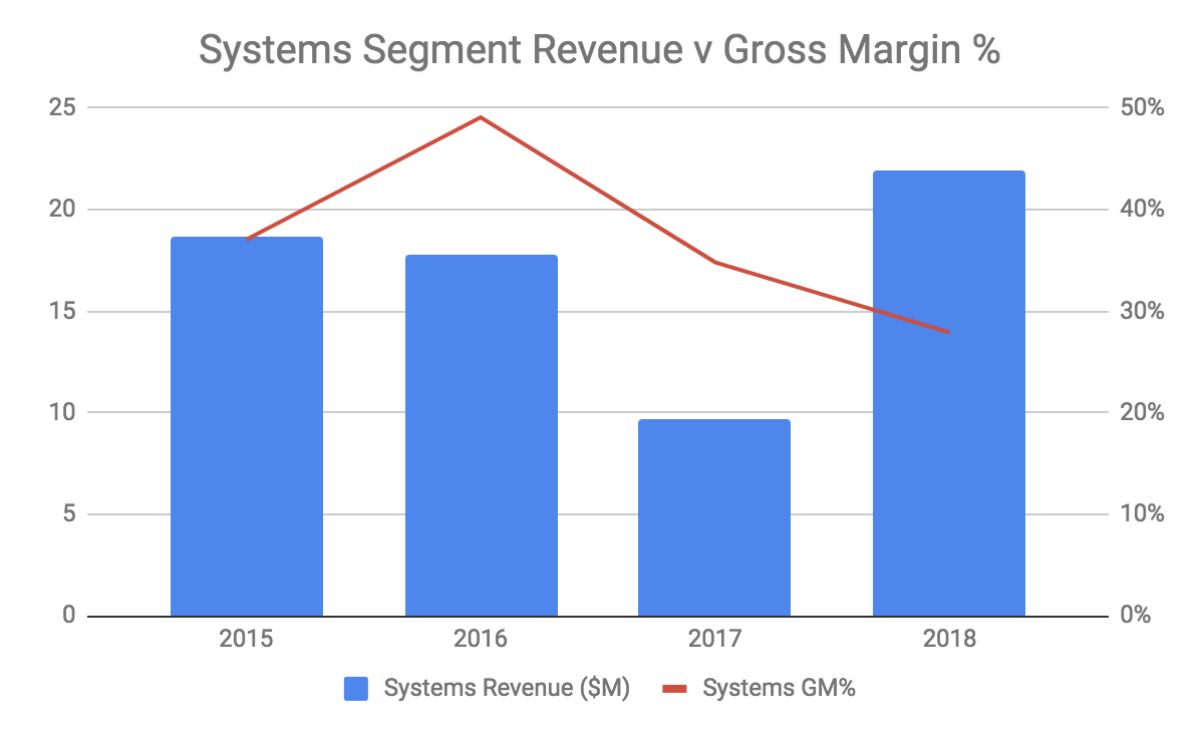 Intensifying competition has eroded the gross margin percentage of Adacel’s Systems division. It was 27.9% in 2018 down from 34.8% last year and is expected to continue falling in 2019.

This may not be as bad as it seems. Increasingly it is the services side of the business that drives performance and so discounting the price of systems to win business may be worth doing in order to realise more lucrative service revenue later on.

The company is looking to mitigate the lumpiness of revenue in its Systems division by broadening its product range including offering small footprint land-based ATM systems as well as the oceanic based systems for which it is known. It is also investing in R&D to expand the product range of its ATC simulator business. 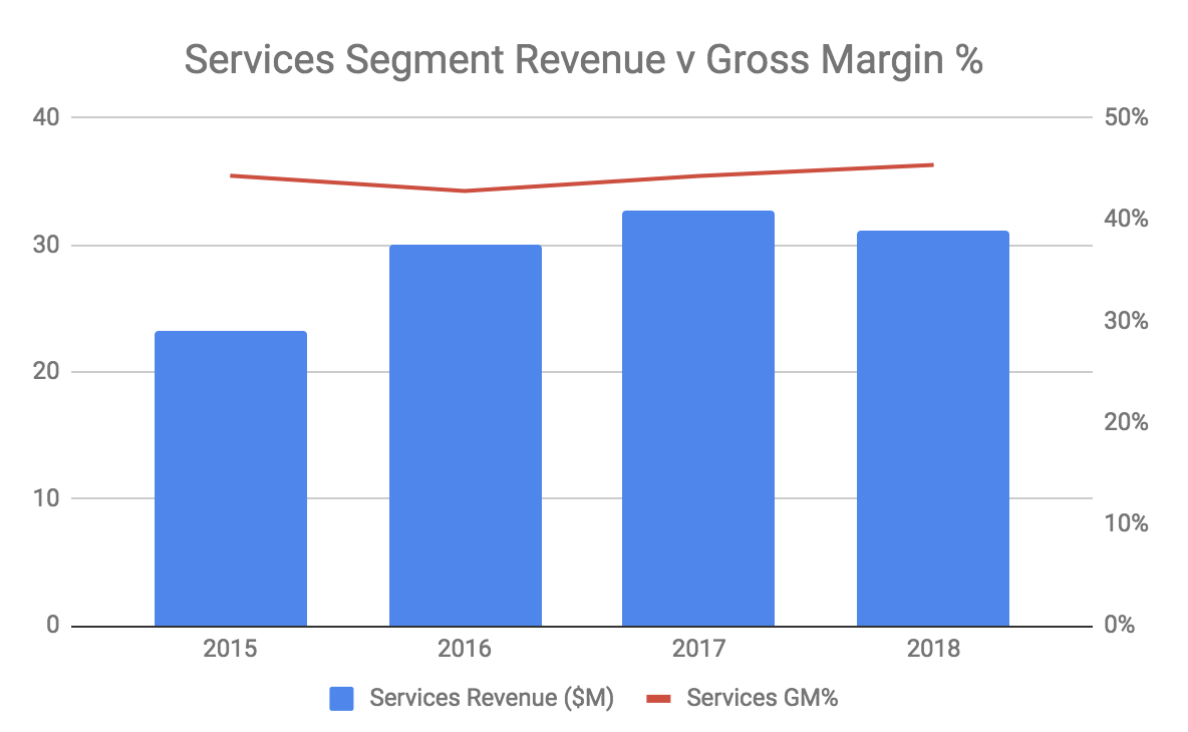 The Services segment represents the recurring revenue side of the business and is higher margin than Systems as can be seen in the charts above.

Last year, Adacel was impacted by the loss of a portion of a contract for support services it provides to the US Federal Aviation Administration (FAA). The company has formally protested this contract award and has halted delivery of software support pending the outcome which has further reduced revenue. This dispute drove a 5% fall in Services revenue in 2018 and in Friday’s investor conference call management revealed that the judge overseeing the case dismissed Adacel’s claim. The company has 30 days to appeal the decision.

The above contract loss was partially offset by growth in the separate and existing FAA Advanced Technologies and Oceanic Procedures (ATOP) contract. This is Adacel’s largest and longest serving contract dating back to 2000 and it generated service revenue of around $12 million in 2017. In September 2017 the company announced that the contract had been expanded with annual revenue increasing by 20%. Only 11% of this contract extension was delivered in 2018 and so it will contribute to growth in 2019.

It is worth noting how dependent Adacel is upon the FAA, although this risk is somewhat offset by the huge investment the civil aviation authority has already made in the company’s systems. If the company can reconcile its differences with the FAA then it is easy to see how Services could realise some growth in 2019, especially considering recent System wins.

In this piece which I wrote for Ethical Equities back in July 2015, I said:

“Putting it all together, Adacel is trading on a conservative forward enterprise value to free cash flow multiple of about 7x right now. It is by no means a perfect company because it is exposed to economic cycles, has a poor history and has powerful customers. However, it seems that Adacel has put its past behind it and that looking ahead conditions will be much more favourable.”

Fast forward to today and Adacel trades on a historical enterprise value to PBT multiple of 11.9. I am not sure if the outlook is as rosy today, as it was back then. In the prior article, I used PBT as a proxy for free cash flow because of the company’s available tax losses and credits. The PBT figure used in the previous calculation was my estimate for 2016 of $6.0 million, which turned out to be wildly conservative given the actual result was $10.8 million! For context, the 2015 PBT result was $5.9 million.

The share price closed at 60 cents on the day that my original article was published and the stock is trading at $1.715 at the time of writing giving a capital return of 185% in just over three years. Roughly half of this performance can be thought of as being driven by multiple expansion with the other half due to PBT growth. In addition, the company has paid 18 cents of unfranked dividends representing an income return of 30% over the period.

For the record, I bought my shares for 59 cents in May 2015 and sold them for $1.60 later that year. This was a pleasing result but it turns out that I sold much too early given the share price peaked at over $3 in 2016.

Adacel directors David Smith and Silvio Salom (also the company’s founder) sold 4.7 million shares between them in the second half of calendar year 2017 for at least $2.60 per share. These trades were well timed given the share price today is around 35% below those levels. It is worth paying attention to insider trading activity.

I do not consider that Adacel’s stock represents anywhere near as attractive a prospect today as it did back then. This is partly because it is now trading on a higher earnings multiple, but more importantly there is less visibility of future growth for the company. In July 2015, Adacel had just announced roughly $120 million of new contracts in the preceding few months. In contrast, I estimate the value of contracts announced in FY 2018 is less than $60 million.

Having said that, Adacel remains a reasonably priced decent quality business and although I am not tempted to buy shares right now, I would be fairly content to hold if I did own some in the absence of a superior opportunity.

Note from Claude: I think this is a very insightful write up, and I value Matt’s work here. I largely agree with his conclusions except for the fact that I’m a little more optimistic given the strong cash flow of the business. The company has been buying back shares and paying out dividends so it does seem to want to share that cashflow with shareholders. That’s not as common as I’d like.

Second, I could certainly envision this company being significantly bigger in a few years. Ultimately, however, I am concerned there has not been enough investment in software development and I do not hold shares myself. I would not rule out purchasing some, especially on share price weakness, but I’m not in a hurry.

Disclosure: Neither Matt Brazier nor Claude Walker own shares in Adacel at the time of publication. This article contains general investment advice only (under AFSL 501223). Authorised by Claude Walker.

Thanks for the write up Matt/Claude.
Not a good look, getting into a stoush with one of your largest clients.
It also sounded like there was an issue with their Sri Lanka client (answer in response to a Question over revenue recognition under new accounting rules). I didn't catch it all on the call. Do you have more insight?

It is also of concern that directors have been selling their stock heavily and that the executive management do not seem to want to back it with their own money (CEO&amp;CFO do not hold shares). The only KMP to hold any meaningful amount of shares has been selling heavily as well from 480K start of FY17 to 125K end of FY18.

Playing devil's advocate, one could argue that the Board/prominent shareholder have chosen to pay a special dividend (which is unfranked) rather than re-intiate buyback as a means of getting their cash out of the company which may be struggling to grow.

These are good thoughts to include, Scott. Thanks for commenting.

It isn't a great sign (to say the least) to see insiders exiting and this is another reason I've struggled to get excited about buying.

Yes, thanks for your thoughts Scott. I agree with you that it is unwise to fight with customers, especially when they provide a large proportion of revenue as is the case with Adacel and the FAA. However, at least the FAA also has plenty at stake given Adacel's installed base of simulators. I would imagine that replacing these would cause a lot of disruption on top of the cost of retraining staff and installing new systems.

Sorry, I didn't catch that part of the call regarding the Sri Lanka client but if there is an issue then it indicates that the FAA dispute is not an isolated incident which would be more concerning.

I find executive trading sometimes signals future share price and business performance and sometimes it doesn't. Heavy buying on market tends to be the best sign but a lack of buying doesn't mean much in my opinion. Regarding selling, I think heavy selling is less informative than heavy buying because there are multiple motivations for selling but is still worth thinking about, especially if there are supporting factors as you could argue is the case here.

Your point about the special dividend is interesting and you may be right that this hints at insider opinions on growth prospects and the current market valuation. Regarding growth, this would align with management commentary accompanying the results which includes little information on outlook other than that Systems margins continuing to fall and the enlarged ATOP contract offsetting any further revenue lost from the FAA dispute. Also and more generally, Adacel is a technology provider to two niche segments of the ATC industry being ATM simulators and Oceanic ATC. It already has dominant positions in both these sectors (I think from memory it has 95% of the ATM sim market in the US and its ATC systems help manage over 80% of global oceanic airspace) so it seems that growth prospects are limited within the company's existing markets (which is why they are looking to expand into land-based ATC systems).