5 Years Of Ethical Investing For Fun And Profit

Part of my process is to periodically take a look at my overall performance once a year (or two). The purpose is to hold myself accountable, and the other part is to force myself to try to think about lessons I’m learning, along the way. I use Sharesight to keep track of performance (and do my tax). This is convenient because many of my readers also use this software, so you can follow along at home!

The 37.63% figure is capital weighted annualised compound returns. Here is the Sharesight methodology.

The first thing to note is that recent performance has been strong, thanks in large part to the fact the the Pro Medicus (ASX:PME) share price has run so hard. This stock is my largest holding and you can see how, from mid 2016, I underperformed the market for a while. This was due largely to the fact that the Pro Medicus share price dropped after a strong run -- I anticipate near term underperformance for the same reason. As the CEO says, the share price has arguably gotten ahead of itself.

My worst listed investment was the wipe-out on New Solar Options (Class A) ASX:NEWOA, which scored me a handy -93.75%.

The second worst was -83.5% Jayex Healthcare (ASX:JHL), chaired by Michael Boyd. I will never invest in a company he is associated with, ever again.

Skip a few to the most embarrassing result of all time; my decision to sell Touchcorp (ASX:TCH), now Afterpay Touch (ASX:APT). This is by far the worst (investing) mistake I’ve ever made, for two reasons.

First, I sold the company for a loss of about 40%, and then it went on to merge with Afterpay, and multibag.

Second, worse, I also told other people to sell the stock, thus taking them with me on my worst mistake. It makes my heart a bit heavy to think about it, but I’m heartened by the kind words I have received over the years, resultant from wiser decisions.

To delve in to the error here, my problem was that I neither appreciated the potential (or likelihood of success) for Afterpay, nor did I trust the Touchcorp board to realise the value of the Afterpay shares they owned. Ultimately, like so many decisions as an investor, we make judgements about what people are going to do. I underestimated those people, which was a real mistake. There was enough alignment with the board that one could reasonably conclude that the incentives were there for the company to do the right thing. Although the results had been disappointing (and short of expectations set by the company) the stock was undervalued -- and I essentially made it more so by telling people to sell. The silver lining was that a fund we invest in bought shares in it, and has outperformed strongly.

Here’s a list of my top 15 losers (by absolute loss, not percentage) over the last 5 years, so you can marvel at my foolishness. 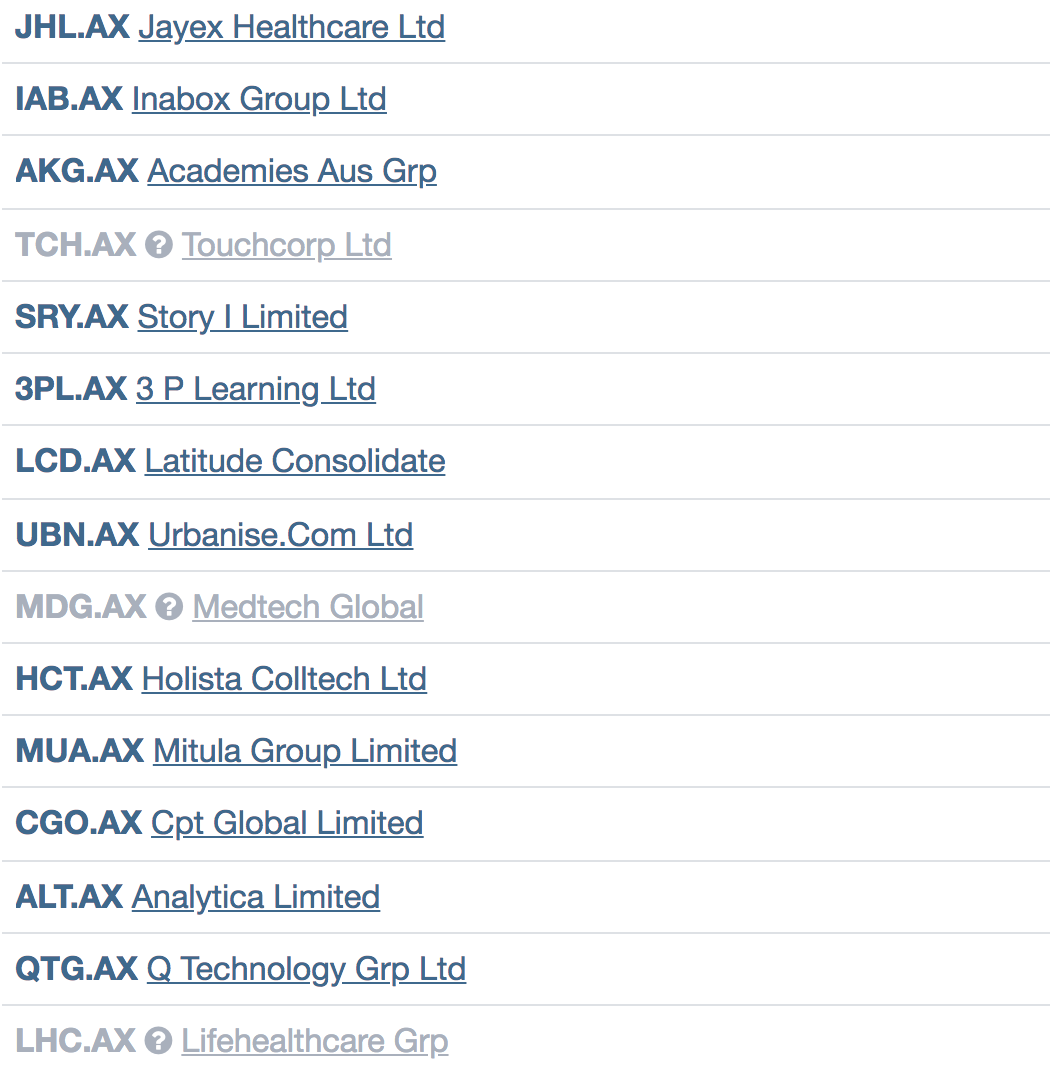 On to brighter subjects, here’s my top 15 winners over the last 5 years, also by absolute value. I think it’s more interesting to look at absolute gain or loss, because it takes into account position sizing.

Evidently, it's been a rewarding journey overall, but I've endured long periods of underperformance, and I've made many mistakes. The number one cause of bad decisions, for me, is making a decision too impulsively. As a general rule, it is much better if I am in a calm mindset before making a decision. Having said that there secondary cause of bad decisions is lack of animation -- not acting when I should. For example, I could have bought back in to Touchcorp when I realised I was wrong to Sell, rather than anchor to my incorrect decision until I was comprehensively proved wrong. Equally I could have sold Catapult (ASX:CAT) at higher prices when the founders were selling.

I would love to hear what you think of my mistakes and victories, as well as any of your own lessons from the last 5 years. So please sign up to the forums and let me know what you think!

If you'd like to see us survive, and you don't yet have a Sharesight account, please consider signing up for a free trial on this link, and we will get a small contribution if you do decide to use the service (which in turn should save you money with your accountant, or time if you do your own tax.) And  on top of that you can get 2 months free added to an annual subscription.

Thank you for your support!

I'm surprised that you sold FPS and I'd be interested in your reasons for doing so and how these stack up given 20/20 hindsight. I see this one as a good mix of dividend and growth. Because its performance is contingent on growing FUM, it is a sell on significant market weakness and a buy on return to bullish sentiment. Given that we have enjoyed a bull market over the last five years, I would have thought it was a good long-term hold.

Hi Theo,
I agree with your comments. I made a big mistake to sell the stock. I guess the leverage involved with a fund manager made me a little uncomfortable, especially since it is quite illiquid.

When I got a full time job I decided to end the Hypothetical Ethical portfolio so I thought I should sell something so leveraged before I stopped blogging about it. I then sold in real life so that my actions matched my words.

Ironically if I'd just walked away from it and come back to it 4 years later I'd have been laughing!

Touched on it here:
https://ethicalequities.com.au/blog/the-hypothetical-ethical-share-portfolio-final-update-10102014/

Hey Claude, great post, i recognise some from my own portfolio in both sides! I am interested in the benchmark - the performance seems very low, I use the SPAX2F15 because it takes into account franking credits for SMSF's, it has averaged about 8.5% annual returns or about 40% return over the 5 years. Why is there such a disparity? Even the ASX200 is up about 20% over the 5 years.

Thanks for the question. I don't think there is much of a disparity between the SPAX2F15 and SPW, since they show 8.5% and 7.8% returns -- with the former including franking credits. That's in the ballpark of what you'd expect.

The remainder would mostly be to do with the fact that sharesight uses capital weighted annualised returns. So the question the benchmark is analysing is:
What would have been the returns from investing my capital into SPW instead of into whatever stock I bought that day.
Here's the explanation of the methodology: https://help.sharesight.com/au/performance_calculation_method/

If thats the case, are you showing a 38% return pa ? That would be mighty impressive!

My top lesson has been to pay more attention to management.

Significant crashes from the last few years that come to my mind include BKL, SGH, SRX, STO, VTG, RFG and BLA. Most of these I was fortunate enough to only watch from the sidelines though I was burned by a couple. All involved management or boards making very self-serving decisions.

Conversely my biggest winners in recent times would be ALU, CSL, CCP, CZZ and NST; all of which have management teams with a record of taking care of shareholders at the same time as themselves.

As a retail investor I don't get to meet many company execs so identifying excellent management is not easy, but I now invest with conviction when I believe I have identified good people and also keep a blacklist of management I don't want anything to do with in the future.

No, "i guess" about it! 38% per year over 5 consecutive returns puts you up there with the best investors in the world!